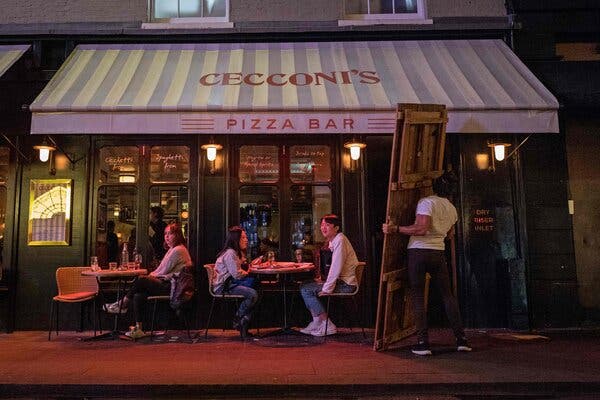 Mnuchin and Pelosi inch toward resuming stimulus talks as economy continues to struggle.

Top Democrats on Thursday were crafting a $2.4 trillion package — about $1 trillion less than the measure the House approved in May — that could either serve as a new basis for the Democratic position in negotiations or be voted on as a stand-alone package in the coming days, according to a senior Democratic aide.

About 825,000 Americans filed for state unemployment benefits last week. That is up from 796,000 a week earlier, though it is far below the more than six million people a week who were filing for benefits during the peak period of layoffs in the spring. By any measure, however, hundreds of thousands of Americans are losing their jobs each week, and millions more laid off earlier in the crisis are still relying on unemployed benefits to meet their basic expenses. Applications for benefits remain higher than at the peak of many past recessions, and after falling quickly in the spring, the number has declined only slowly in recent weeks.

Tech stocks dragged stocks to their fifth decline in the last six sessions.

Stocks have been retreating since that Sept. 2 peak, as investors rotated out of the high-flying tech shares and concerns grew about the state of the economy. A key worry has been Washington’s inability to reach a deal on a new economic aid package, and the gridlock between Democrats and Republicans has only worsened since the death of Justice Ruth Bader Ginsburg last week.

Disney delays the release of ‘Black Widow,’ ‘West Side Story’ and other films.

Britain issues a U-turn for office workers, urging them to stay home.

Companies that had been under pressure from British government ministers to get employees back to the office were scrambling to change their guidance for staff. Some had organized rotation systems to alternate different teams in the office to ensure social distancing. Others supplied personal protective equipment, created one-way systems to move around offices and reconfigured desk spaces. Both JPMorgan Chase and Goldman Sachs were at about 30 percent capacity in their London offices.

The S&P 500 rose more than 1 percent and the tech-heavy Nasdaq composite climbed nearly 2 percent. Amazon and Twitter gained more than 6 percent to become the best performing stock in the S&P 500.

President Trump says China must cede control of TikTok or he ‘won’t make the deal.’

Asked about reports that TikTok’s Chinese owner, ByteDance, would still own 80 percent of the service after the deal, President Trump said that they would “have nothing to do with it, and if they do we just won’t make the deal.” He said Oracle and Walmart, which under the deal would take a 20 percent stake in the new company, TikTok Global, would control the service.

Shares of companies that are sensitive to the pandemic and the return of restrictions on travel in particular fared poorly on Monday. Delta Air Lines fell more than 9 percent, for example. Sectors of the market relatively immune to the ups and downs of the business cycle, including some large-cap technology companies fared better. Apple and Netflix climbed more than 3 percent. Countries around the world are reporting significant increases in coronavirus cases, just as cooler weather comes to the northern hemisphere, drawing more people inside. 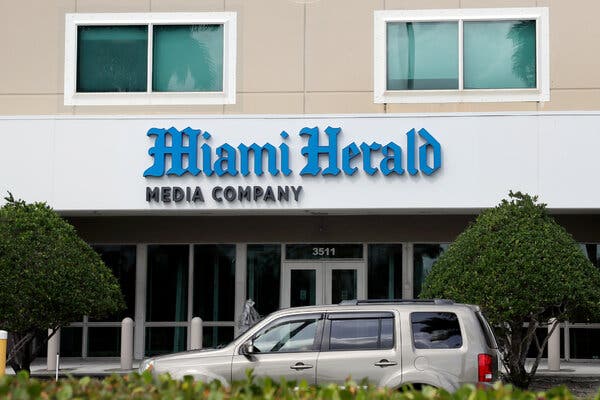 The Miami Herald said it would no longer publish Libre, a paid advertising supplement in El Nuevo Herald, a sibling publication.Credit...Wilfredo Lee/Associated Press

A top editor of The Miami Herald’s Spanish-language sister publication, El Nuevo Herald, has resigned and its publisher has been demoted after a racist and anti-Semitic column was published in a paid insert inside the newspaper this month.

Kristin Roberts, vice president of news at McClatchy, which publishes The Herald and El Nuevo Herald, announced the leadership shake-up on Thursday in an email to staff, which The New York Times obtained.

Aminda Marqués González, the executive editor and publisher of The Herald and El Nuevo Herald, will no longer be publisher, a job she had held since April 2019, but will remain executive editor.

“What kind of people are these Jews?” Mr. Luque-Escalona wrote. “They are always talking about the Holocaust, but have they now forgotten Kristallnacht, when Nazi thugs razed Jewish businesses throughout Germany? The same is being done by B.L.M. and Antifa, only the Nazis did not rob; they only destroyed.”

Ms. San Martin and Ms. Marqués apologized to readers several days after the column was published, saying: “The fact that no one in leadership, beginning with us, had previously read this advertising insert until this issue was surfaced by a reader is distressing.”

In a statement last week, McClatchy said an internal review had resulted in a termination of the company’s commercial relationship with Libre. 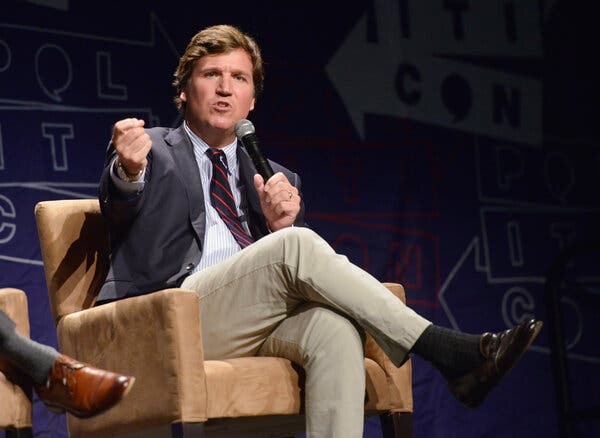 Fox News won a legal victory on Thursday after a federal judge dismissed a defamation suit brought against its host Tucker Carlson by a former Playboy model who said she had an affair with Donald J. Trump before he was president.

The suit, filed last year, stemmed from a 2018 episode of Mr. Carlson’s show in which he accused the model, Karen McDougal, of extorting Mr. Trump. She sold the rights to her story of an affair to The National Enquirer in 2016, which did not publish the story, a transaction that involved Mr. Trump’s former longtime lawyer, Michael D. Cohen.

“The statements are rhetorical hyperbole and opinion commentary intended to frame a political debate, and, as such, are not actionable as defamation,” she wrote.

In reaching her decision, Judge Vyskocil relied in part on an argument made by Fox News lawyers: that the “general tenor” of Mr. Carlson’s program signals to viewers that the host is “engaging in ‘exaggeration’ and ‘nonliteral commentary.’” The judge added: “Given Mr. Carlson’s reputation, any reasonable viewer ‘arrive[s] with an appropriate amount of skepticism’” about the host’s on-air comments.

In other words, Mr. Carlson’s viewers may not necessarily believe everything they hear.

A lawyer for Ms. McDougal, Eric R. Bernstein, said in an email on Thursday that the decision was “unfortunate” and that he and Ms. McDougal were considering their options.

The reforms of Manchester United and Liverpool are reminiscent of the history of the Premier League. Then the tops got tired of social justice and wanted freedom
Thomas Muller: Bayern are confident, we are in good shape
Anton Miranchuk about the match with Bayern: we Go out to win and set the highest goals
Frankie de Jong: life in Barcelona is so pleasant that it may seem as if you are on vacation for a whole year
Donnarumma, Hauge and three members of the Milan team were infected with the coronavirus
The 37-year-old Ribery is at the top of Serie A in pressing, dribbling, speed and assists. And educates young and thinking about becoming a coach
Real Madrid want to resolve the issue of Ramos' contract as soon as possible
Source https://www.nytimes.com/live/2020/09/25/business/stock-market-today-coronavirus

Women on Qatar Airways Flight Say They Were Strip-Searched

Black Americans are fired up and flocking to the polls

Sen. Susan Collins To Vote Against Barrett Confirmation To the Supreme Court

3 reasons markets could be in for a bumpy week

Facebook wants to add cloud games to its platform, but you won't find them on Apple devices

If You Aren't Leveraging Email Marketing, This 7-Course Bootcamp Can Show You How

The messy politics of Nextdoor

Build an Ecommerce Store on Shopify with Help From This Bootcamp

See Jennifer Lopez's Most Iconic Looks Through the Years

How the Future of Packaging Automation Will Be Ruled by Robots

Prince Harry urges everyone to join the ‘global movement’ of protests

The adult amusement park of yesterday, the Holiday Inn Holidome

The Italian town auctioning off abandoned homes for €1

What you need to know about coronavirus on Monday, October 26

Abbreviated Pundit Roundup: In the homestretch, Republicans smell the stench of defeat

Families are bored, so Monopoly sales are soaring

'India's air is filthy' remark by Trump hit a nerve? It's time to act

Turkish lira drops to record low over US sanction threat

Turn your clocks back before you go to bed on Halloween

Fights erupt between pro-Trump caravan and protesters in NYC

Lewis Hamilton vs. Michael Schumacher: Who is the greatest?

Lithuania swings to the center-right as opposition wins vote

A New Covid Outbreak at the White House

Column: A pile of stacked boxes at the University of Chicago - exhibitionism or architecture?

Vote Smarter 2020: Will Precincts Be Open On Election Day?

Daywatch: Property taxes climb higher than other bills, Lightfoot counts on big increase in speeding tickets and how you can help save monarch butterflies

How can we do Halloween safely during Covid-19? Advice from CNN's Dr. Leana Wen

Liz Weston: How losing Obamacare could cost you