Conspiracy theorists won a major victory on Tuesday as a Republican supporter of the convoluted pro-Trump movement QAnon triumphed in her House primary runoff election in Georgia, all but ensuring that she will represent a deep-red district in Congress.

The ascension of Marjorie Taylor Greene, who embraces a conspiracy theory that the F.B.I. has labeled a potential domestic terrorism threat, came as six states held primary and runoff elections on Tuesday.

Those races included a well-funded Democratic primary challenge to Representative Ilhan Omar of Minnesota, who was hoping to make a clean sweep of re-election fights for the group of first-term Democratic congresswomen of color known as the Squad.

The voting unfolded as elections officials across the country continue to grapple with the challenges of the coronavirus pandemic, using primaries as lower-turnout dry runs for the November general election. The electoral contests on Tuesday in Wisconsin and Georgia bore particular scrutiny after voting meltdowns in each state earlier this year. The balloting in both places appeared to be unfolding more smoothly this time, though there were worries about the number of absentee ballots still in the mail in Wisconsin.

In Georgia, Ms. Greene defeated John Cowan, a neurosurgeon who is no less conservative or pro-Trump, according to The Associated Press, holding a lead of about 20 percentage points around 10 p.m. Eastern. The result is likely to unsettle mainstream Republicans, who have sought to publicly distance themselves from QAnon supporters running for congressional office this cycle even as they quietly support some of them.

Now, with Georgia’s 14th Congressional District, one of the most Republican in the country, likely to vote red in November, Ms. Greene is all but assured of getting the chance to put into action her talk of rooting out an imagined deep-state cabal of pedophile Satanists who are trying to take down President Trump.

QAnon, a conspiracy theory that has attracted a fervent following since it emerged from the troll-infested fringes of the internet nearly three years ago, has already inspired real-world violence, including the killing of a mob boss. Its supporters are slowly becoming a political force that some Republicans feel they cannot afford to alienate, even as the party struggles to distance itself from racist and anti-Semitic conspiracy theories.

More than a dozen candidates who have expressed some degree of support for QAnon are running for Congress as Republicans, their path cleared by Mr. Trump’s own espousal of conspiracy theories.

Most are going to lose. But a few, Ms. Greene foremost among them, have managed to win primaries against Republicans whose only real ideological difference was that they don’t believe in QAnon.

During his campaign, Mr. Cowan adopted a slogan that summed up the predicament that Ms. Greene posed for Republicans: “All of the conservative, none of the embarrassment.”

“She is not conservative — she’s crazy,” Mr. Cowan told Politico before the runoff. “She deserves a YouTube channel, not a seat in Congress. She’s a circus act.”

Mr. Cowan was not alone in his assessment of Ms. Greene, who runs a construction company with her husband. She earned a rebuke from Republican congressional leaders this year after Facebook videos showed her making offensive remarks about Black people, Jews and Muslims. Representative Steve Scalise of Louisiana, the House minority whip, publicly campaigned for Mr. Cowan and helped him raise money.

“She is not at all the kind of person we should have representing our state and serving in Congress,” said Karen Handel, a Georgia Republican and former House member who is running to retake her old seat from a Democrat in the state’s Sixth Congressional District.

The Republican Party, though, was hardly uniform in its opposition to Ms. Greene’s candidacy. The leadership officially remained neutral, and Mr. Trump’s only comment on the race came in the form of a congratulatory tweet after Ms. Greene’s strong showing in the first-round primary in June, when she won 40 percent of the vote to Mr. Cowan’s 21 percent.

Ms. Greene raised thousands of dollars from Representative Jim Jordan of Ohio, a high-profile Republican lawmaker and a favorite of the president, and a political action committee with which he is associated, the House Freedom Fund. She also secured modest four-figure donations from political action committees associated with Mark Meadows, a former North Carolina representative who is now Mr. Trump’s chief of staff, and Koch Industries, a financial mainstay of the Republican Party.

In Minnesota, Democrats had rallied to Ms. Omar’s aid in recent weeks, making bedfellows of progressives such as Representative Alexandria Ocasio-Cortez and establishment leaders like Speaker Nancy Pelosi. 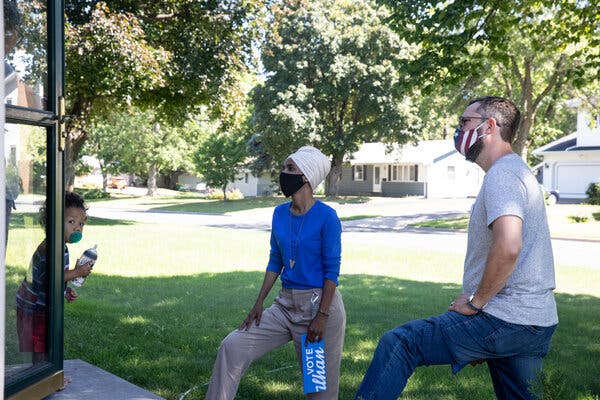 Representative Ilhan Omar and her husband, Tim Mynett, knocked on doors to encourage people to vote on Tuesday.Credit...Jenn Ackerman for The New York Times

Ms. Omar’s unabashed embrace of left-wing politics has won her loyal followers, both in Minnesota and across the country. She has, however, also become a lightning rod for conservatives and has faced criticism from some Democrats, particularly after several episodes in 2019 in which she was accused of making anti-Semitic remarks.

On Tuesday afternoon, Ms. Omar courted voters at a market in Minneapolis, ordering Mexican food and eating with staff members with no sign of concern.

“Everything in this primary has felt troubling, from the money coming to the overt xenophobic messaging,” she said. “But this is the Fifth. This is Minneapolis. This is the place not only to make an overt statement about how excited they are to have immigrants in their neighborhood, but they voted one into Congress.”

Later, at an evening campaign event in Dinkytown, a Minneapolis neighborhood where Ms. Omar likes to spend election nights talking to voters, young supporters gathered as people in cars drove past yelling “Ilhan!” and “We love you!”

Britt D’Arezzo, 22, said national perceptions of Ms. Omar didn’t account for her retail politics and her visibility at home.

In Wisconsin, where worries have persisted over the ability to hold smooth virus-era elections since an election fiasco in April, there were no hourslong, mask-clad lines wrapping around Milwaukee city blocks.

But one looming concern was the large number of absentee ballots in the mail. While the April primary eventually settled on a “postmarked by” deadline for absentee ballots, meaning any ballot put in the mail by Election Day would count, no such relief was provided for Tuesday’s election; ballots had to be in clerk’s offices by the time polls closed.

In Georgia, the scale of the elections was much smaller than during the chaotic June primary, with roughly 90 of the state’s 159 counties holding elections on Tuesday.

There were no grueling lines as in June, but election security activists worried that the low turnout had masked some glitches, largely with the state’s electronic poll books and check-in system, that could have been problematic had they occurred during an election with higher turnout.

“The severity of those problems that we saw, while they were not huge in quantity because of the low level of people voting,” said Marilyn Marks, the executive director of the Coalition for Good Governance, an elections watchdog group in Georgia, “they clearly are going to create serious problems in November.”

Vidal said goodbye to Barca: Proud to have worn this shirt and played alongside the greats
Sporting renamed the Academy in honor of Ronaldo
Suarez will receive 9 million euros a year at Atletico
Liverpool will not buy anyone else in this transfer window
Semedu will move to Wolverhampton for 35 million euros. Contract - until the summer of 2025
Bosnich about Kepa's mistake: I don't think this is the end. He needs a competitor
Rakitic finished his career with the Croatian national team
Source https://www.nytimes.com/2020/08/11/us/politics/marjorie-taylor-greene-qanon-georgia-primary.html

‘Wakanda Doesn’t Have Suburbs’: How Movies Like Black Panther Could Help Us Save the Planet

Beyoncé and Jay-Z spotted out for dinner with Solange

Emmys 2020: How To Stream All The Emmy Winners

Bobcat Fire in California becomes one of largest in Los Angeles County history, whips up 'smokenado'

Poisoned opposition leader demands his clothes back from Russia

The Best and Worst Moments of the 2020 Emmys

President Trump calls injured Compton deputies, one of whom can't speak and wrote out her responses

Exclusive: Kushner and Soros-backed real estate startup Cadre is going back on offense

Trump says he will announce Supreme Court nominee this week

Did You Catch ‘Ratched’s Nod to ‘The Green Mile’?

Shaq buys a Las Vegas home near his chicken restaurant

When did good governance become an “armageddon option”?

How to Know if an Online Marketing Expert is Actually Credible

The first polling tidbits after the death of Justice Ginsburg.

Atlanta man attacked by shark while snorkeling in Florida Keys