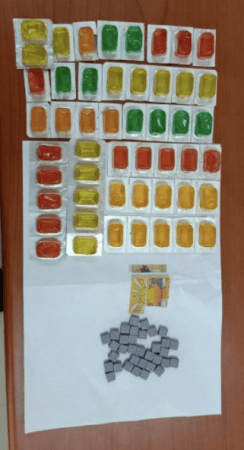 The Bengaluru city police have been cracking down on the drug racket in the city and the state. On Friday, the CCB arrested two individuals in the city for the possession of drugs such as Marijuana jelly, LSD and ecstasy.

This is one of the many cases that the CCB has busted in the past week alone. With the ongoing probe into the Sandalwood drug racket, the new clampdown has surprised the public.

In the mission to make Bengaluru a drug-free city, the police have been working hard at uncovering the drug network. On Thursday, the city police arrested a man for selling 'brown sugar' as Sai Baba's 'prasad' in small packets. The 25-year-old Vikram Khileri had been living in Bengaluru and was arrested through a decoy when he came to sell 90 gm of the drugs at the City Market.

On Thursday, in another case, the city police arrested three drug peddlers who were in possession of 90 kgs of ganja. The Karnataka Police also uncovered a marijuana field in Chitradurga recently which had been cultivating the plant and seized 9,872 kgs of the drug worth 4.02 crores of rupees.

As the investigation into the drugs racket in the state continues, it wouldn't be wrong to expect more such cases in the coming weeks and months.

Barcelona confirmed the resignation of Bartomeu as President
Joshua Kimmich: We should have finished the game with Lokomotiv earlier, but we didn't have any obvious moments
Manuel Neuer: Loko played very well. Bayern had to work hard to win
Lewandowski has not scored a point in two rounds of the Champions League. Last season, he failed to do so only in the final
Bayern extended their record streak to 13 consecutive wins in the Champions League
Ronaldo will not play Barcelona (Romeo Agresti)
Ole Gunnar Solskjaer: Leipzig impressive progresses. He is aiming for trophies
Source https://www.ibtimes.co.in/marijuana-jelly-ecstasy-lsd-bengaluru-police-high-seizures-2-arrested-828237