The man charged with killing two students and wounding four others on a North Carolina college campus in April has pleaded guilty to two counts of first-degree murder. Trystan Andrew Terrell, 22, also pleaded guilty Thursday to four counts of attempted murder and discharge of a firearm on educational property.

State prosecutors accepted Terrell's plea during a hearing that was previously scheduled to decide whether the gunman could face the death penalty for the killings at the University of North Carolina at Charlotte. The charges were filed in connection with the April 30 shooting as classmates gathered in a lecture hall.

When it came time for the defense to respond to victims' families, Terrell apologized. "I am so sorry to everyone," he said. "If I could go back in time to that classroom, I would back out of it. I made a mistake."

Terrell told investigators he gave up on the attack after being tackled by one of the students who died.

During the hearing, victims and their families were given the opportunity to speak. Julie Parlier burst into tears as she read a statement to the court. Her 19-year-old son, Ellis, was one of those who died.

"We will never forgive (Terrell) for his actions," Parlier said. "If the defendant wanted to kill someone, he should have turned the gun on himself."

She added: "May you rot in hell and suffer torture."

Investigators said in released documents that Terrell spent months planning the shooting at the school he formerly attended. He told investigators he gave up on the attack on the spring semester class's last day after being tackled by one of the students who died, Riley Howell.

Howell "took the fight to the assailant" and "took the assailant off his feet," Charlotte-Mecklenburg Chief of Police Kerr Putney said after the shooting. If it wasn't for what Howell did, he said the assailant "may not have been disarmed."

"Unfortunately he gave his life in the process, but his sacrifice saved lives," Putney said. 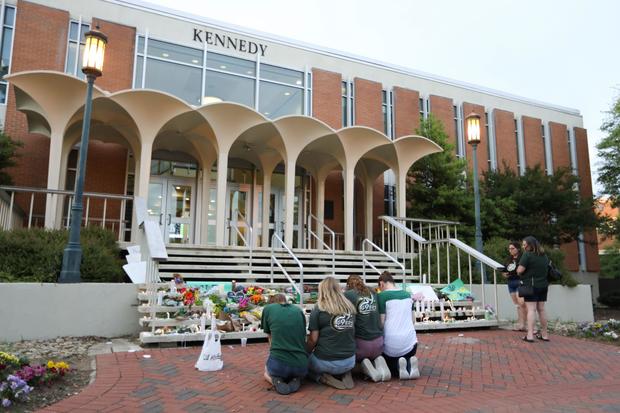 Students and faculty kneel to pray at the University of North Carolina Charlotte on May 1, 2019. Getty

Witnesses said the gunman took aim at a specific table in the classroom, but it wasn't clear if he was targeting one or more of the students in particular. The faculty member who taught the class has said Terrell was enrolled in the course but quit attending in January.

"I just went into a classroom and shot the guys," Terrell told reporters hours after the shooting as police officers led him handcuffed into a law enforcement building.

Howell, 21, of Waynesville, and Ellis Reed Parlier, 19, of Midland, died after each was shot multiple times, their autopsies said. Those wounded were Sean Dehart and Drew Pescaro, both of Apex; Emily Houpt of Charlotte; and Rami Alramadhan of Saihat, Saudi Arabia.

The accused gunman’s father is in the court room. @WCCBCharlotte pic.twitter.com/nsfJaTpXB7

One of the victims objected to the district attorney's office agreeing to the guilty plea, which effectively allows Terrell to escape the death penalty.

Terrell "knew he wanted to get life in prison when planning this violent act and the DA's office is rewarding him by giving him exactly what he wanted," Pescaro wrote in a detailed statement, obtained by CW affiliate WFMY-TV. "It's sickening and it makes me disappointed in the DA's office, the City of Charlotte, and the State of North Carolina."

Willian's agent: he wants a 3-year contract. Chelsea's policy is to renew for a maximum of 2 years
The PSG doctor reported that Di Maria has insomnia and depression due to the pause in the season (Le Parisien)
Inter still claims Lacazette. The club sees him as a replacement for Lautaro
Atletico defender Savic is Interested in Monaco
The Leipzig goalkeeper gave out a perfect goal pass to Werner. With one pass, I cut off all my opponents and brought them out one on one
Chelsea want to acquire Werner, promising the player more playing time compared to Liverpool
Dennis Bergkamp: Henri killed the intrigue in matches. He is the best player in this role that I have ever seen
Source https://www.cbsnews.com/news/unc-charlotte-shooting-suspect-pleads-guilty-first-degree-murder-today-2019-09-19/

Protesters Dispersed With Tear Gas So Trump Could Pose at Church

'Revolting': Trump Gets Holy Hell On Twitter For Using Bible As Photo-Op Prop

Lead prosecutor in George Floyd case on probe's next steps

E!'s Nina Parker Challenges People to ''Speak Up'' in Powerful Call to Action on Racism

Anderson Cooper Tears Into Donald Trump’s “Law And Order” Approach To Protesters: “He Calls Them Thugs. Who Is The Thug Here?”

Trump Vowed to Disrupt Washington. Now He Faces Disruption in the Streets.

DC Episcopal bishop: 'I am outraged' by Trump church visit

Federal judge upholds use of sedative in Arkansas executions

Rush Limbaugh clashes with 'Breakfast Club' hosts: 'I don't have any white privilege'

The homes frozen in time on an abandoned Hong Kong island

Boris Johnson's Brexit nightmare is back at the worst possible moment

Ivanka tweets Bible verse to 'heal' protester pain, but Trump policies only add to it

LAPD Chief Michel Moore Says George Floyd’s Death Is On Looters’ Hands “As Much As” Officers’, Then Says He Misspoke

Trump says he is "your president of law and order"

Mi Notebook India launch confirmed: Everything you need to know

'Teetering On A Dictatorship': Don Lemon Asks If Trump Is 'Declaring War On Americans'

Protests Spur Surge in Donations, Giving ActBlue Its Biggest Day of the Year

2020 Daily Trail Markers: Trump declares "we will dominate the streets"

‘Everybody Will Second-Guess’: Liberal Mayors Navigate Protesters and Police

D.C. Church 'Outraged' That Trump Used It As Photo-Op