Indian police on Friday arrested a man accused of causing the death of a pregnant elephant that died after biting a pineapple stuffed with firecrackers that exploded in its mouth. The 15-year-old elephant was unable to eat after the injury and died in a river in Pallakad in southern Kerala state on May 27, state forest officer Surendra Kumar said. 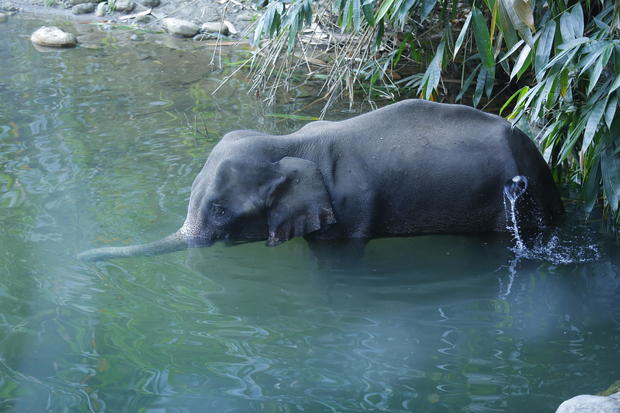 This May 27, 2020 photo shows an injured 15-year-old pregnant wild elephant standing in Velliyar River moments before it died in Palakkad district of Kerala state, India. Rajesh U Krishna / AP

Details of the suspect were not immediately available.

The state forest department announced the arrest and said it is investigating whether he was a poacher or a farmer who wanted to kill the elephant to prevent it from damaging crops.

"Bait bombs" made from food stuffed with explosives are common in India, particularly in southern states, and are used mostly to hunt wild boars for meat.

Appalled to hear about what happened in Kerala. Let's treat our animals with love and bring an end to these cowardly acts. pic.twitter.com/3oIVZASpag

Maneka Gandhi, a former minister from the governing Bharatiya Janata Party, described the death as shocking and demanded a severe punishment for those responsible.

A shrinking habitat and a rise in the number of wild elephants in the past 15 years have led to hungry elephants entering villages, where they sometimes damage crops and attack residents.

Pique on La Liga: Barca do not like to fall behind, but we have made every effort to change the situation
Pep Pro 0:1 with Southampton: city liked the Game, but it's not enough to win
Mandzukic is Interesting to Fenerbahce and Galatasaray. It is also claimed by Loco and Milan
Messi wants to finish his career at Barca. Bartomeu believes that Leo will not leave in a year
Gasperini about Atalanta: we Want to reach the Champions League and break the club's record for points in Serie A
Hames can leave Real Madrid for the Premier League for 25 million euros. A year ago, Atletico and Napoli offered 45-50 million euros for him. Real Madrid Midfielder Hames Rodriguez is likely to change clubs at the end of the season
Gattuso on Napoli: We must develop a winning mentality
Source https://www.cbsnews.com/news/elephant-killed-explosive-pineapple-india-man-arrested/

US diplomat in Hong Kong says security law use a ‘tragedy’