Low flying military helicopters were seen at the rooftop level above protesters who took to the streets in Washington D.C.'s Chinatown district on Monday night, according to multiple reports. 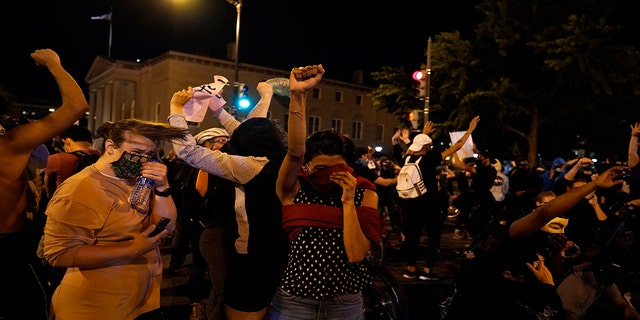 Demonstrators react as a helicopter circles low as people gather to protest the death of George Floyd, Monday, June 1, 2020, near the White House in Washington. Floyd died after being restrained by Minneapolis police officers. (AP Photo/Evan Vucci)

The protesters were captured in multiple videos posted to Twitter looking up at the maneuver known as show of force. It's normally conducted by low-flying jets in combat zones to frighten the enemy, according to the New York Times.

The crowds at one point dispersed into the surrounding blocks before one of the helicopters returned for another pass.

D.C. is a jurisdiction that can deploy the U.S. military without needing approval from a governor, the paper reported. Tensions have risen in the nation's capital in recent days following the death of George Floyd in police custody on May 25.

Earlier on Monday, law enforcement deployed tear gas to disperse peaceful protesters in Lafayette Square before President Trump walked through the area to visit St. John's Church, which had caught on fire during last night's demonstrations.

The reported utilization of low flying helicopters comes as Trump gave a statement in the Rose Garden that he is taking "immediate action” to mobilize “all available federal resources” to stop riots and looting across the country. He also threatened to deploy the military if states don’t send in the National Guard to the protests.

A military police unit was also deployed in the capital and was estimated to number between 200 to 500 troops from Fort Bragg, N.C, according to the New York Times.

MLS is back: almost 9 minutes of protest against racism and a giant virtual adidas logo in the center of the field
Solskjaer on MATIC: I'm Glad he stayed. We need experience in a team with children who run around
Germany manager Bierhoff: Havertz is a player for Real Madrid
Buffon's agent: Gianluigi should become a coach. He can lead Juve
Barcelona won the court against Santos in the Neymar case. The Brazilians demanded more than 61 million euros
Jamon, cheese, wine, tortilla and the best view of the stadium. The only La Liga club playing in front of the fans
Vinicius test for coronavirus, showed deviation from the norm. Real expects new results by the evening
Source https://www.foxnews.com/us/low-flying-black-hawk-helicopter-descends-washington-d-c