When the first trailer for Lovecraft Country, Jordan Peele and Misha Green’s upcoming HBO series, dropped in May, it teemed with supernatural scares. It also strongly hinted at the themes of black identity and racism that won a cult following and critical acclaim for the 2016 horror novel on which the show is based.

But if the first trailer was high on monsters and implied racial allegory, the newest teaser all but strips away the incorporeal monsters in favor of focusing on a much more familiar source of fear: police brutality. As our hero, a young black man named Atticus (Jonathan Majors), searches for his father (Michael K. Williams) through the eerie Lovecraftian forests of 1950s New England, he’s pursued by racist cops who are determined to terrorize him — and, perhaps, much worse.

We get a closer look at Atticus’s cross-country journey to find his father and the giant mansion looming at the heart of his search. The teaser also shows him being forced into terrifying confrontations with cops at every leg of the trip, in what almost feels like an inverse of Green Book. 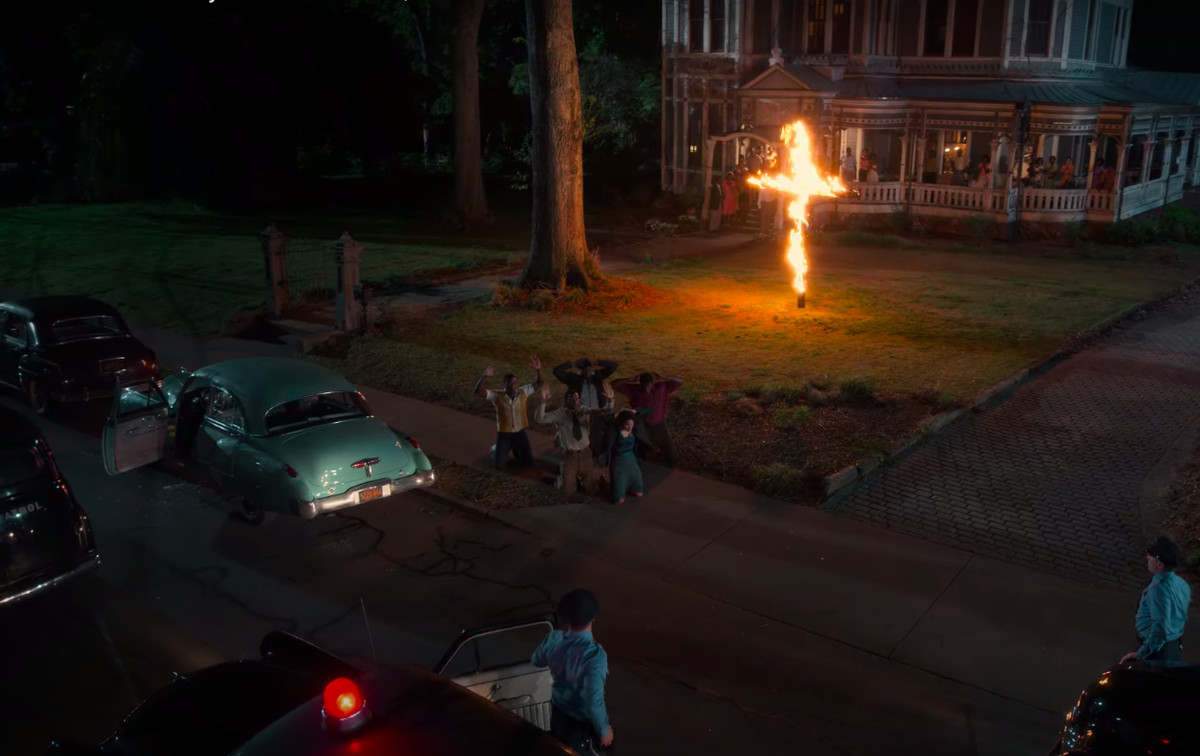 Peele and Green, the series’ co-creators and showrunners, both like to play with horror as an allegory for racism and other social issues. But in the wake of nationwide protests over the killing of George Floyd, this teaser’s focus on the literal terror of racism couldn’t be more appropriate or timely — or, frankly, unsettling.

In particular, the trailer highlights one of the scariest moments in the book, which involves a sunset town — a town where black citizens living in Jim Crow America were in implicit danger after the sun went down. When Atticus gets stopped by a local police officer in one such town, the officer gives him just minutes to drive across the county to the border, pursuing him with absolute violent intent the entire way.

As a work of horror fiction, Lovecraft Country is overtly about reclaiming the legendary 20th-century writer H.P. Lovecraft, an extreme white supremacist and vile racist whose beloved Weird fiction often contained appallingly overt metaphors for his fears of other races and desegregation. In Lovecraftian horror, the monsters are always otherworldly, but they’re monstrous because they represent and reflect human diversity — essentially what Lovecraft sees as the taint of non-white blood slowly corrupting America.

In the book Lovecraft Country, author Matt Ruff places genre-savvy black characters at the center of a Lovecraftian narrative. The eerie Lovecraftian horror arises not from any fear of their blackness but from the systemic racism they’re perpetually confronted with as black Americans. So it’s significant that almost nothing actually supernatural happens in this latest trailer for the series. Almost nothing supernatural needs to happen for the horror to be pervasive and real.

And when the monsters do make brief appearances, they’re almost more alarming as a result. Their sheer superfluousness highlights just how scary Lovecraft Country already is: At one point in the trailer, a group of black travelers is hemmed in by police on all sides, forced to kneel with their hands up. It’s uncomfortably raw.

The foregrounding of Lovecraft Country’s racist police here is confrontational. It’s perhaps also a reflection of how unexpectedly necessary Lovecraft Country might feel when it premieres in August — as a depiction of a bygone era that suddenly looms closer than ever.

Ole Gunnar sulscher: Greenwood is much better than I was when I was 18-19
Talalaev lit up the Wings in Khimki: the players called the coach Klopp, and themselves-Liverpool from the FNL
Rummenigge on buying out Perisic from Inter: Bayern haven't decided yet
Director of Tambov that Melkadze will not play with Spartak: we do not have a free 3-5 million rubles
Juventus wanted to swap Ramsey for Ntombela. Tottenham refused
Klopp on players who have played less than 5 matches: They will receive a gold medal. If you are not from the Premier League, something from me
Messi may move to Manchester City (Fox Sports)
Source https://www.vox.com/2020/6/3/21279456/lovecraft-country-trailer-hbo-racism-police-brutality-horror