Louisville, Kentucky Mayor Greg Fischer on Thursday pleaded with those protesting the Breonna Taylor indictment decision to stay peaceful, as he provided an update on two cops shot during the city’s unrest.

“Violence will only be a source of pain, not a cure for pain,” said Fischer during a morning press briefing alongside interim Police Chief Robert Schroeder. “When any of us gives into the temptation to channel anger into violence, we slow our progress, we sacrifice the future for the moment.

The city erupted Wednesday after a grand jury declined to directly indict three current or former Louisville Metro Police Department cops in the March death of Breonna Taylor, an unarmed black EMT gunned down during a botched raid on her apartment in the dead of night.

Two of the cops were cleared of criminal culpability altogether, while the third, since-fired officer Brett Hankison, was charged with “wantonly” firing shots from his service weapon — not necessarily endangering Taylor, but people in a neighboring unit.

Kentucky Attorney General Daniel Cameron said Wednesday that the cops — who were executing a search warrant for drugs they never found — were justified in the shooting because they first came under fire from Taylor’s boyfriend, a licensed gun owner who has maintained that the trio didn’t identify themselves as law-enforcement.

In the unrest that sprang from the decision, some 127 people were arrested and 16 incidents of looting tallied, Schroeder said Thursday.

Around 8:30 p.m. Wednesday, two LMPD cops were shot amid the chaos, but escaped life-threatening injury. 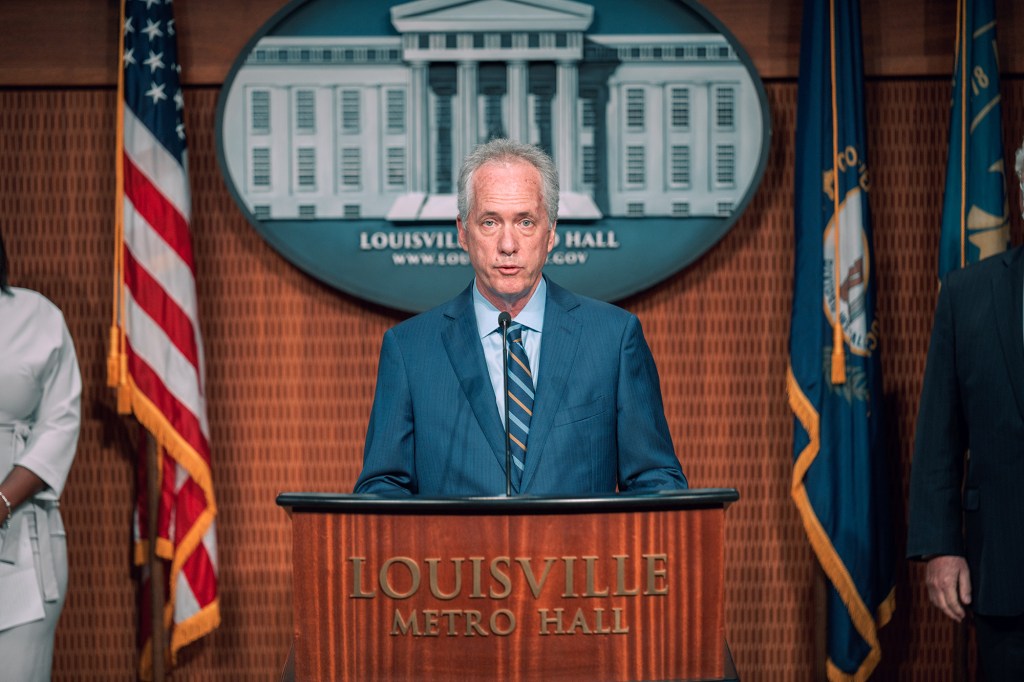 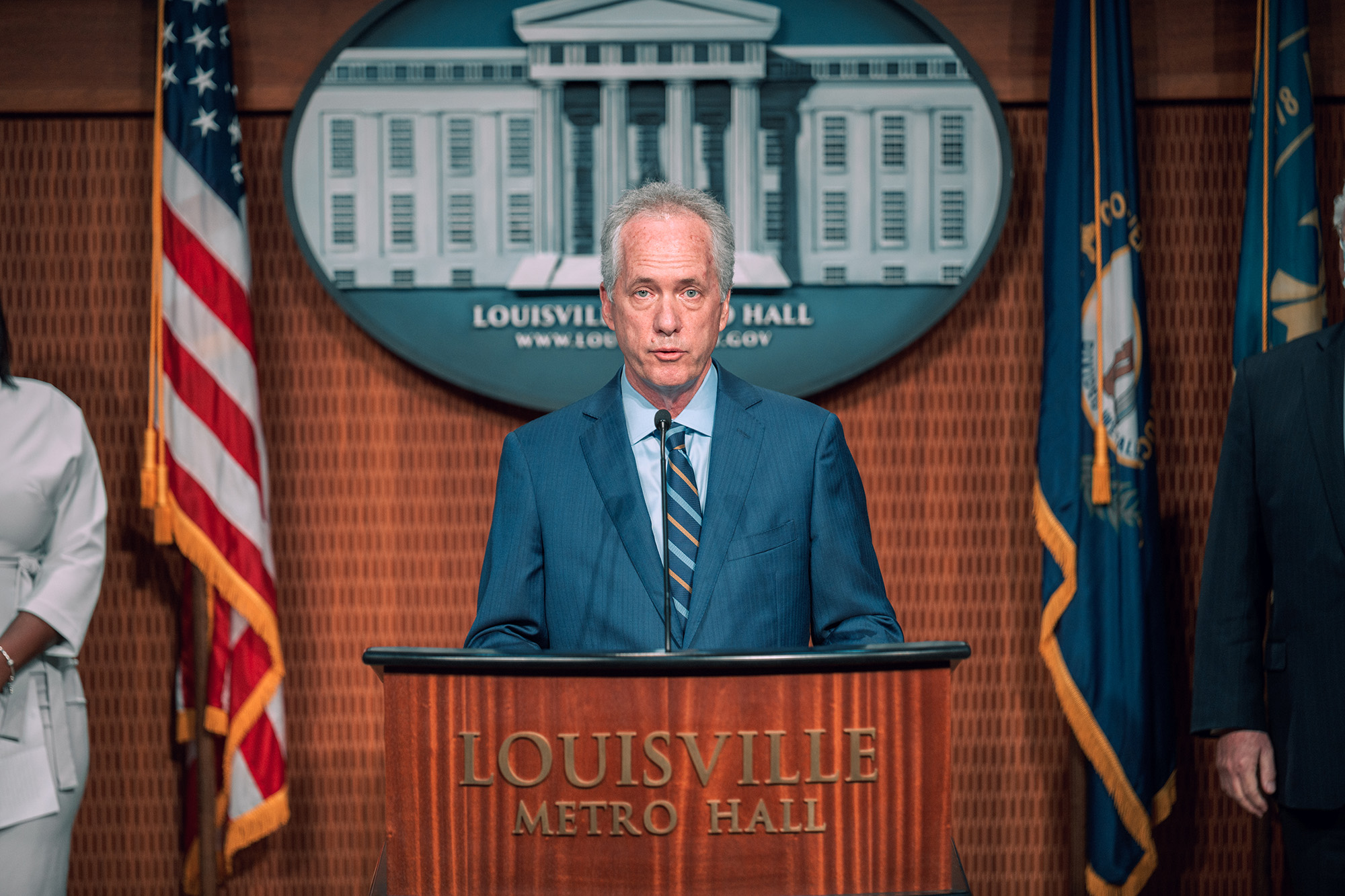 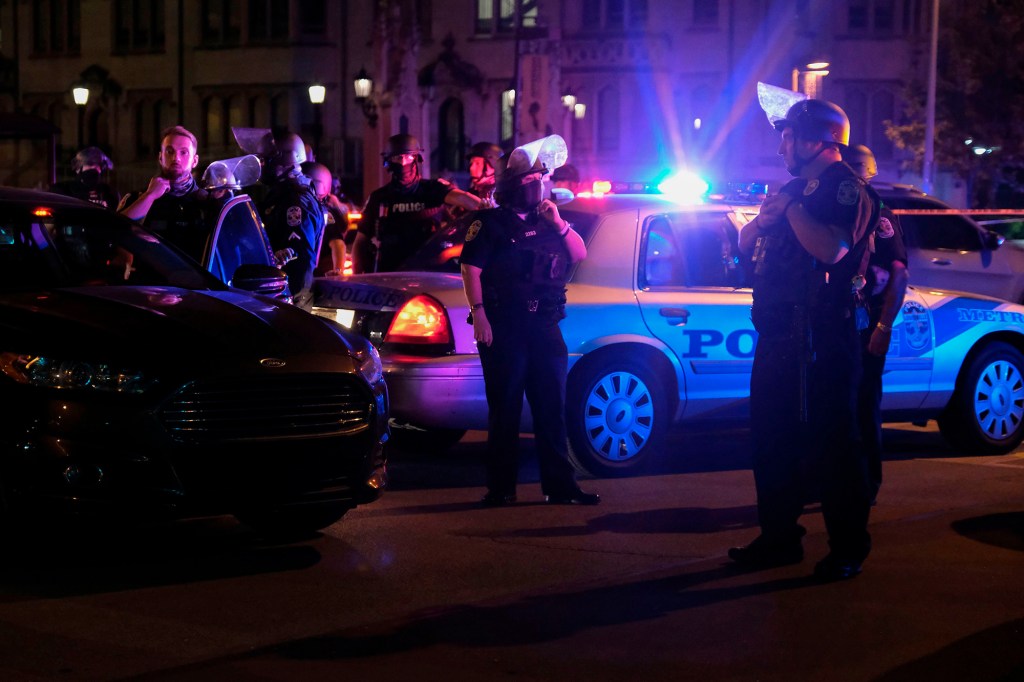 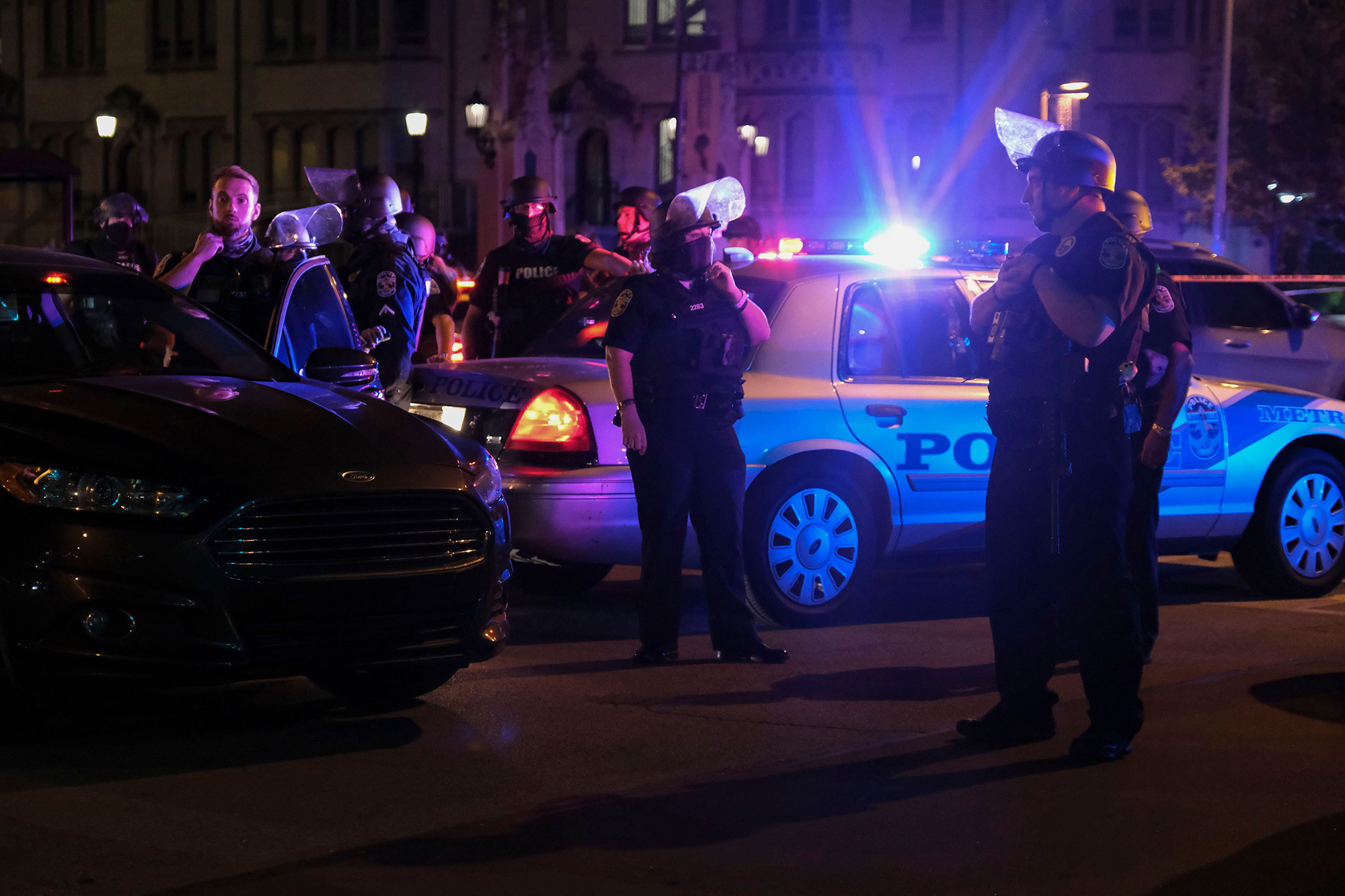 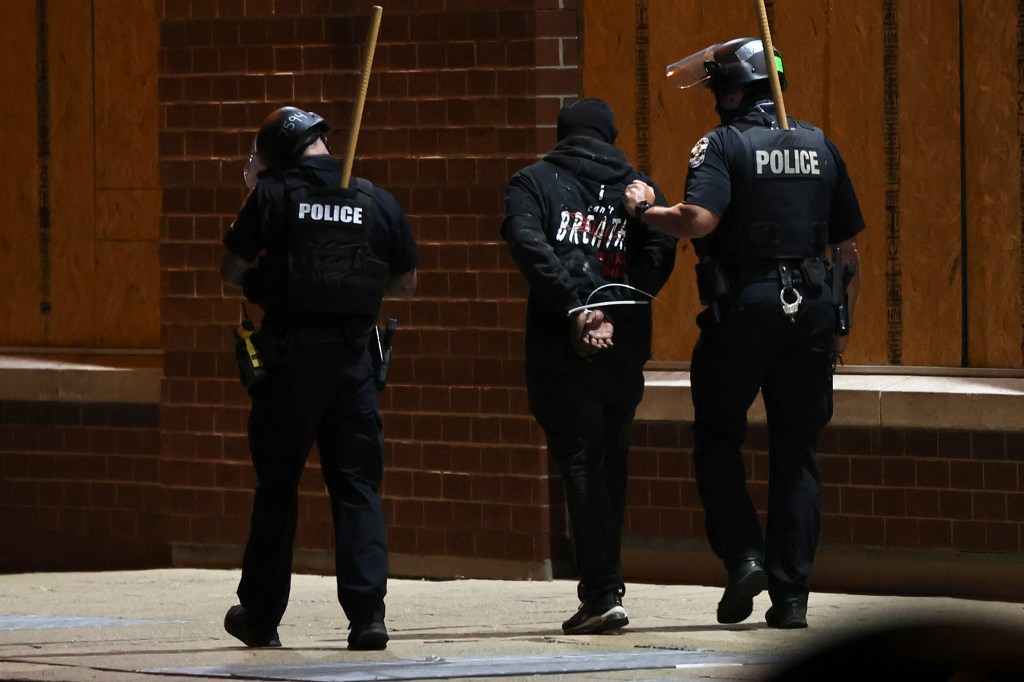 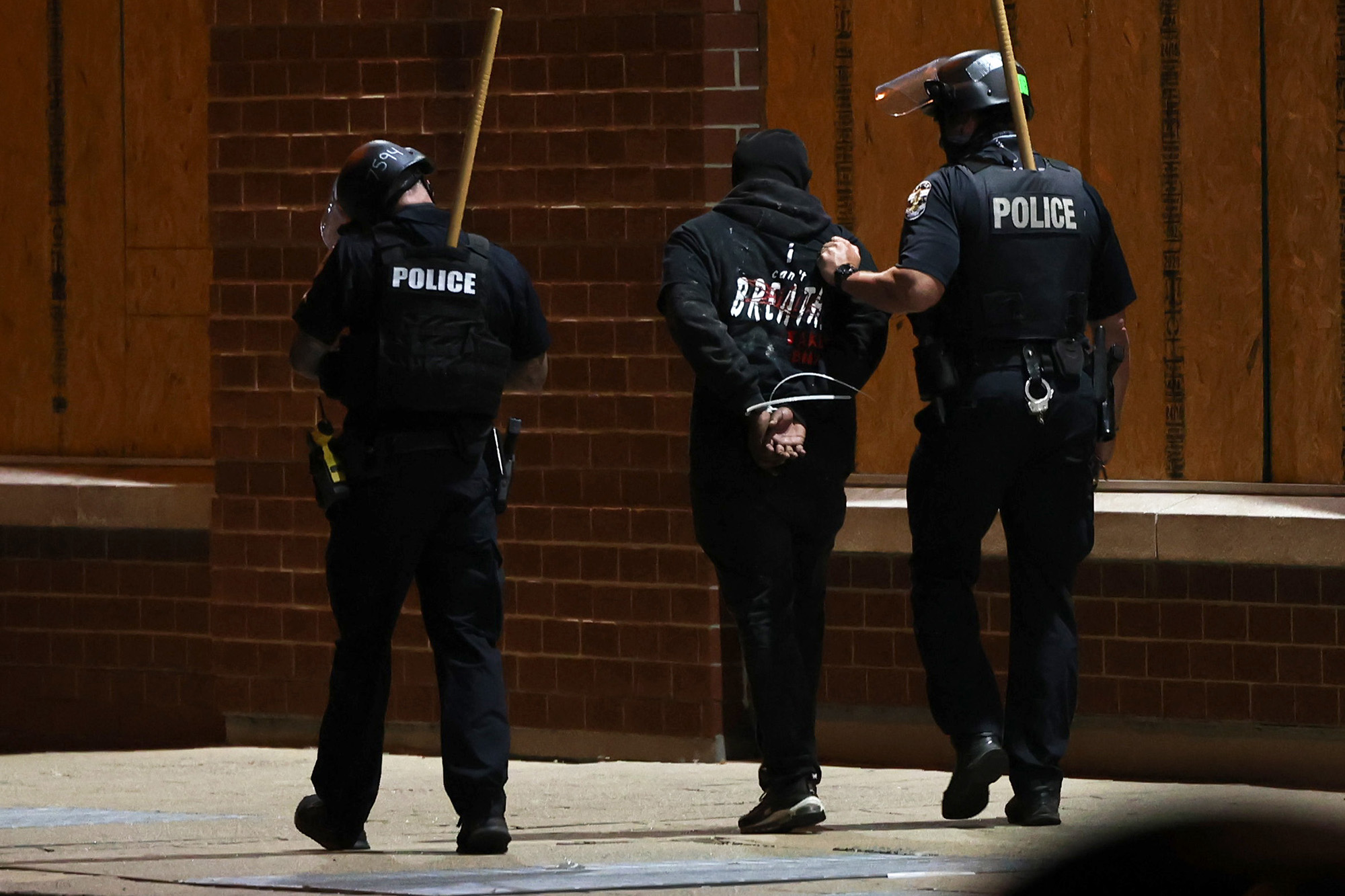 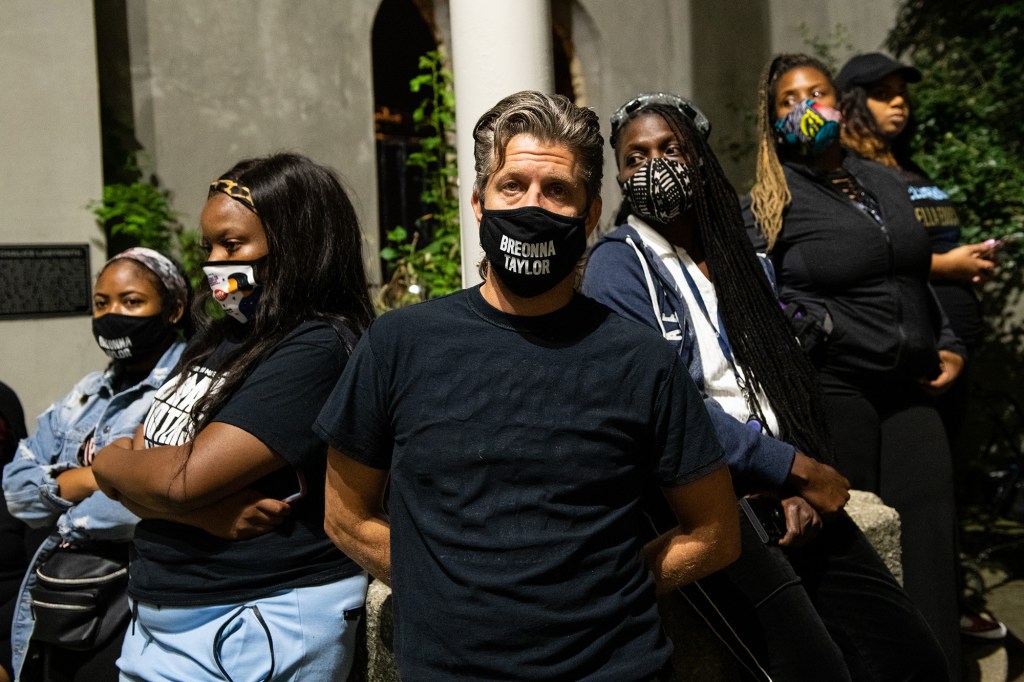 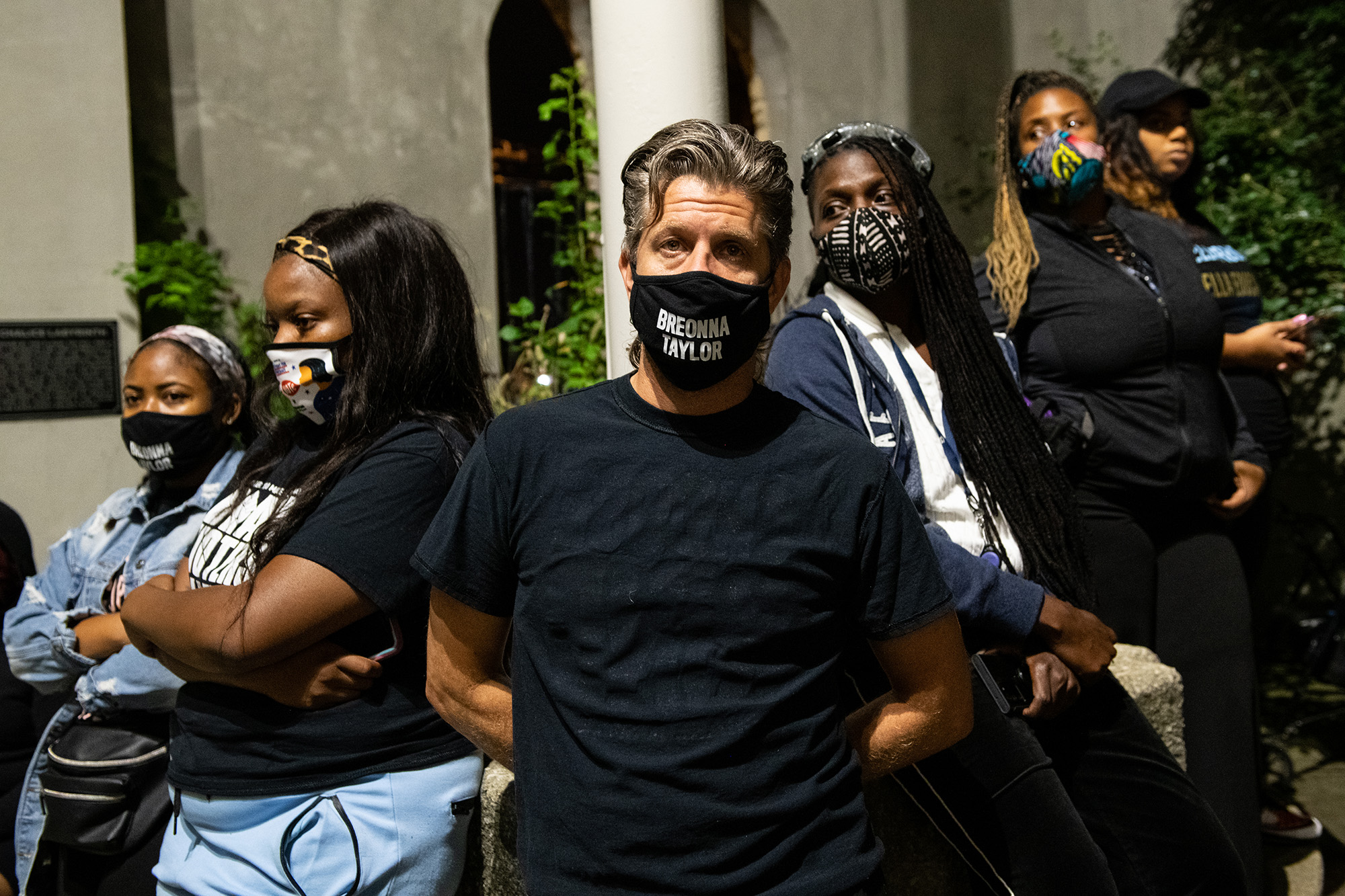 Demonstrators gather at a church after gun shots were fired at police officers. 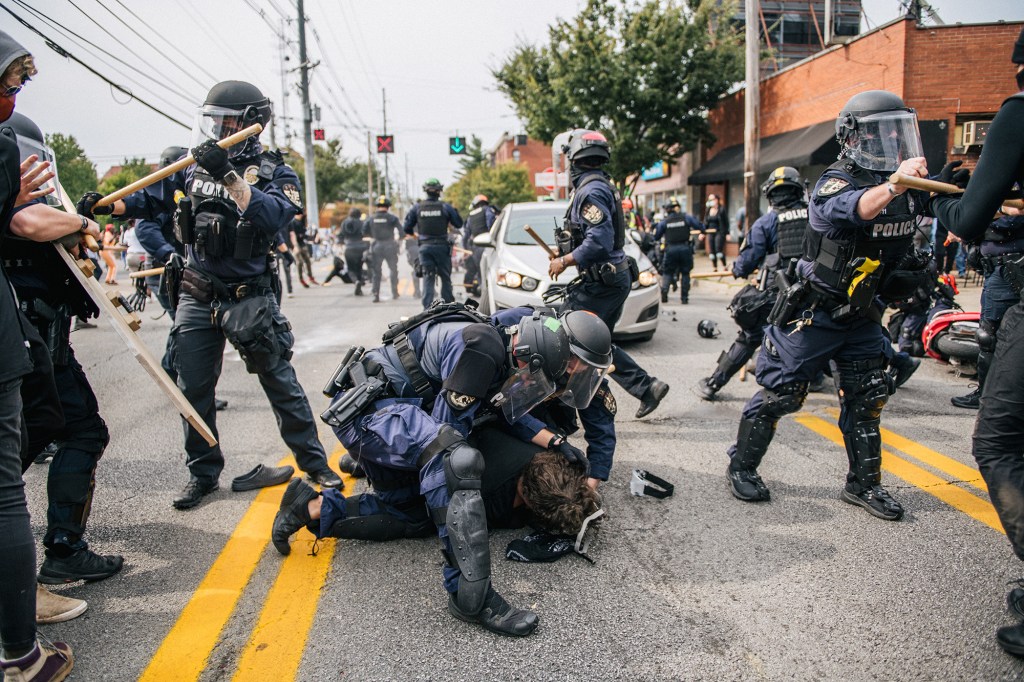 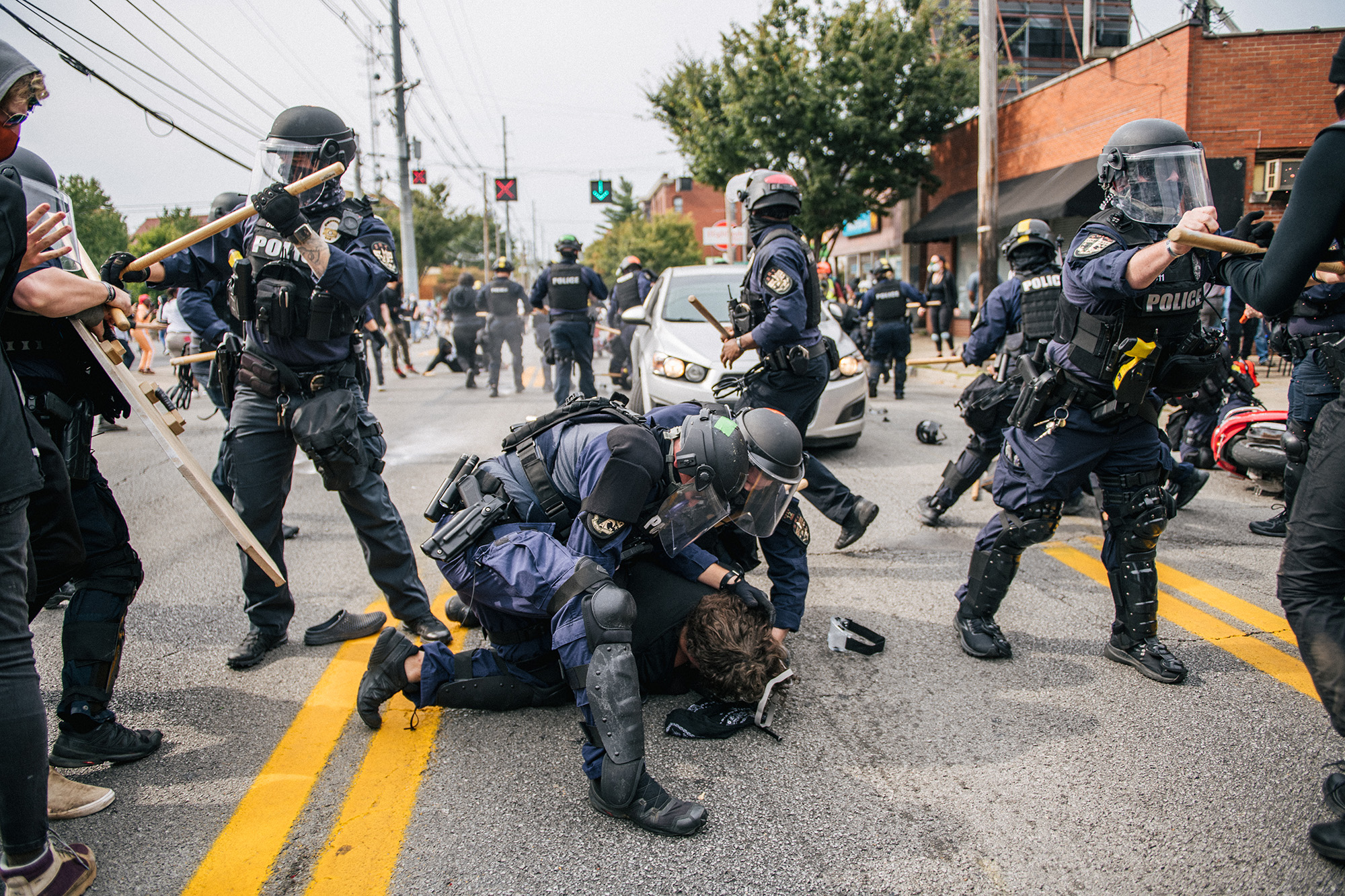 A protestor is detained following the grand jury verdict of Breonna Taylor. 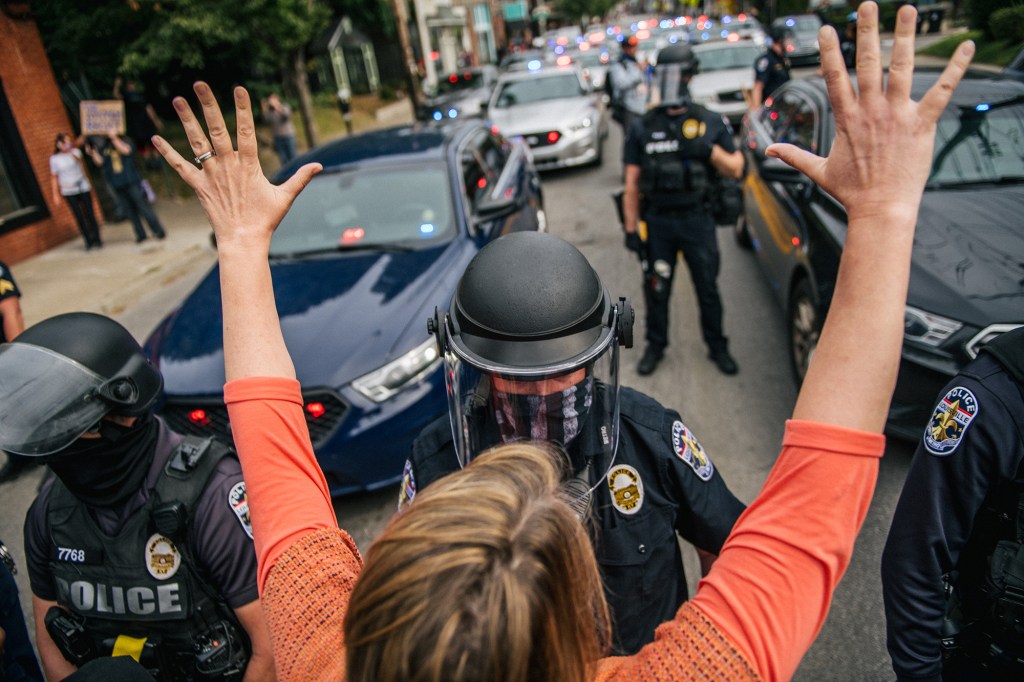 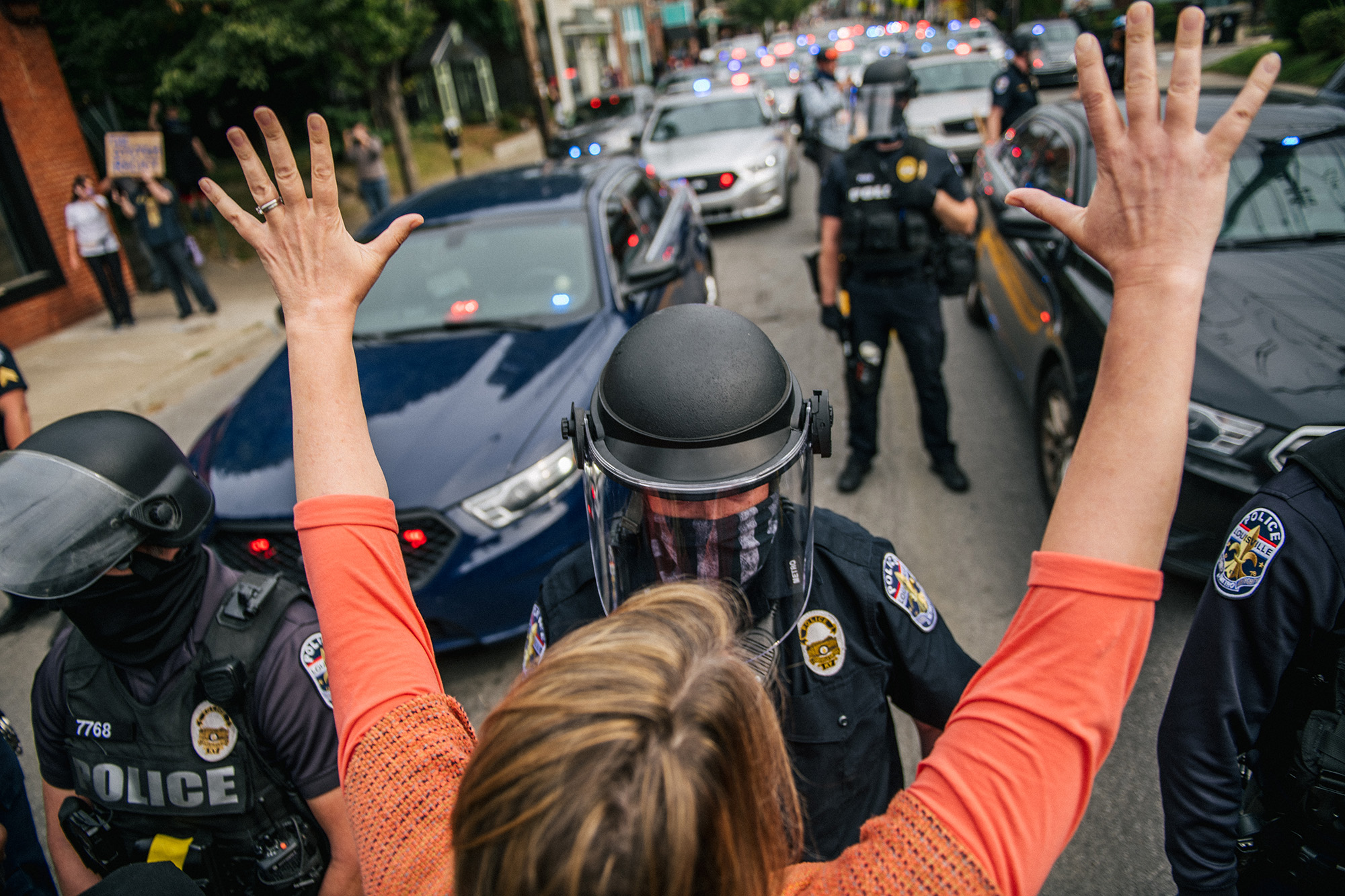 A protestor raises her hands in the air during a standoff with law enforcement. 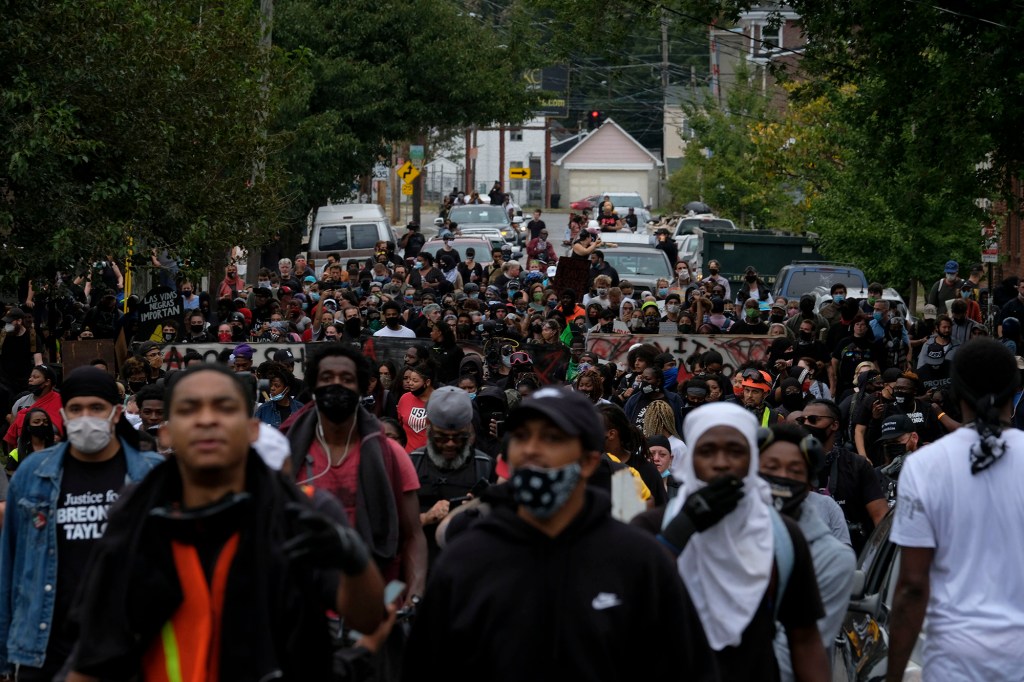 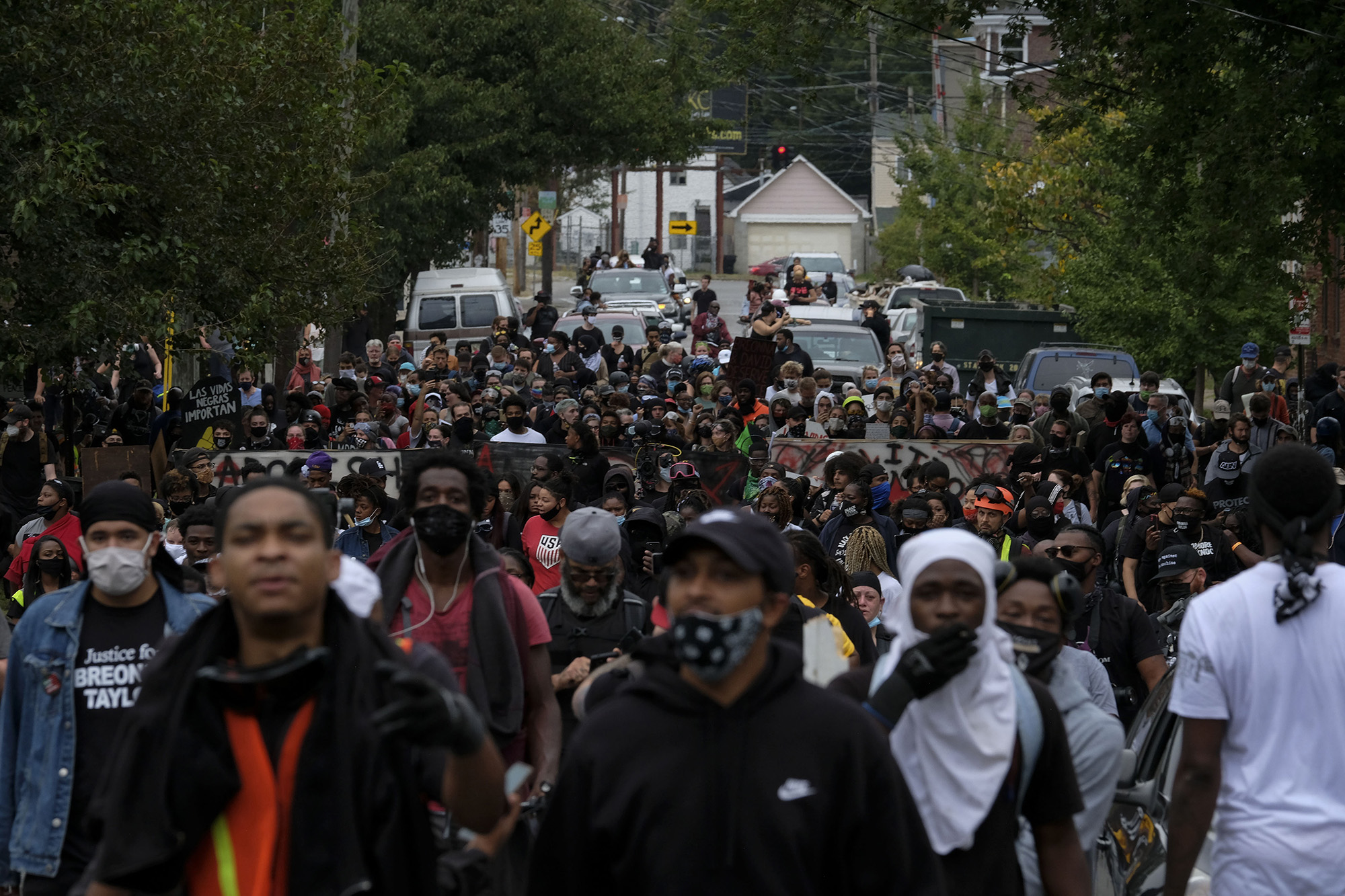 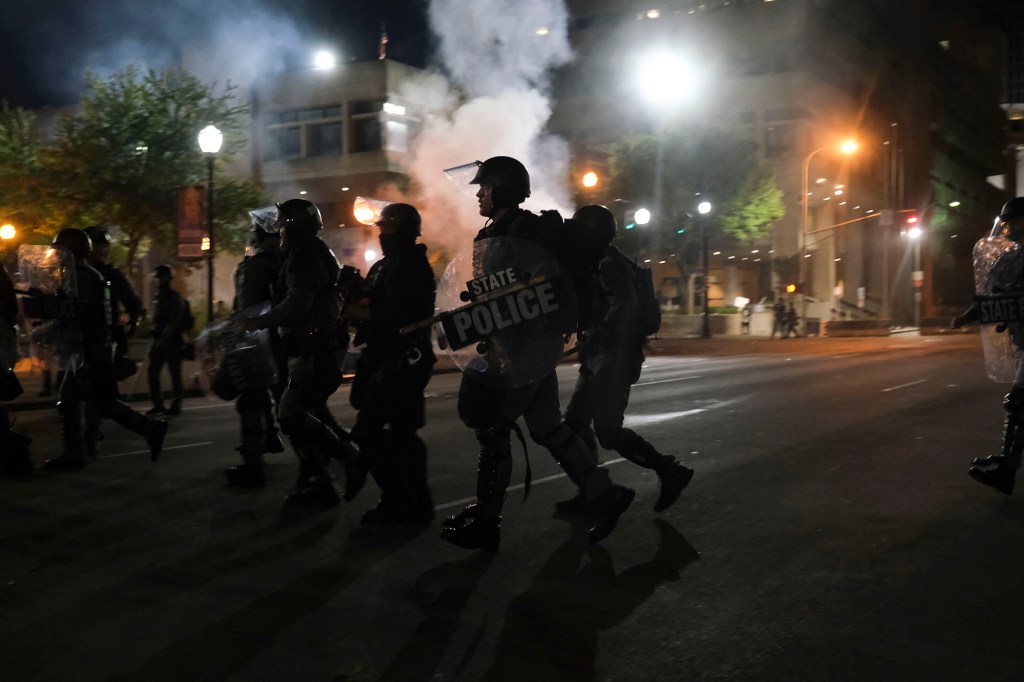 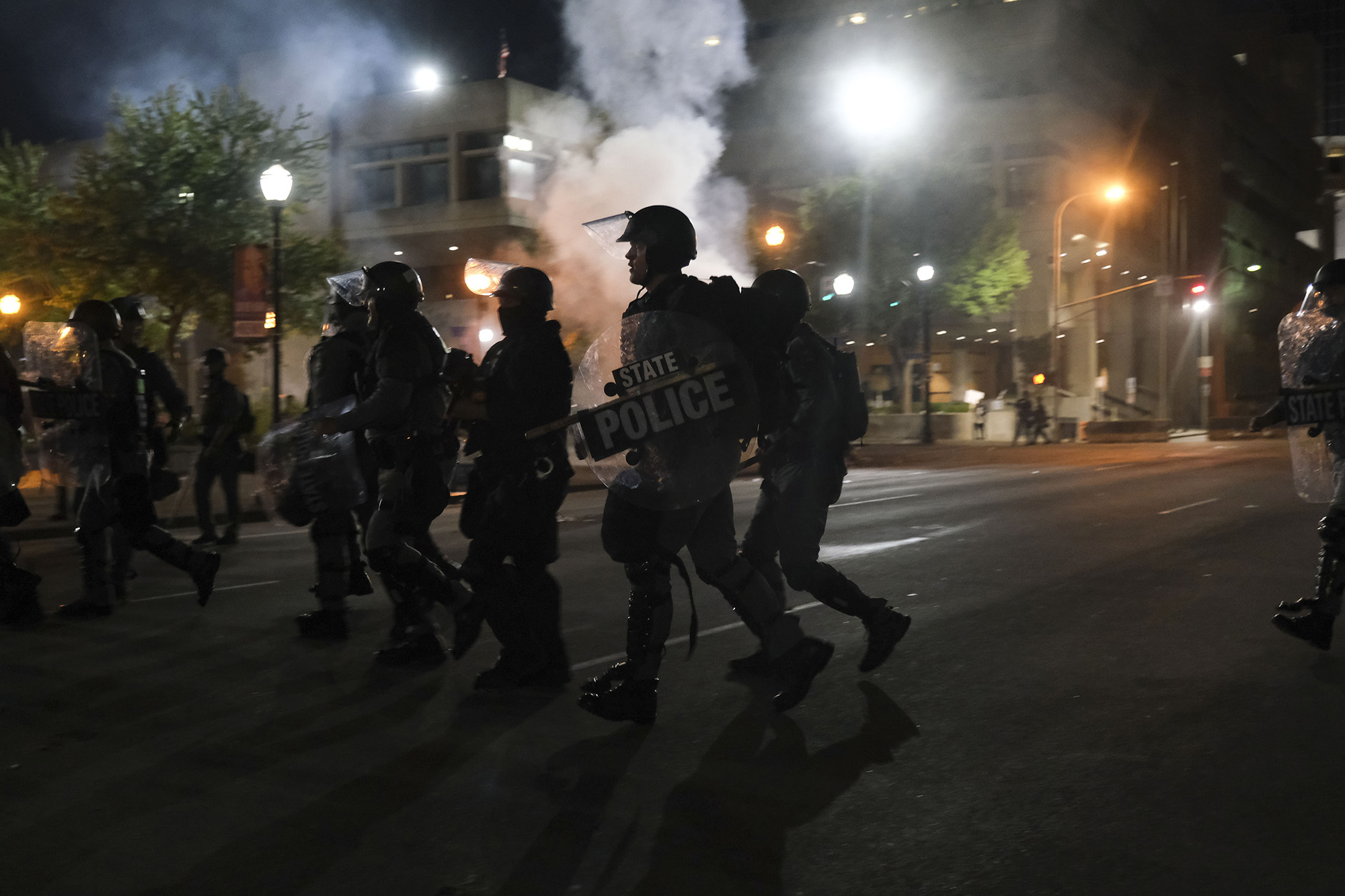 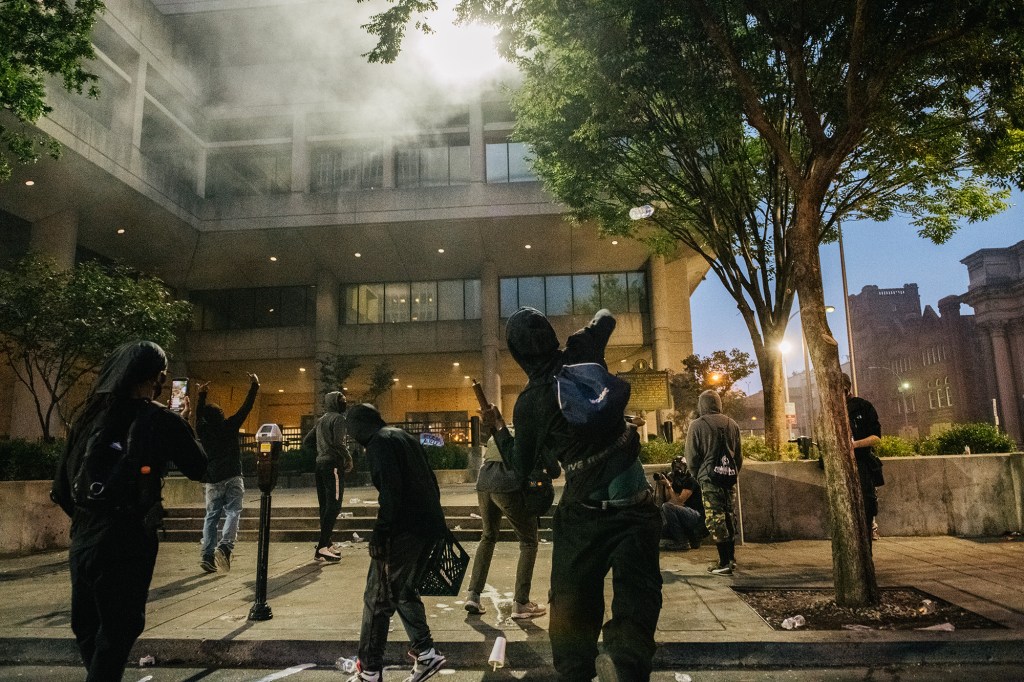 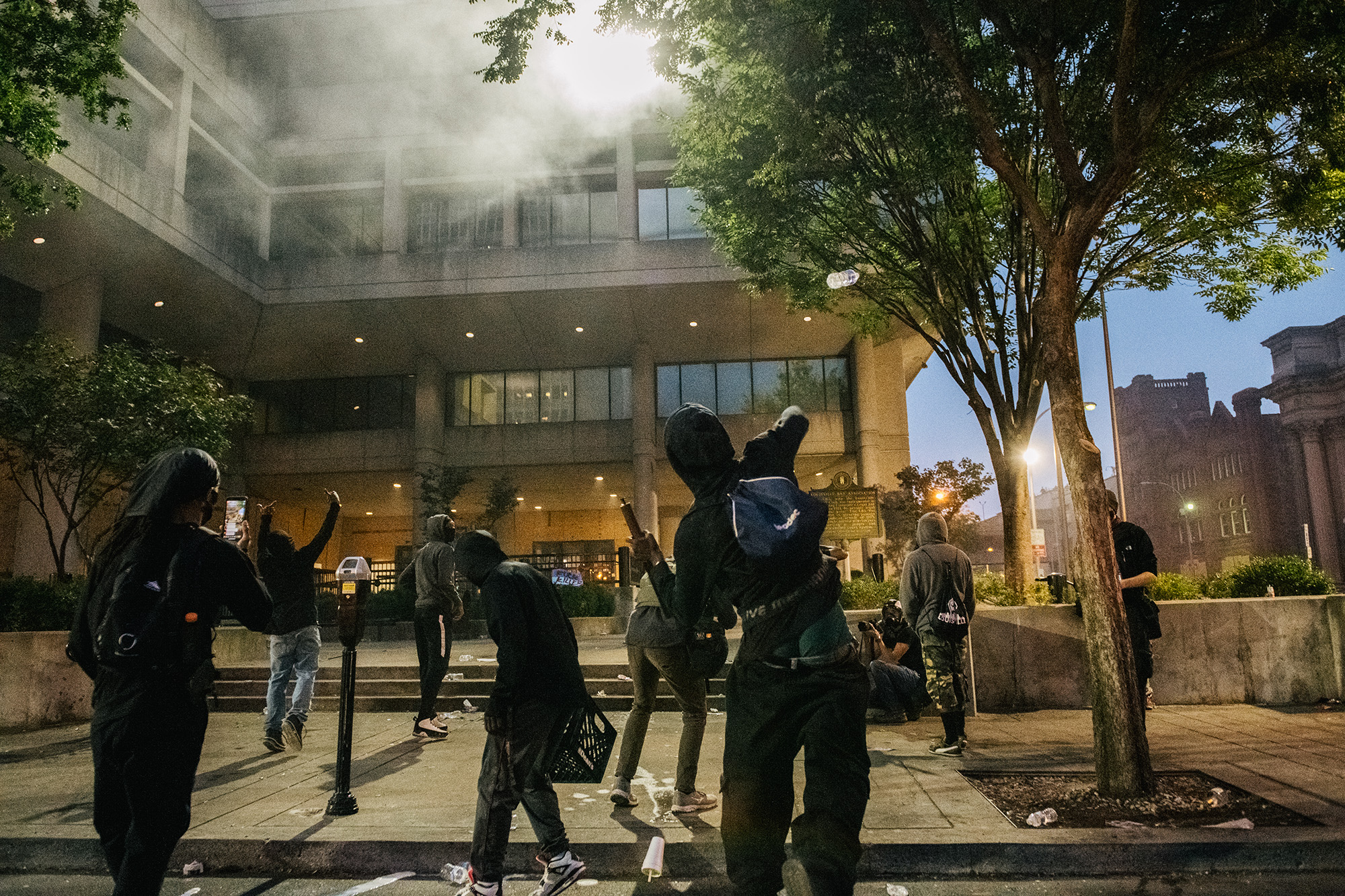 “Last night’s situation could have been so much worse for our officers, and for the people who were protesting when the gunfire rang out,” said Schroeder.

Maj. Aubrey Gregory, a Louisville cop since 1999 and the head of the department’s Special Operations Division “leading efforts on the ground [Wednesday] night,” was struck on the hip and has already been released from the hospital, Schroeder said.

Gregory is a married father of three, according to an online profile.

Officer Robinson Desroches, in his second year on the job, was struck in the abdomen below his bullet-resistant vest, but was said to be in stable condition after undergoing surgery.

Larynzo Johnson, 26, has been charged in the shootings with first-degree assault and first-degree wanton endangerment — the latter charge the same one leveled against Hankison. 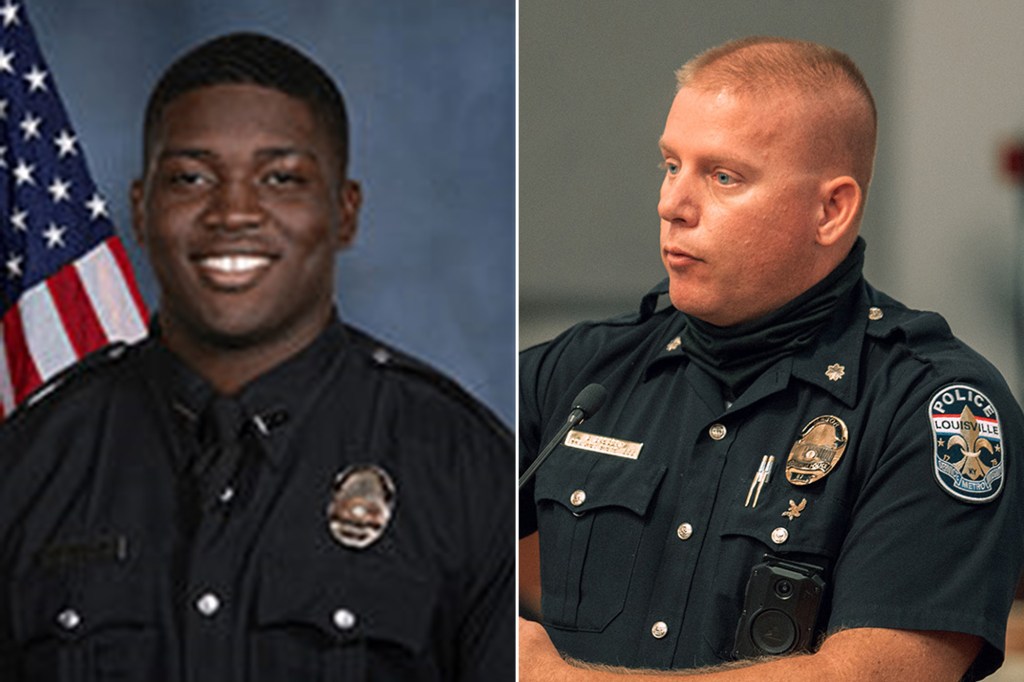 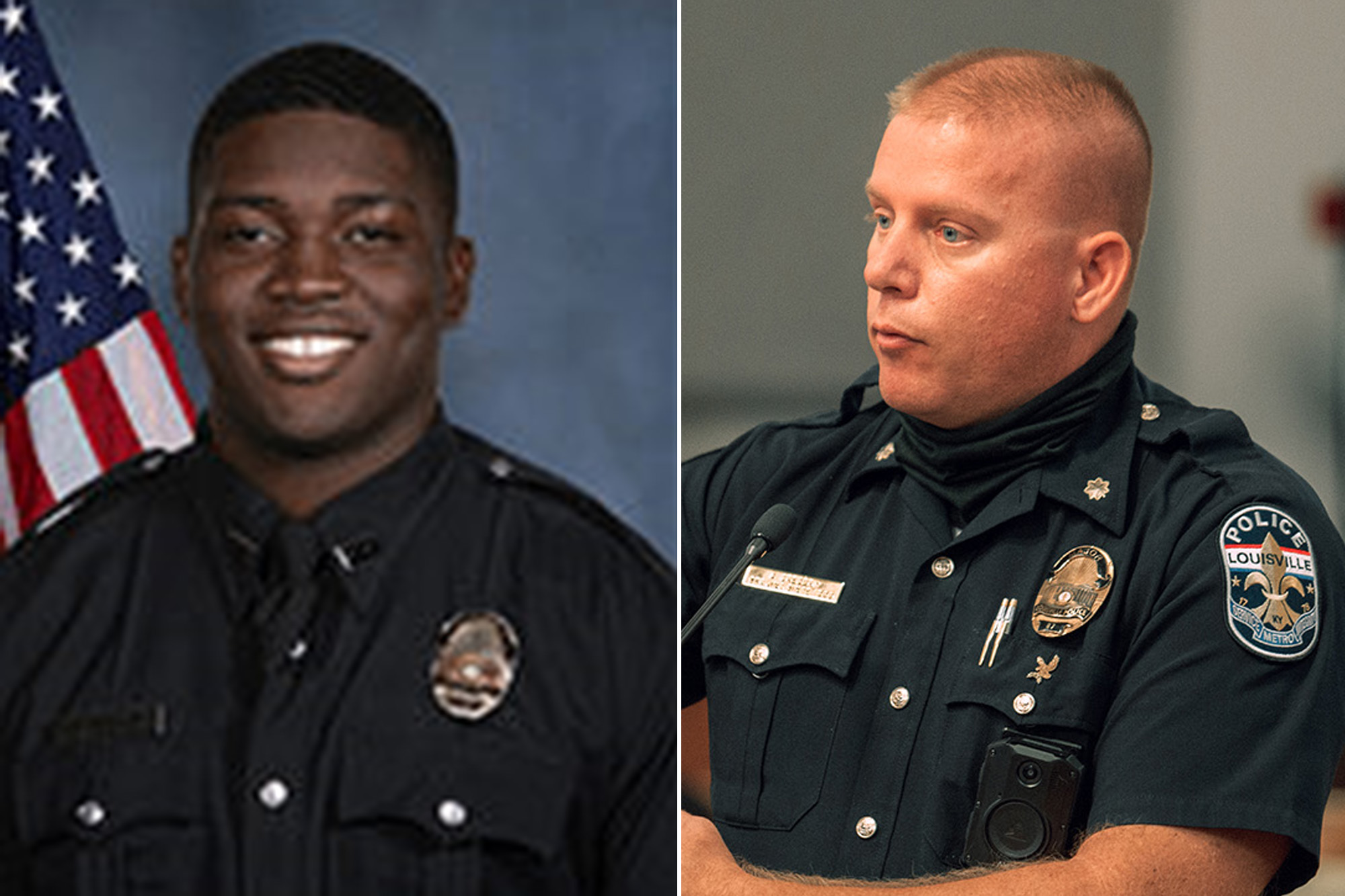 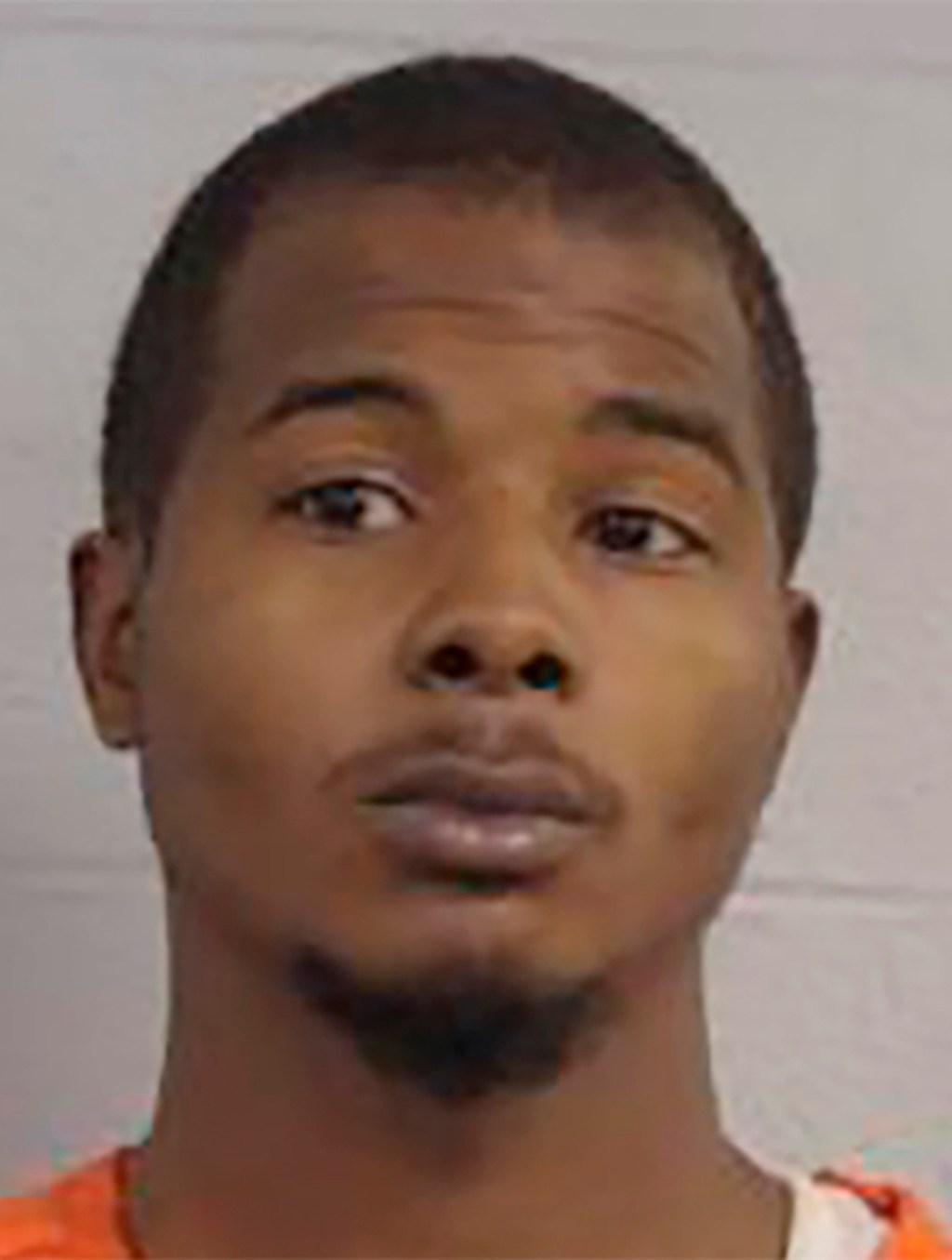 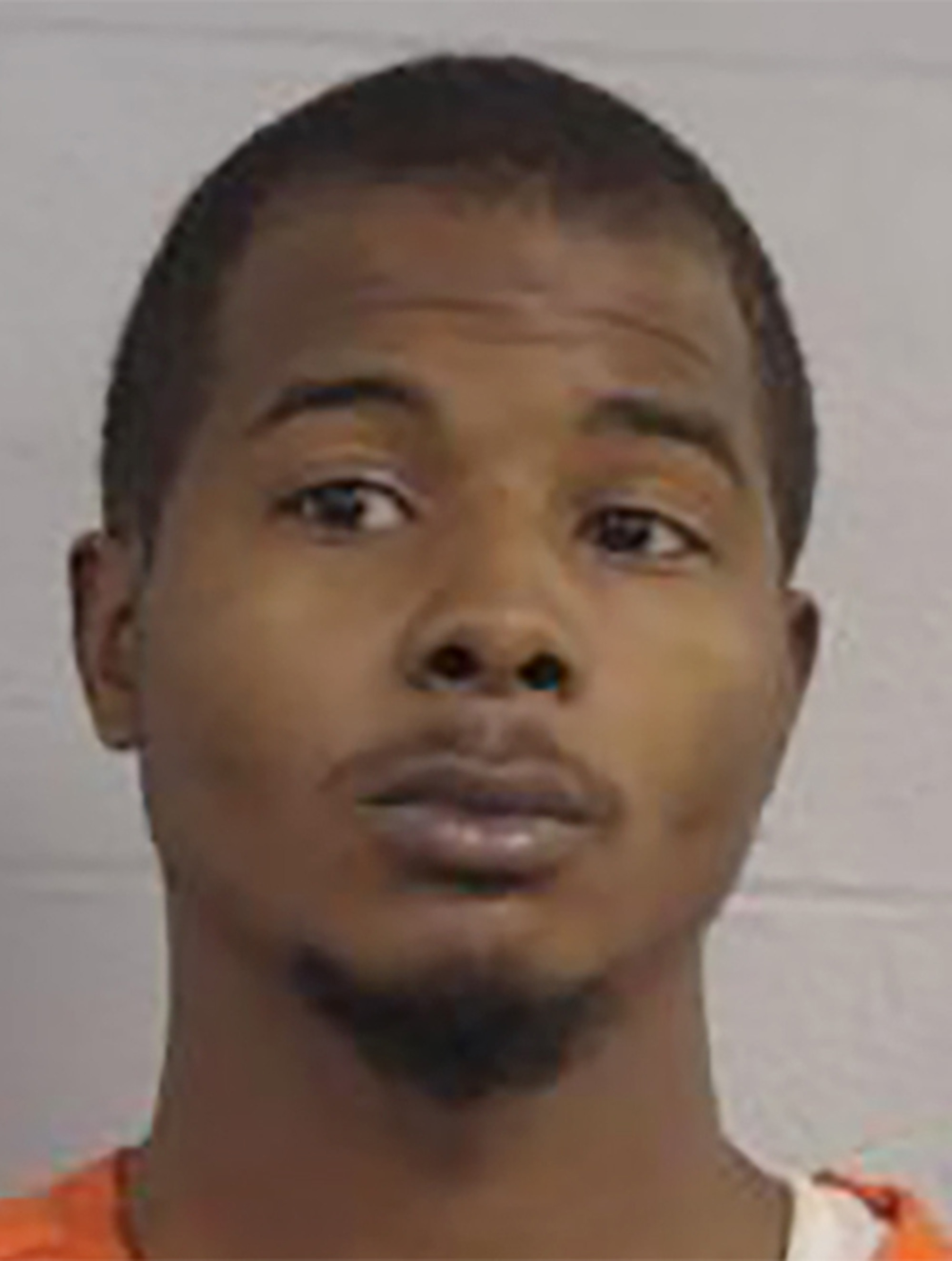 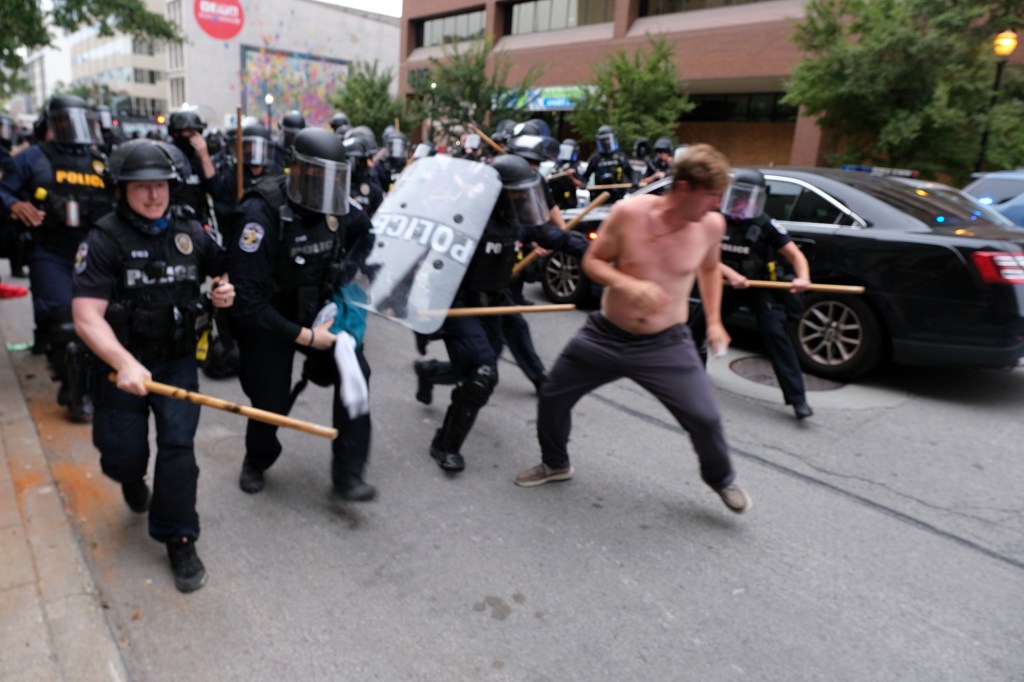 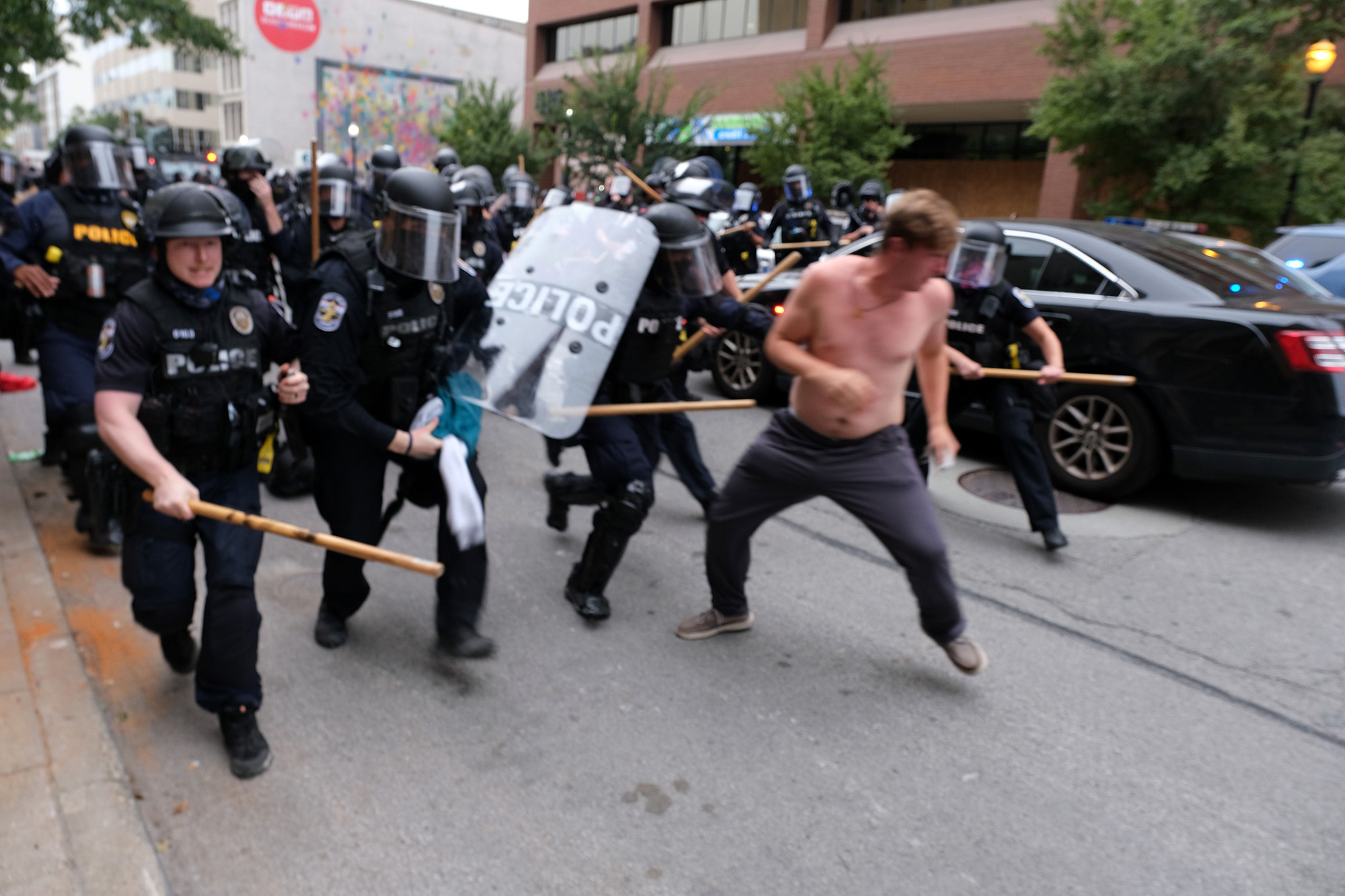 Protesters confront a row of police officers as they march in Louisville, Kentucky. 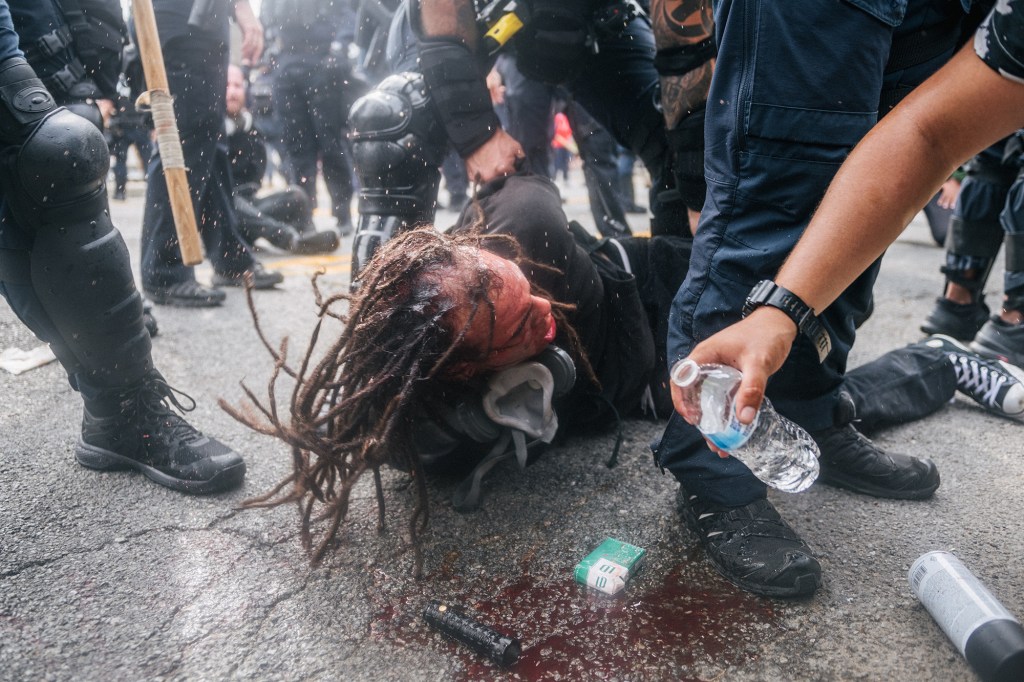 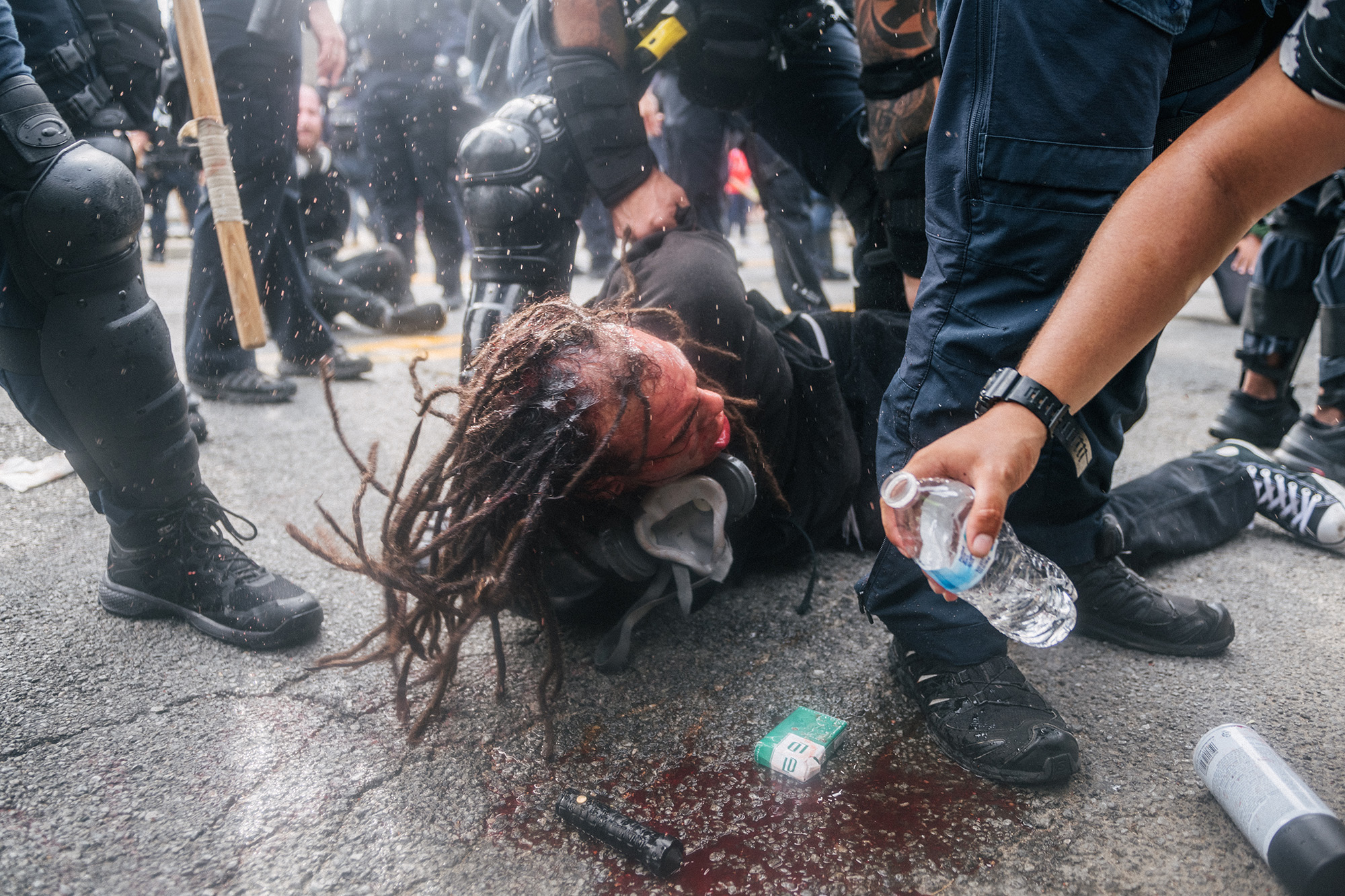 A demonstrator is detained during protests in Louisville. 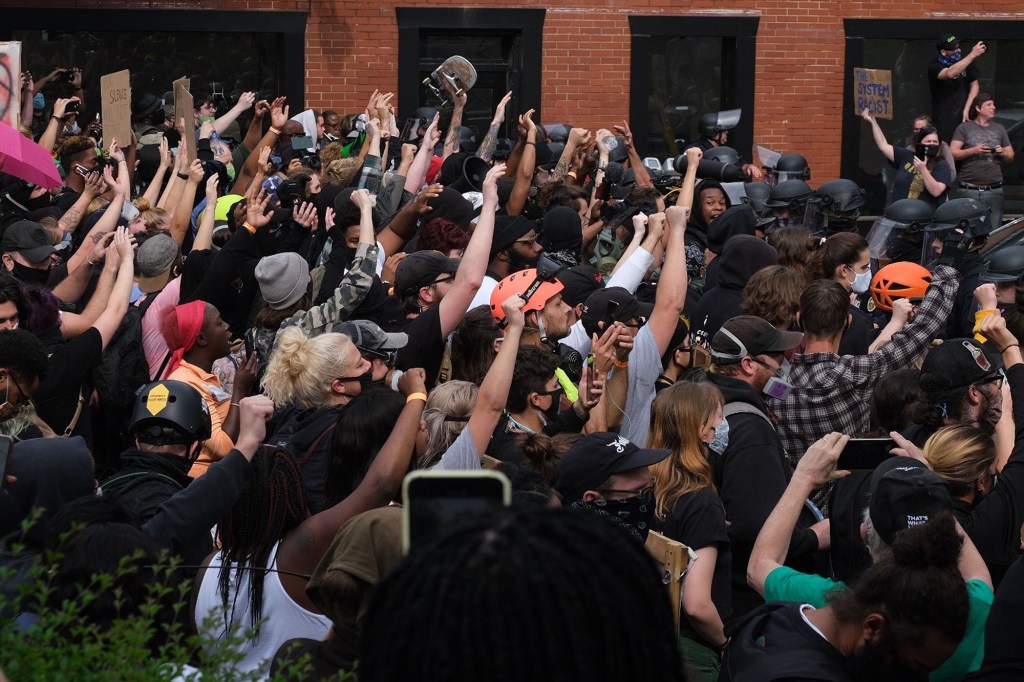 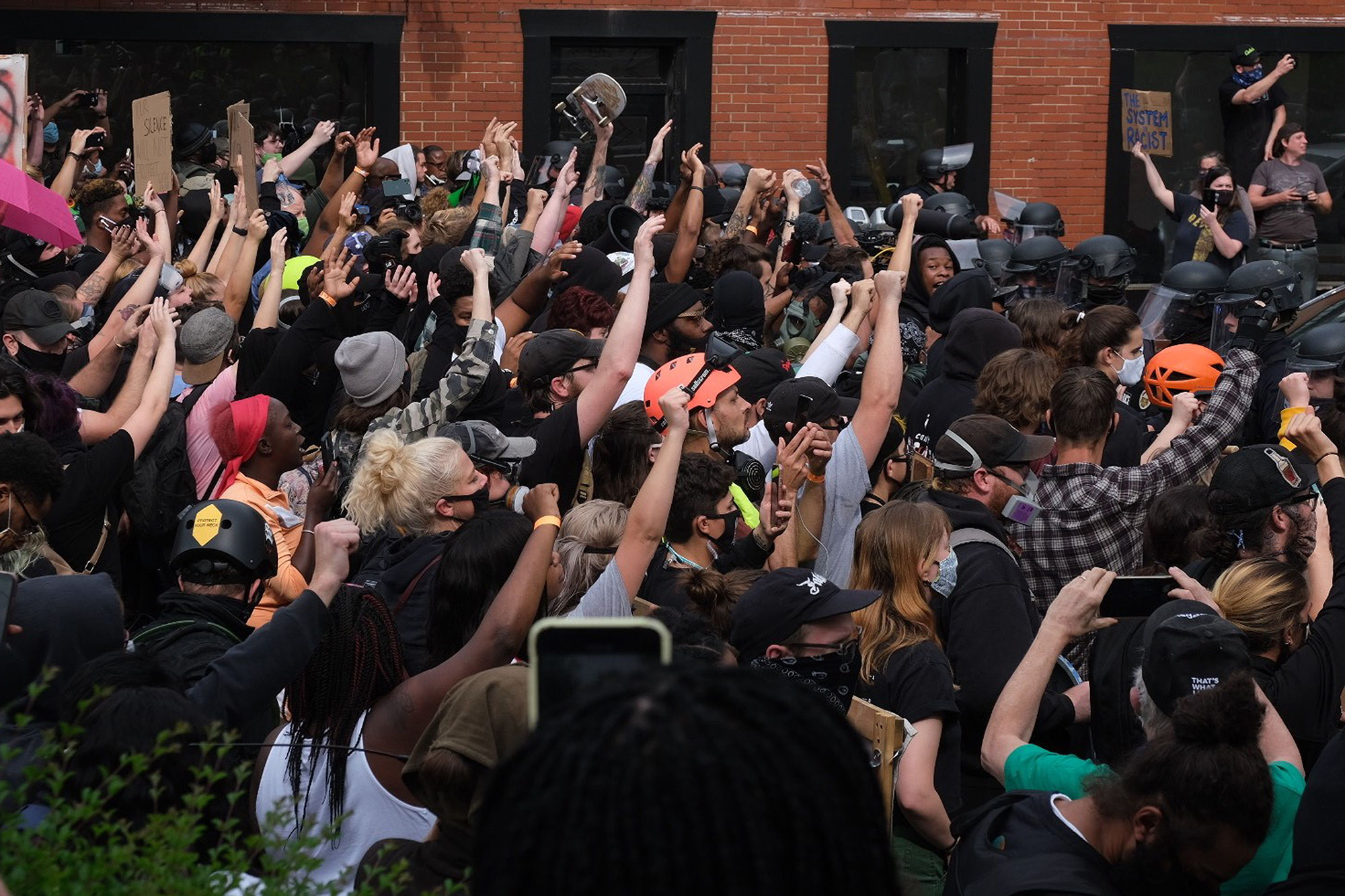 Schroeder declined Thursday to reveal any statements Johnson may have made, get into what motivated his alleged attack or confirm whether he was a protester.

Schroeder also noted that on Wednesday night one cop was struck by a protester’s baton, another suffered a knee injury while making an arrest and a third was exposed to blood and saliva by a spitting demonstrator.

A 9 p.m. curfew remains in effect in Louisville, with unrest expected to continue there, as in cities across the nation including New York, Portland and Seattle.

Fischer closed with another entreaty to protesters to make their points without turning to violence.

“This is an extremely important moment, not just for our city but for our country as well,” he said. “I urge everybody to focus on that endgame, where we can have equity, liberty, justice for all.

“That’s the goal that we should all be able to agree on.”

Ex-judge Halsey: I'm surprised Pickford didn't get a red card. He put van Dijk's health at risk
Ander Herrera: I didn't feel love from Manchester United. The management and I had different views
Pique is ready to take a pay cut at Barca
Eto'o accused France Football of disrespect: I spent 1-2 seasons on the right, and the center forward was 25 years old
Barcelona are concerned about the shape of the Target. The club believes that he did not work enough on vacation
Laporte was supported by van Dyck: Sorry, bro. No joy, even though we are rivals
Lautaro Martinez: Messi is the best in the world. He is always one step ahead of the rest
Source https://nypost.com/2020/09/24/louisville-mayor-calls-for-peace-amid-breonna-taylor-protests/

China's Covid success compared to Europe shows lockdowns are the first step, not a solution

Australia to join India, US, Japan in large naval exercises

Trump closes his campaign by insulting Fauci for telling the truth