The Trump administration will no longer ship personal protective equipment to allies overseas as the United States grapples with shortages of critical medical supplies amid the coronavirus pandemic.

A congressional source told CNN Wednesday that they were informed late last Friday night that the coronavirus task force -- led by Vice President Mike Pence -- was stopping overseas shipments of the medical equipment and instead asking that the supplies be distributed within the US.

Asked about reports of the freeze on Wednesday, President Donald Trump said there was “no truth whatsoever” to them. However, minutes later, he noted that "whatever we have, whatever we've committed to, we commit," but added "we also need a lot for ourselves."

"Obviously we're not going to be shipping too much," he said during a White House briefing.

Politico was the first to report on the freeze. CNN has reached out to the State Department and US Agency for International Development (USAID) for comment. 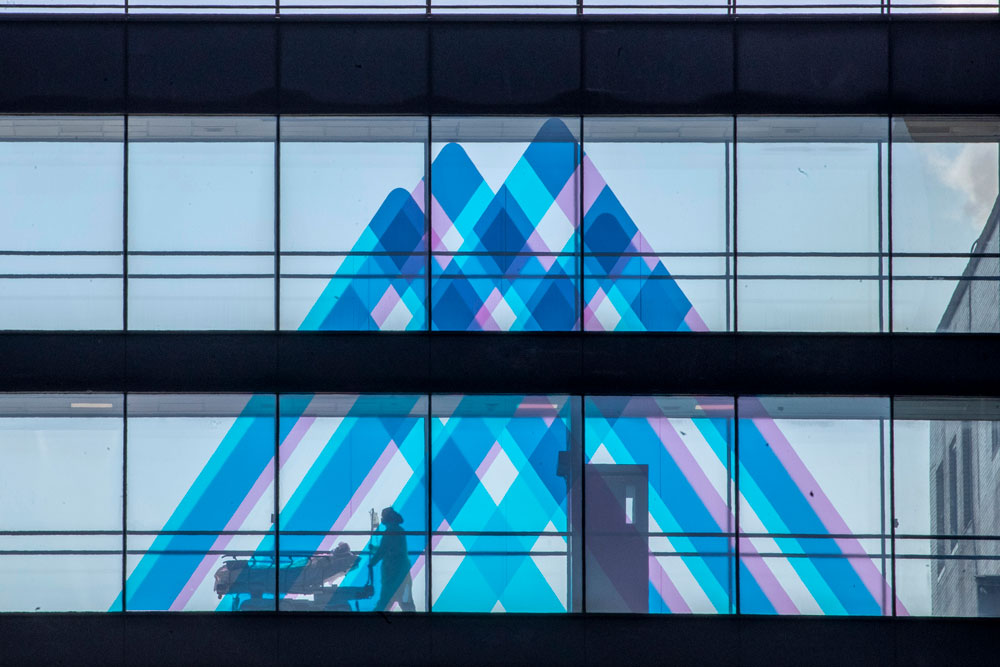 Edging toward 1 million cases: The novel coronavirus has infected more than 932,000 people and killed over 46,000 worldwide, according to Johns Hopkins University, which is tracking World Health Organization figures and additional sources.

United States worst hit: The US has recorded more than 211,700 cases, according to a CNN count. At least 4,762 people have died nationwide -- over 1,300 in New York City alone. At least 928 new fatalities have been reported on Wednesday -- the highest single-day figures during the outbreak.

Dwindling supplies: President Trump said the US Strategic National Stockpile is nearly depleted as hospitals across the country are in need of millions more masks, protective gear and thousands of ventilators.

Aircraft carrier cases: Nearly 3,000 sailors from the USS Theodore Roosevelt will be evacuated from the aircraft carrier and quarantined in hotels in Guam after a desperate plea for help as the number of coronavirus cases aboard the ship approaches 100.

The situation in Europe: Spain has now recorded more than 104,000 cases, while the UK reported its highest number of deaths in one day, with 563 new fatalities. In Italy, a slowdown in the rate of coronavirus patients is a "confirmation of a hope," officials say.

Lockdowns extended: Italy, Germany and Pakistan are among countries that are extending their lockdowns to stop the spread of coronavirus.

As the number of novel coronavirus cases in California approaches 10,000, doctors at a Los Angeles hospital say they are seeing an increase in patients showing Covid-19 symptoms, causing a reduction in capacity and the rationing of protective equipment for medical workers.

“We know every day that we are likely to come in contact with someone with the virus,” said Dr. Broderick Franklin, an emergency room physician in Los Angeles.

Franklin, who works at Centinela Hospital Medical Center and two smaller hospitals in the area, said that while fewer people are showing up at the emergency department seeking treatment, more are showing coronavirus-like symptoms and being admitted.

Centinela Hospital, a private institution which treats more than 60,000 patients a year in its emergency room, has set up two Covid-19 curbside tents outside its ER as it prepares for the outbreak to intensify as it has in New York.

About 80% of the ventilators at Centinela Hospital are now in use by patients, one hospital administrator said, and their supply is low. All of this increased need for hospital care is also impacting personal protection equipment supplies throughout Los Angeles County.

“We don’t have enough PPE. They often have to be rationed out,” Franklin said, noting that some hospitals will lock up the equipment in a drawer or cabinet.

As the US health-care system has scrambled to track the spread of coronavirus, one of the nation's largest commercial labs has faced a backlog of tests that ballooned in the past two weeks.

Delayed results in some cases take up to 10 days.

New Jersey-based Quest Diagnostics had about 160,000 coronavirus test orders waiting to be processed on March 25, which amounted to about half of the 320,000 total orders for the tests the company had received up to that date, according to Quest internal materials obtained by CNN.

The company, which is now testing for the virus at a dozen labs across the country, referred to the orders as a "significant amount of backlog," according to the materials.

Although a vast network of labs at public health departments and universities are also testing for the novel coronavirus, the Trump administration has leaned on commercial labs, which have greater capacity, to roll out widespread testing 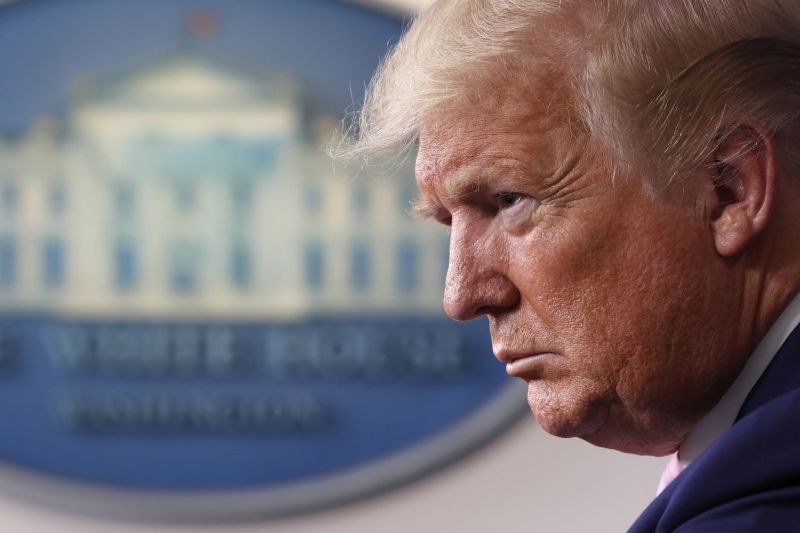 President Donald Trump at a briefing about the coronavirus pandemic at the White House on April 1. Alex Brandon/AP

The President said there should be some sort of flexibility among the states, depending on how bad individual states' situations might be.

“You have to look -- you have to give a little flexibility. If you have a state in the Midwest, or if Alaska for example doesn't have a problem, it's awfully tough to say close it down. We have to have a little bit of flexibility,” Trump said.

Some context: Surgeon General Jerome Adams said the 30 days to slow the spread guidelines should be viewed as a national stay-at-home order on Wednesday morning.

“My advice to America would be that these guidelines are a national stay-at-home order. There are guidelines that say, look, the more we social distance, the more we stay at home, the less spread of disease there will be,” Adams said. 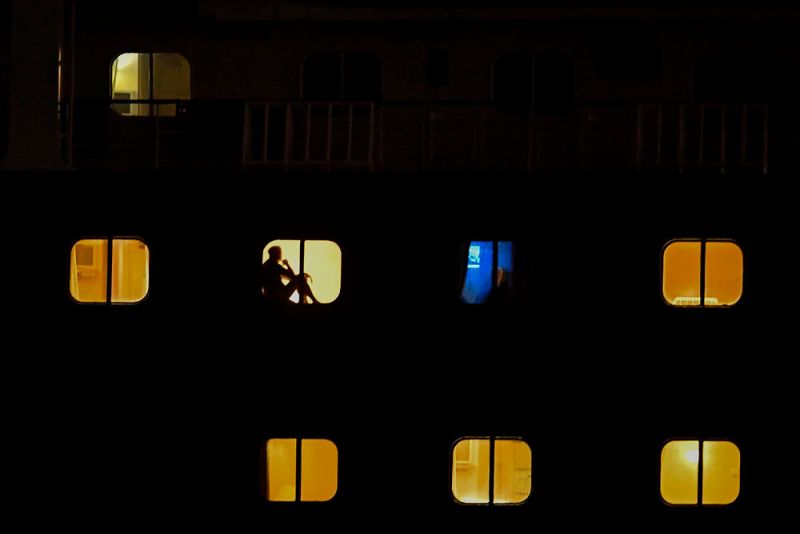 Passengers of Holland America's cruise ship Zaandam are seen as the ship navigates through the Panama Canal in Panama City, on March 29. Luis Acosta/AFP/Getty Images

President Donald Trump said on Wednesday that the UK and Canada were making plans to repatriate their citizens from two Holland America cruise ships currently off the coast of Florida.

Two cruise ships off Florida coast: Both the Zaandam and the Rotterdam are currently on their way to Florida, and have requested permission to disembark guests.

“We appreciate the support of President Trump in resolving the humanitarian plight of our guests,” Holland America said in a statement. “Holland America Line calls for compassion and reason in the review and approval of our disembarkation plan by Florida officials.”

Since March 22, 83 passengers and 136 crew onboard the Zaandam have exhibited flu-like symptoms. Eight passengers have tested positive for the novel coronavirus.

Four people on the Zaandam have died, but the cause of their deaths is unknown.

On the Rotterdam, 14 passengers have exhibited flu-like symptoms. 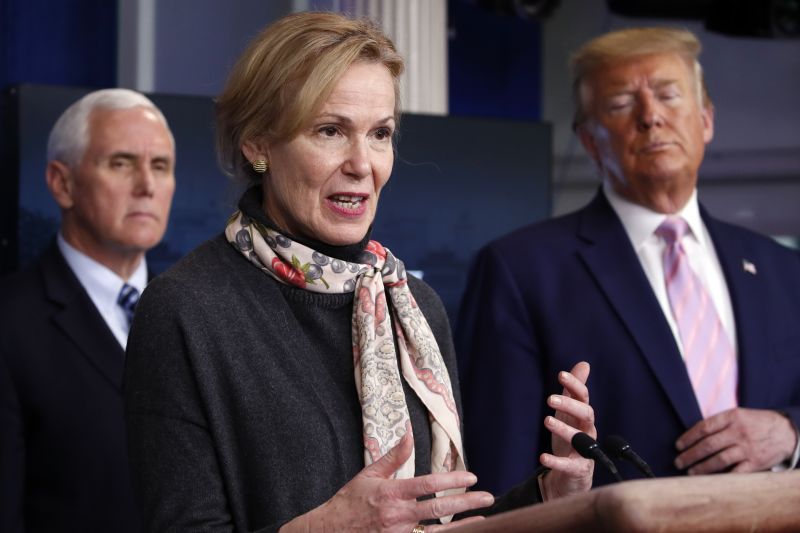 Dr. Deborah Birx said a coronavirus antibody test could be available “within this month” and says, “I've really called on every university and every state to develop ELISA’s, you can buy the antigens and the controls online, and really work to test entire health care communities in your state and support them that way.”

The ELISA, or enzyme-linked immunosorbent assay, detects and measures antibodies in blood. If successful, the test could help identify those who have already had the virus, but have since recovered.

Experts say that if a person has had the virus and developed antibodies, it will most likely mean they have built up immunity and the chances of that person being infected again drops dramatically.

Birx said that the test could help identify front-line medical workers who may have had the coronavirus and not know it.

“I think really being able to tell them, the peace of mind that would come from knowing you already were infected, you have the antibody, you are safe from reinfection. 99.9% of the time," Birx said.

Birx said a first test could be available, “soon, within this month if the universities help us, absolutely.”

There have been at least 917 new coronavirus deaths reported in the US on Wednesday, according to a count by CNN Health.

This is the most reported deaths in the United States in a single day during the coronavirus outbreak.

There have been a total of 4,745 deaths reported in the US since the outbreak began.

Captain Valeika was born in Moscow. Russian Russian mother, father-conductor, performed with Celine Dion and still supports Spartak
Scott Makemine: Looking cuts with Zidane, Vieira, Keane. Amazing box-to-box
Jessie Lingard: Last season, I didn't force myself or set goals. It's like a new start
Fjortoft about Werner: Timo is the best talent in Europe. If Liverpool want him, he will be there
The Union was suspended from matches the forward Poltera. The player did not want to take a pay cut
Ex-Guardiola assistant: Messi will be able to play in midfield like Xavi in a few years
Kante resumed individual training at the Chelsea base
Source https://edition.cnn.com/world/live-news/coronavirus-pandemic-04-02-20-intl/index.html