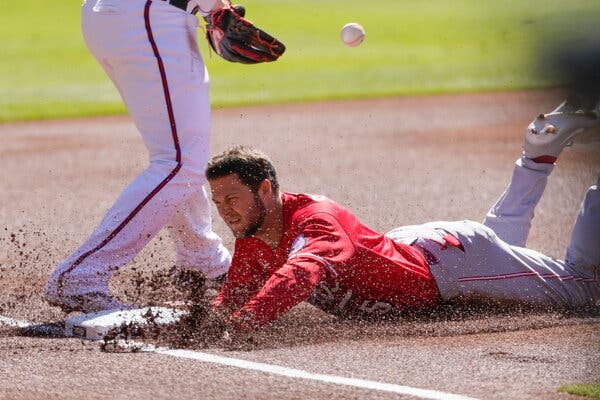 Nick Senzel of the Reds slid safely into third during the first game of the day, between Cincinnati and Atlanta.Credit...John Bazemore/Associated Press

Welcome to a Marathon Day of Playoff Baseball

It is Day 2 of the 2020 Major League Baseball postseason, and it is a doozy: An orgiastic, 13-hour baseball-a-thon, with an unprecedented series of eight playoff games on a virtual conveyor belt of high-stakes action.

It starts at noon Eastern time in Atlanta, with the next five games scheduled to begin every hour until the Yankees play in Cleveland at 7 p.m. Eastern time, and it lasts until the final pitch is thrown in Los Angeles between the Dodgers and Brewers, probably around 1 a.m., and half of them will be elimination games.

“It’s going to be crazy,” said Chicago White Sox pitcher Dallas Keuchel, who will pitch in the third game of the day against the Athletics in Oakland. “It’s almost kind of like a jumbled mess.”

Tuesday was the warm up-act, when baseball turned the page from an abbreviated regular season to an expanded postseason. There were four American League playoff games scheduled Tuesday, starting with the Houston Astros against the Minnesota Twins in Minneapolis.

But on Wednesday, when the National League joins the fray, the curtain will rise on the main stage for what may more closely resemble the early days of the N.C.A.A. basketball tournament than a traditional day of playoff baseball.

“March Madness is one of my favorite times of the year,” said Dusty Baker, the Astros manager, who is leading his fifth different team to the postseason. “This is like September Madness.”

The Marlins are in the postseason for the first time since 2003 after clinching their spot with a win at Yankee Stadium last Friday.Credit...Corey Sipkin/Associated Press

Today’s starter, Sandy Alcantara, was only 8 years old back then, and he’s coming off a strong September in which he lasted at least six innings in all five starts, with a 2.30 E.R.A. He’s backed by a surprisingly stout veteran bullpen cobbled together on the fly by Derek Jeter’s front office, which made 174 roster moves this season.

The Cubs, who start the efficient, soft-tossing veteran Kyle Hendricks, have many of the same characters who won the 2016 World Series, but few were very productive this season: Kyle Schwarber (.188 average), Javy Baez (.203), Kris Bryant (.206) and Anthony Rizzo (.222) all performed well below norms, but Ian Happ and Jason Heyward had strong seasons, and the Cubs are one of the best defensive teams in the majors.

George Springer helped deliver a Game 1 win for the Astros on Tuesday with a ninth-inning single.Credit...Jesse Johnson/USA Today Sports, via Reuters

Very few people outside of Houston have much interest in witnessing the Astros advance deeper into the playoffs, but that could happen today with one more win over the Minnesota Twins in their Wild Card matchup. The playoff-tested Astros, who incurred the wrath of so many fans for their sign-stealing in 2017, stunned the Minnesota Twins, 4-1, in Game 1 on Tuesday. Despite a mediocre season (Houston went 29-31), the Astros could earn a spot today in the divisional round of the playoffs for the fifth time in six years as they seek their second World Series title in four years.

The Twins, meanwhile, just want to win a game, just one game, and see what that feels like. They are desperately seeking their first postseason win since Game 1 of the 2004 division series at Yankee Stadium. Since that night, the Twins have lost 17 straight playoff games, the longest such streak ever among all four of the major North American sports. The Chicago Blackhawks are second, with 16 consecutive losses from 1975 through 1979.

Now, Minnesota’s season is in the hands of the right-hander Jose Berrios, who has a 6.43 earned run average in five career starts against the Astros. Houston responds with Jose Urquiddy, the beefy right-hander who showed his mettle out of the bullpen in last year’s playoffs when he allowed only one run in 10 postseason innings.

Trevor Bauer of the Reds is the favorite for the National League Cy Young Award, but he is facing a tough Braves lineup today. Credit...Aaron Doster/Associated Press

One of the fun things about these first-round matchups is that almost all teams are meeting for the first time. Teams played only within their geographic regions in the regular season, so the Braves and the Reds — two charter National League franchises — are just now facing off in 2020.

Last night in Cleveland, the Yankees flattened the Indians’ Shane Bieber when he stepped outside the comforts of the Central. Can the Braves do the same to Trevor Bauer? Like Bieber, Bauer is likely to win his league’s Cy Young Award. But the Braves have an extraordinary offense that ranked first in the majors in on-base plus slugging percentage (.832) and second in runs, behind the Dodgers. Can Bauer, a master pitcher and provocateur, tame Freddie Freeman, Ronald Acuna Jr. and friends? And if he does, will the Reds’ offense hit Max Fried and the Braves’ stingy bullpen?

Batting average isn’t everything, of course, but it’s still worth noting that the Reds hit only .212 this season — the lowest mark in the majors since the 1910 White Sox.

Hans-Dieter flick: I Hope Alaba will sign a contract with Bayern. Our club is one of the best in the world
Diego Maradona: Messi gave Barca everything, brought them to the top. He was not treated the way he deserved
Federico Chiesa: I hope to leave my mark in Juve. We will achieve great results
The Coach Of Benfica: I don't want us to look like the current Barcelona, it has nothing
Guardiola on returning to Barca: I'm happy at Manchester City. I hope to stay here
Fabinho will not play with West ham due to injury
Ronald Koeman: Maradona was the best in his time. Now the best Messi
Source https://www.nytimes.com/2020/09/30/sports/baseball/live-mlb-playoffs-scores.html