“Glee” alum Lea Michele has apologized to her former costars after actress Samantha Marie Ware accused Michele of subjecting her to verbal abuse and “other traumatic microaggressions” on set.

A couple days after Ware’s takedown tweet went viral, Michele issued a statement Wednesday claiming she did not recall a particularly damning incident mentioned by Ware, but promised to be better going forward.

“While I don’t remember ever making this specific statement and I have never judged others by their background or color of their skin, that’s not really the point,” Michele said in a statement provided to People magazine. “What matters is that I clearly acted in ways which hurt other people.

“Whether it was my privileged position and perspective that caused me to be perceived as insensitive or inappropriate at times or whether it was just my immaturity and me just being unnecessarily difficult, I apologize for my behavior and for any pain which I have caused. We all can grow and change and I have definitely used these past several months to reflect on my own shortcomings.” 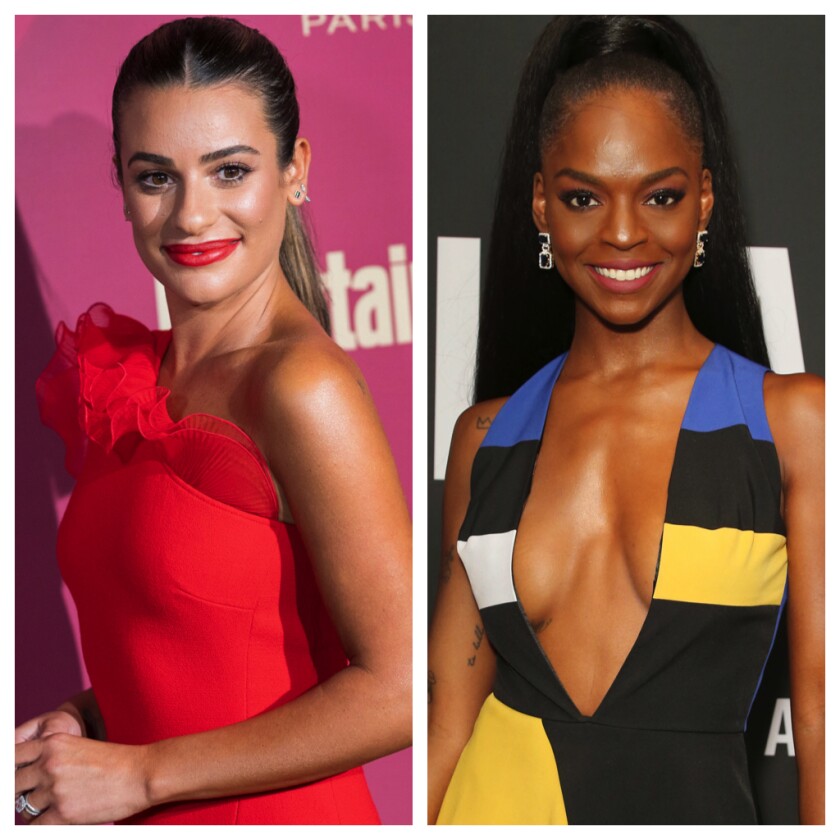 Since Monday night, Ware’s tweet dragging Michele has amassed more than 460,000 likes and 6,000 replies, including words of encouragement from fellow “Glee” star Alex Newell and other Hollywood figures. The allegations were made in response to an earlier tweet from Michele saluting George Floyd with the hashtag #BlackLivesMatter.

“LMAO REMEMBER WHEN YOU MADE MY FIRST [TELEVISION] GIG A LIVING HELL?!?! CAUSE ILL NEVER FORGET,” Ware wrote. “I BELIEVE YOU TOLD EVERYONE THAT IF TOU HAD THE OPPORTUNITY YOU WOULD ‘S— IN MY WIG!’ AMONGST OTHER TRAUMATIC MICROAGRESSIONS THAT MADE ME QUESTION A CAREER IN HOLLYWOOD...”

Actress Yvette Nicole Brown, who worked with Michele on “The Mayor,” Candice Patton of “The Flash,” Lesley-Ann Brandt of “Lucifer,” Oscar-winning director Matthew A. Cherry and Newell all backed Ware up with supportive comments. And by Tuesday afternoon, food company HelloFresh cut ties with Michele after partnering with her in January.

HelloFresh does not condone racism nor discrimination of any kind. We are disheartened and disappointed to learn of the recent claims concerning Lea Michele. We take this very seriously, and have ended our partnership with Lea Michele, effective immediately.

“One of the most important lessons of the last few weeks is that we need to take the time to listen and learn about other people’s perspectives and any role we have played or anything we can do to help address the injustices that they face,” Michele said in her apology.

“When I tweeted the other day, it was meant to be a show of support for our friends and neighbors and communities of color during this really difficult time ... but the responses I received to what I posted have made me also focus specifically on how my own behavior towards fellow cast members was perceived by them.”

Michele and Ware starred together in the final season of “Glee,” which saw Michele’s Rachel Berry recruit Ware’s Jane Hayward for the high school show choir. Newell, who played Unique Adams, said Ware’s all-caps declaration “felt like claps” and thanked her for reminding him that he still followed Michele on Twitter (so that he could unfollow her).

Though she didn’t reply to Ware’s tweet directly, Amber Riley, who played Mercedes Jones on “Glee,” chimed in with a pointed gif of herself sipping from a mug. And Melissa Benoist, who played Marley Rose on the musical dramedy, liked her fellow “Glee” alumni’s tweets in silent support.

MLS is back: almost 9 minutes of protest against racism and a giant virtual adidas logo in the center of the field
Solskjaer on MATIC: I'm Glad he stayed. We need experience in a team with children who run around
Germany manager Bierhoff: Havertz is a player for Real Madrid
Buffon's agent: Gianluigi should become a coach. He can lead Juve
Barcelona won the court against Santos in the Neymar case. The Brazilians demanded more than 61 million euros
Jamon, cheese, wine, tortilla and the best view of the stadium. The only La Liga club playing in front of the fans
Vinicius test for coronavirus, showed deviation from the norm. Real expects new results by the evening
Source https://www.latimes.com/entertainment-arts/tv/story/2020-06-03/lea-michele-apology-samantha-marie-ware-glee-tweet