A Los Angeles police officer who once served as part of Mayor Eric Garcetti's security detail claims one of his advisers sexually harassed him for several years in the presence of the mayor, who did nothing to stop it, according to a lawsuit.

Officer Matthew Garza alleges in the complaint that he was subjected to unwanted harassment from Rick Jacobs, a senior political adviser to the Democratic mayor.

Garza began working as part of Garcetti's protection detail in October 2013, KTTV-TV reported. Officers assigned to the team would routinely accompany the mayor to and from functions and various engagements in and outside Los Angeles.

Between 2014 and 2019, Garza alleges Jacobs would hug him without consent and make unprofessional remarks like: "you’re so strong and handsome," "your muscles are so tight" and "I love me my strong LAPD officers." 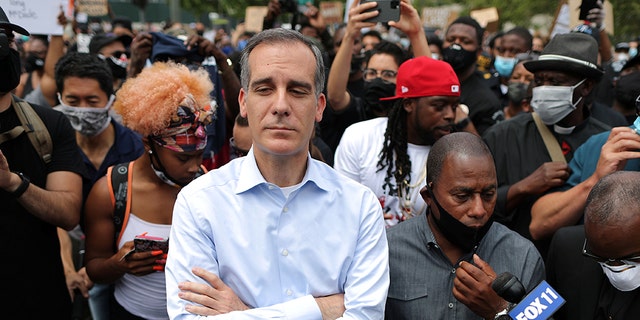 A Los Angeles police officer who was once assigned to Mayor Eric Garcetti’s security detail claims in a lawsuit that an aide sexually harassed him for years in the presence of the mayor. (REUTERS/Lucy Nicholson)

Other instances included Jacobs pulling Garza toward him for tight hugs when both men shook hands, according to the complaint. Garcetti was present for around half of the occasions when Jacobs engaged in inappropriate behavior but remained silent, the lawsuit said.

The complaint claimed Jacob's behavior was "silently condoned by the Mayor and City of Los Angeles."

Garza's job duties required him to frequently interact with Jacobs, who often talked about his young male lover and about having "rough sex" with his partners and being attracted to younger men, the lawsuit said.

Garza was forced to interact regularly with Jacobs around 2017 as Garcetti was mulling a presidential run, the suit said.

In a statement, Jacobs called the lawsuit "pure fiction."

"This lawsuit is a work of pure fiction, and is out of left field," he said. "Officer Garza and I worked together for many years without incident. I will vigorously defend myself, my character and my reputation."

Garcetti's office did not return requests from Fox News for comment. The LAPD declined to comment, citing a longstanding department policy of not commenting on pending litigation.

Jacob's behavior didn't go unnoticed by mayoral staffers, the suit said. One staffer allegedly told Garza, "I'm sorry you have to deal with that, he's such a pig."

On June 18, Garza refused to return to the security detail assignment after taking a leave of absence for a back injury. He cited the "touchings" and vulgar behavior directed at him by Jacobs, the lawsuit said.

As a result, he lost his rank and took a salary decrease and lost $20,000 in annual overtime, according to the complaint.

Jacobs has been previously accused of wrongdoing. He allegedly used the power of the mayor's office to threaten a group over its opposition to a tax proposal supported by Garcetti.

Tracy Hernandez, founding chief executive of the Los Angeles County Business Federation, said Jacobs told her in 2018 that members of her group who campaigned against the tax measure would be barred from doing business with the city for four years, the Los Angeles Times reported.

Coutinho scored a double against Barca in less than 4 minutes. It belongs to the Catalan club
Barcelona did not win the Champions League, La Liga, or the Spanish Cup for the first time since 2014
Messi won't win the Champions League for the 5th year in a row
Perisic's goal proves more clearly than any other that Barcelona is no longer the same. All froze on place, and Semedu shoved the ball Roberto (and his immediately ate)
Barcelona conceded 5 goals in a Champions League match for the first time in history
Bayern have scored 36 goals for the season in the Champions League. This is their record
Mueller came in 3rd place for goals scored in the knockout stages of the Champions League. Only Messi and Ronaldo have more
Source https://www.foxnews.com/us/lapd-officer-sues-city-over-sexually-harassment-claims-alleges-mayor-garcetti-didnt-try-to-stop-it?utm_source=feedburner&utm_medium=feed&utm_campaign=Feed%3A+foxnews%2Fnational+%28Internal+-+US+Latest+-+Text%29

'Having a hard time.' President Trump's brother Robert is hospitalized in New York

Opinion: NCAA must embrace bubbles may be only way to save the NCAA tournament in 2021

100 years ago, Poland saved the West from Communism

What a Mail Carrier Is Seeing on the Ground Right Now

These 5 textured hair-friendly hair dryers are so bomb

The girly ‘Strawberry Dress’ is the hottest look of summer 2020

Stream It Or Skip It: ‘Upright’ On Sundance Now, An Australian Dramedy About Two Misfits On A Cross-Continent Road Trip

For Clint Frazier, Another Chance to Prove He Belongs in the Bronx

Shirkey: Michigan needs to "suffer through" budget woes rather than rely on feds

Greenland's ice sheet has melted to point of no return

Harris: Biden broke 'one of the most substantial barriers that has existed' in naming her as VP pick

Older Children and the Coronavirus: A New Wrinkle in the Debate

WSJ calls US Postal Service 'a Blockbuster in a Netflix world,' says its woes predate Trump

The Most Incomprehensibly Thrilling Ad of the 2020 Election So Far

MHSAA sacks football until spring; other fall sports can be played

Trump on Sending Direct Payments: ‘Democrats Are Holding This Up’

Wildfires have scorched about 100,000 acres in 3 states. The weather could make things worse

Marge Simpson uses her voice to call out Trump adviser

With QAnon, Trump and other Republicans head into the sewer

Under Trump, SEC Enforcement Of Insider Trading Dropped To Lowest Point In Decades

Michigan SOS: More than 10,000 primary election ballots invalid, many due to late arrival

Biden shouldn't rule out a second term if he wins

Male stripper gets 16 years in prison for threats to witness

Royals vs. Twins prediction: All signs point to Kansas City

Stream It Or Skip It: ‘Fearless’ on Netflix, a Generic Animated Movie From the Maker of ‘Hoodwinked’

Ashley Graham has been growing out her armpit hair in quarantine: 'My mom is fully disgusted'

Watch Our Webinar On The Future of Your Childs’ Education

Dhoni, other CSK players reach Chennai for camp ahead of IPL

(Un)Well Sets Out to Debunk Shady Wellness Claims, But It Can’t Make Up Its Mind

By sea, rail or by air, Brits scramble to get out of France

Canada Says US Border to Remain Closed to Non-Essential Travel