L.A. Pride will now be a protest against police brutality

Protests could lead to spread of COVID-19

As Los Angeles celebrates 50 years since its first Pride parade, organizers of the event announced a change of plans on Wednesday. The parade was initially canceled due to the coronavirus pandemic, but now it's back on — as a protest against racial injustice and police brutality.

Christopher Street West (CSW), the nonprofit that organizes the annual parade, said a solidarity march will replace the parade on Sunday, June 14, in response to "racial injustice, systemic racism and all forms of oppression." Last month, organizers canceled the event and moved the celebrations online to prevent further spread of COVID-19.

Since the death of George Floyd last week, protests have erupted in cities across the U.S. and around the world. Hundreds of arrests have been made in Los Angeles alone, despite the protests being characterized as largely peaceful.

Activists plan to assemble peacefully June 14 at 10 a.m. local time at Hollywood Blvd. and Highland Ave. in Los Angeles, near the location of the first-ever legal Pride Parade that took place in 1970, one year after the uprising at the Stonewall Inn in New York. In a news release Wednesday, organizers highlighted the overlapping missions of Pride and the Black community. 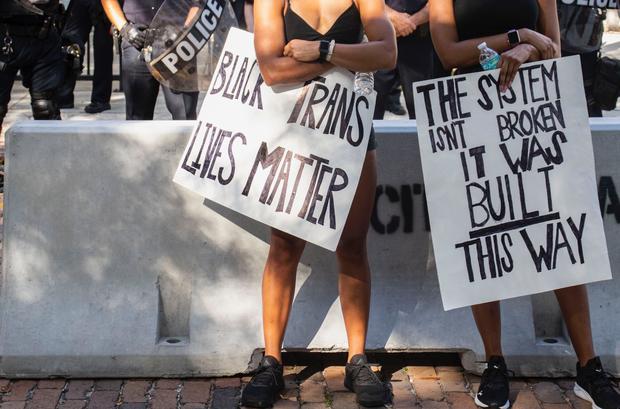 As dozens of Tampa Police officers stood in riot gear on the outskirts of a police brutality protest on Sunday, May 21, 2020, activists lined up to show the officers their signs and messages, one of which said, "Black Trans Lives Matter." CBS News' Li Cohen

"Fifty years ago Christopher Street West took to the streets of Hollywood Blvd in order to peacefully protest against police brutality and oppression," said Estevan Montemayor, president of the CSW Board of Directors.

"It is our moral imperative to honor the legacy of Marsha P. Johnson and Sylvia Rivera, who bravely led the Stonewall uprising, by standing in solidarity with the Black community against systemic racism and joining the fight for meaningful and long-lasting reform."

It's unclear whether the march is a collaboration with Black Lives Matter. The L.A. division of the organization did not immediately respond to CBS News' request for comment.

Many supporters expressed their concerns on Twitter over holding a mass gathering while the city is still under partial lockdown orders. Organizers stressed the importance of wearing face masks, in accordance with California Department of Public Health guidelines, but did not specify if any special coronavirus-related safety measures would be put in place.

Health officials have warned that a resurgence of cases in cities where protesters gathered could lead to a need for further shutdowns. 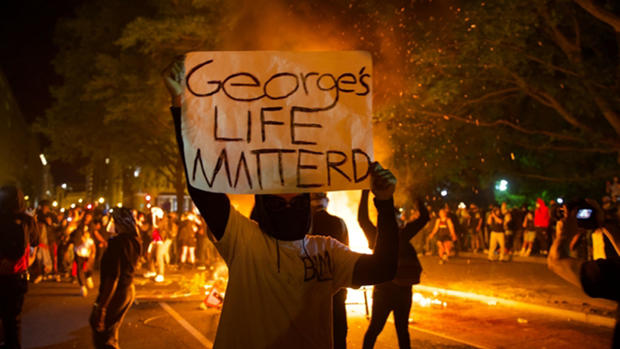 Atalanta captain Gomez is the first Serie A player in the twenty-first century to give 15 assists in a season
Manchester City arranged a championship corridor for Liverpool
Mohamed Salah: I hope to stay in Liverpool for a long time
La Liga President: Many try to justify failures on the field by talking about rest and schedule
Rivaldo on Griezmann: I Don't understand why the world champion and multi-million dollar transfer only comes out at the last minute
The Doctor Sociedad: The Youngster from serious injury. We are not currently considering the option of surgery
Klopp made Liverpool Champions. Now it's your turn: the game Showsport
Source https://www.cbsnews.com/news/los-angeles-pride-parade-solidarity-protest-march-against-police-brutality/

Native tribal leaders are calling for the removal of Mount Rushmore

Mount Rushmore hasn't had fireworks for more than a decade because it's very dangerous. Here's why

Stream It Or Skip It: ‘The F**k It List’ on Netflix, a Tone Deaf Blend of Teen Comedy and Coming-of-Age Drama

No one cares that this Houston street sign is wrong. Except for me

Black woman followed, confronted by white man in her own neighborhood; police investigating

Child care is essential to reopening the economy

Trump's approach to the presidency: Ignore the challenges and embrace the easy

These travel-size beauty kits at Ulta are all under $20

Over 80 killed in Ethiopia unrest after singer shot dead

$1 billion shortfall, furloughs could bring US immigration system to a halt

Column: Fans may not like what they see on return to stands

US, Russia share a complex and bloody history in Afghanistan