She just tweeted this to Douglas Emhoff:

About Emhoff: The Brooklyn-born Emhoff had been a quietly supportive presence during Harris' own 2020 run. He was often spotted backstage or at the edge of Harris' crowds at both her campaign events and book tour events last year, although he once rushed onstage to grab an animal rights protester who leapt on stage Saturday to confront Harris.

The Brooklyn native, who moved to Southern California in his teens and attended the USC Gould School of Law, launched his own firm in 2000 before Venable acquired it in 2006. At DLA Piper, Emhoff has continued to focus on business, entertainment and intellectual property law in both California and Washington, DC.

The couple was set up on a blind date in 2013 when Harris was California's attorney general by her best friend, Chrisette Hudlin. 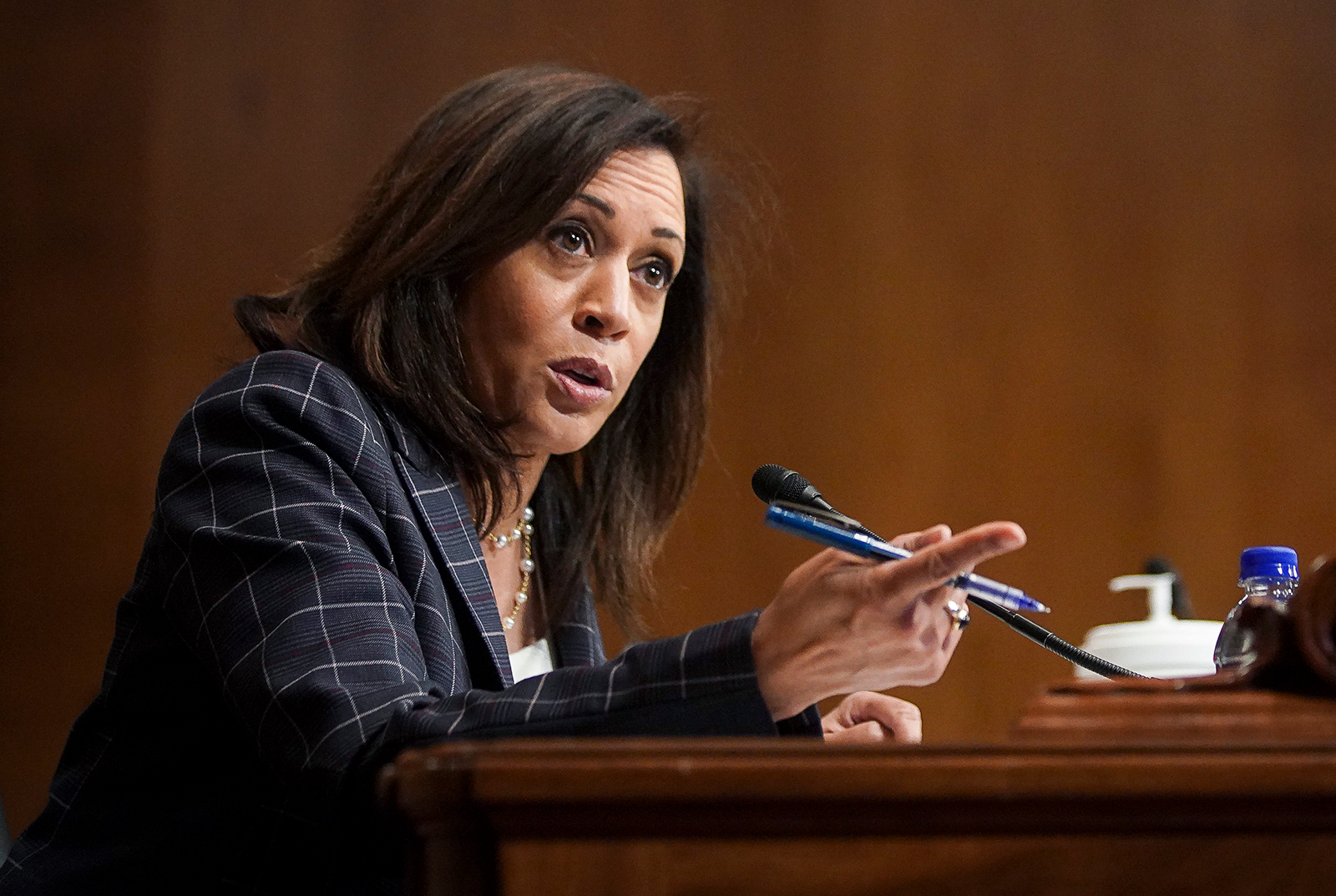 Kamala Harris speaks at a hearing of the Homeland Security Committee on June 25, in Washington, DC. Alexander Drago/Getty Images

A reminder that President Trump less than two weeks ago said that Sen. Kamala Harris would be a "fine choice."

Trump made the comment in response to a question about veepstakes as he was leaving the White House on July 29.

Here are the tweets:

Pelosi said Harris "will continue her legacy of trailblazing leadership to move our nation forward."

The Biden campaign has announced that Joe Biden and Kamala Harris will give remarks tomorrow in Wilmington, Delaware. The time of the event has not been announced.

Abrams tweeted that she is thrilled to support Harris as the next vice president and that Biden's focus is "on reaching out to every corner of our country." 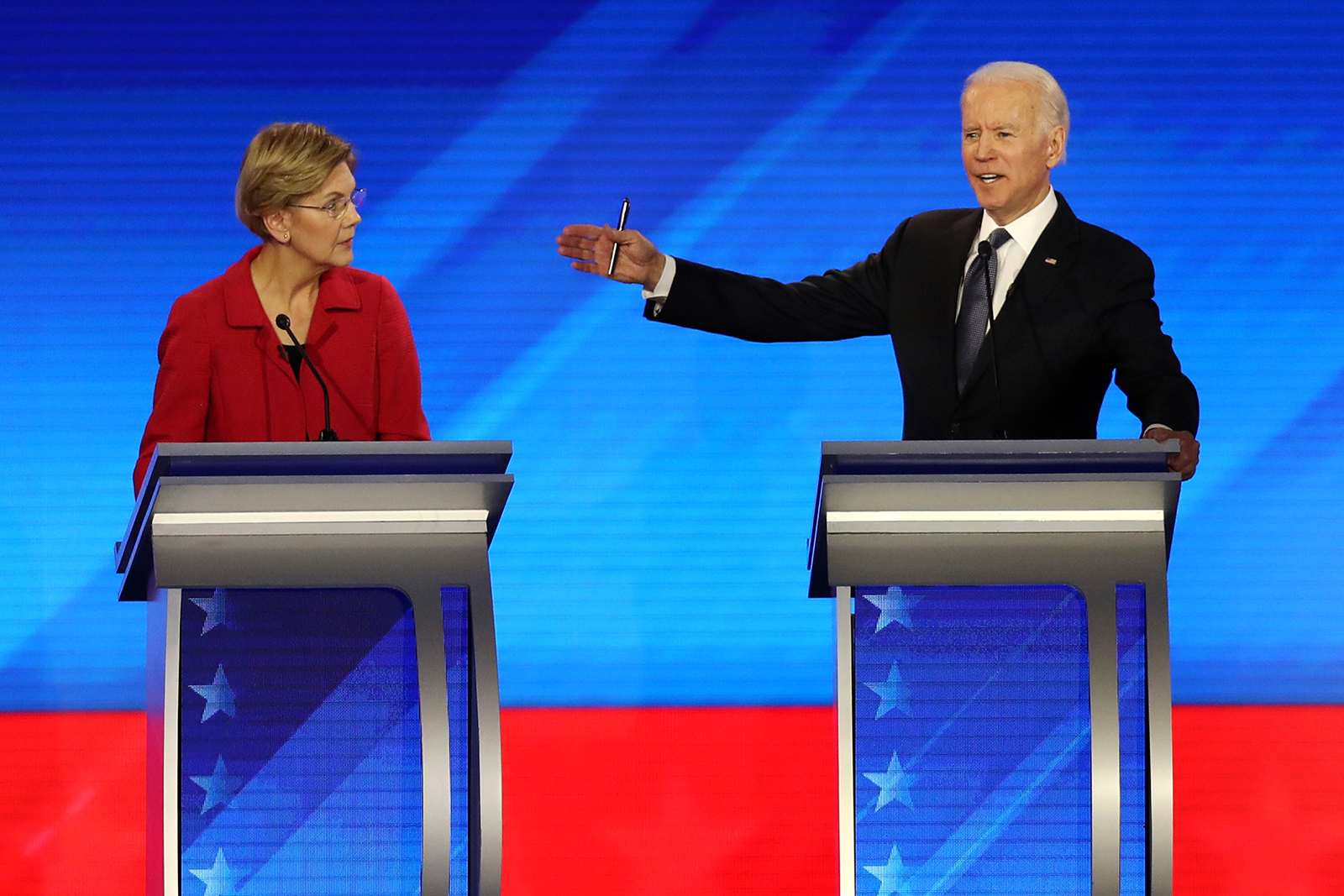 Joe Biden called Sen. Elizabeth Warren, a Democrat from Massachusetts, himself earlier today to inform her that she would not be chosen as his running mate, according to a source familiar.

Following Joe Biden's announcement that Kamala Harris will be his 2020 election running mate, the candidate's campaign website was updated to show a photo of both candidates together. 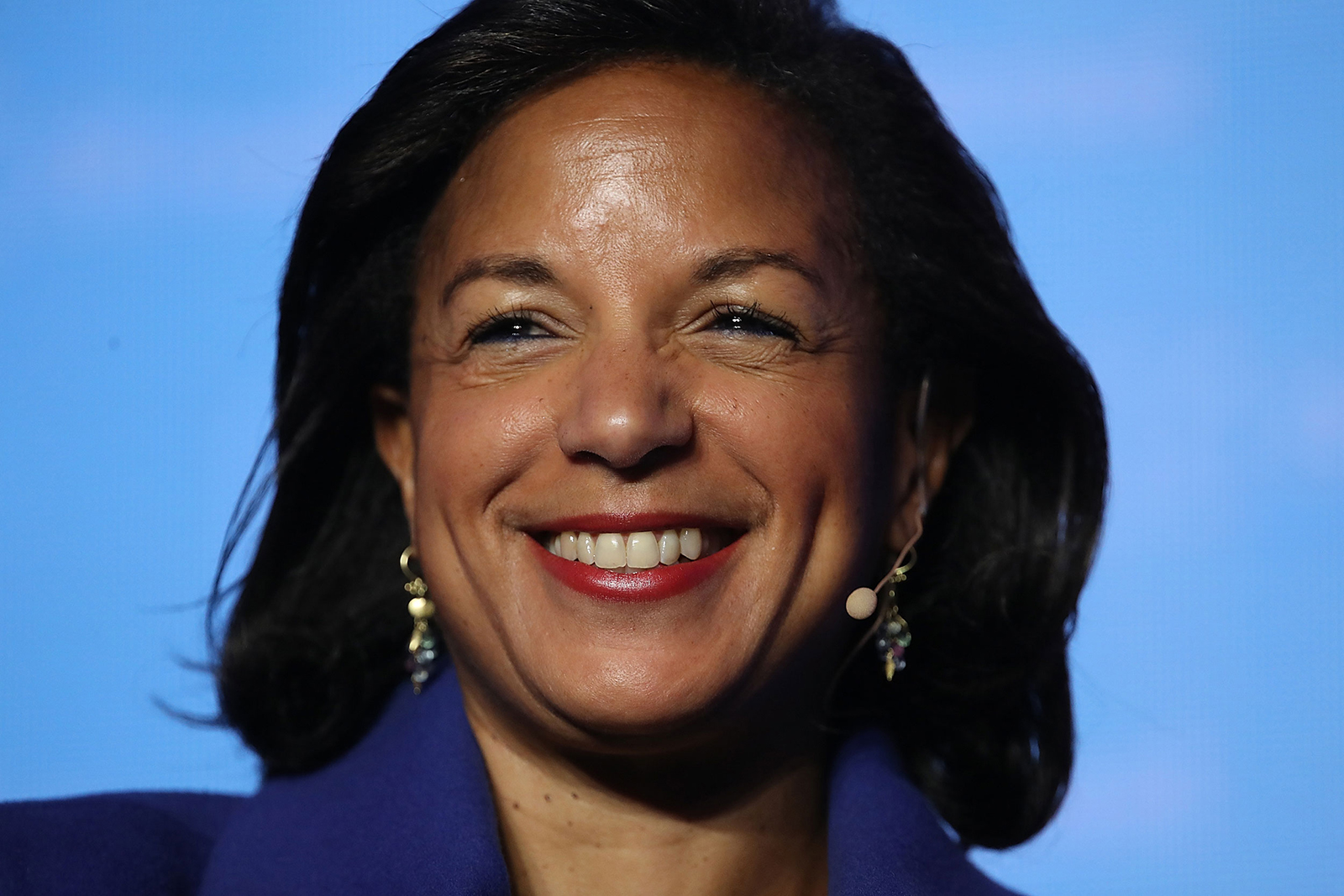 "I warmly congratulate Senator Kamala Harris on her selection as Joe Biden’s Vice Presidential running mate," Rice said in a statement. "Senator Harris is a tenacious and trailblazing leader who will make a great partner on the campaign trail. I am confident that Biden-Harris will prove to be a winning ticket."

Rice said she would do her "utmost to assist Joe Biden to become the next president of the United States and to help him govern successfully."

"Joe Biden’s principled and responsible leadership is what America urgently needs to: provide working families desperately needed support and opportunity; defeat the coronavirus and revive our economy; renew America’s standing in the world and protect our national security; redress our longstanding racial and socio-economic disparities; and restore the rule of law, respect for our Constitution and faith in our democracy. Corrupt and self-serving, Donald Trump has sold America out for his personal gain. It’s essential that we bring integrity, empathy, decency, and competence back to the White House with the election of Joe Biden. I look forward to supporting the Biden-Harris ticket with all my energy and commitment." 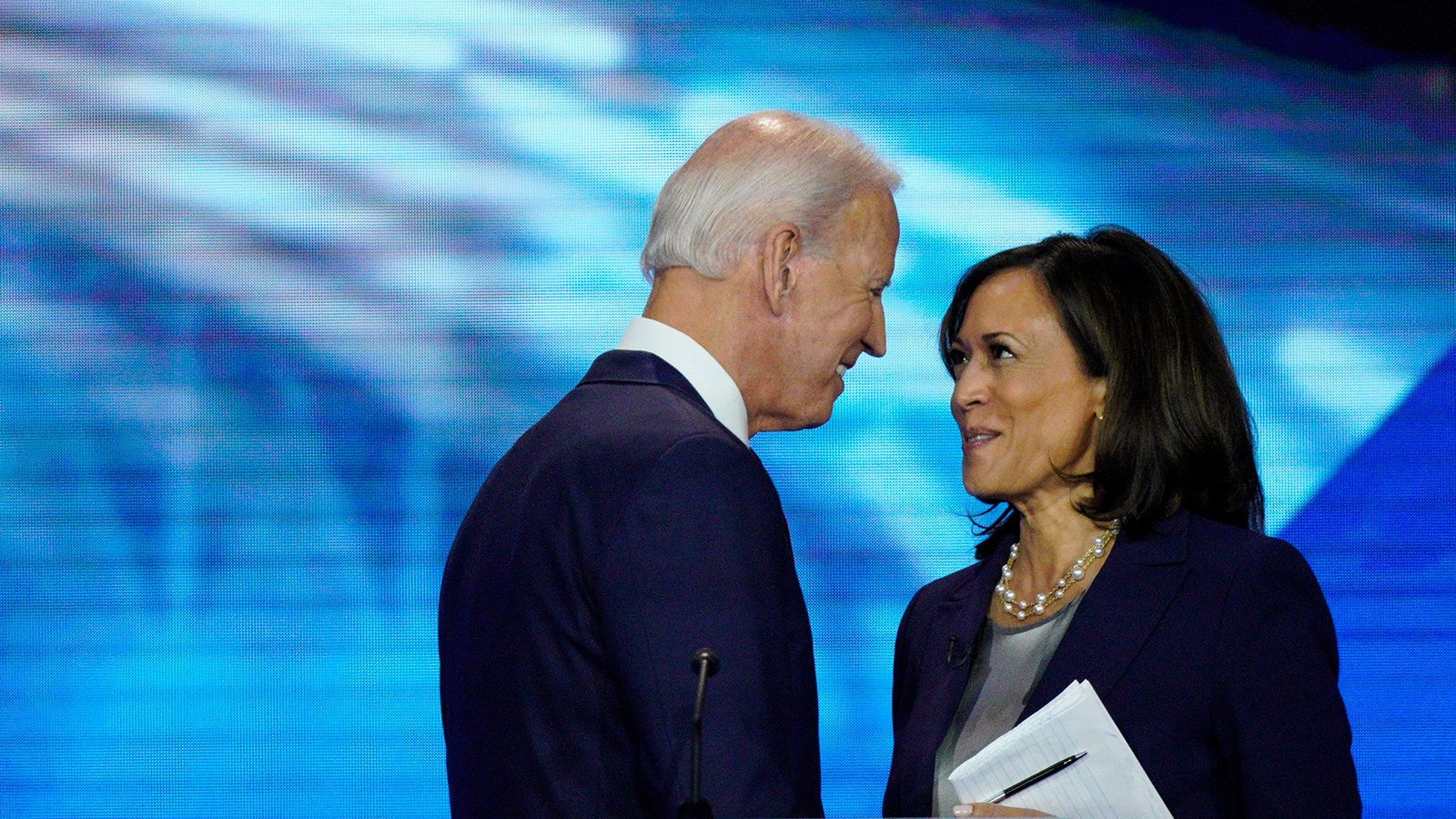 Joe Biden announced Tuesday that Kamala Harris will be his running mate for the 2020 election ballot, making the California senator the first Black woman to run on a major political party’s presidential ticket.

In selecting Harris, Biden adds a former primary rival who centered her own presidential bid on her readiness to take on Trump and show Americans she would fight for them.

Aware that his age could be a concern to some voters, Biden, 77, has said that he is “a bridge” to a new slate of Democratic leaders, and by selecting Harris, more than 20 years his junior, he has elevated a leading figure from a younger generation within the party.

Within the pantheon of female candidates that the former vice president considered, Harris was long viewed as the most-likely choice because of the breadth of her experience as a US senator, former California attorney general and former district attorney of San Francisco.

While potential candidates like Atlanta Mayor Keisha Lance Bottoms, California US Rep. Karen Bass and Florida Rep. Val Demings were viewed as fresh-faced additions to the ticket, none of them had been vetted by Democratic voters like Harris, nor did they have her experience in all levels of politics. With her multi-racial background as the child of two immigrants to the United States, her allies believed she could complement Biden as a symbol of a changing America.

She also proved to be a hardworking surrogate for Biden in recent months, taking part in everything from virtual policy events with voters in swing districts to a live DJ dance party fundraiser with Diplo and D-Nice online.

Still, some members of Biden’s team resisted choosing Harris. A recent Politico story noted that former Sen. Chris Dodd of Connecticut, who was helping vet candidates, was still galled by her attack on Biden during a June 2019 debate in Miami when she criticized his work with segregationist senators and highlighted his fight against busing to desegregate schools decades ago.

The pushback against Harris apparently became so strong that Biden felt the need to defend her during his July 28 press conference, where an Associated Press photo captured the talking points about her on his notecard that included “do not hold grudges” and “great help to campaign.”

Harris also benefited from being a running mate who could match this turbulent moment in American history.

Many of the issues at the center of her life’s work — including criminal justice reform, improving healthcare for Black Americans and tackling income inequality — have come to the forefront in the three-pronged crisis America is now facing: the coronavirus pandemic (which has disproportionately affected communities of color), the fight against systemic racism and an economic recession.

Harris took a rock to the head for supporting her friend:

Robles on refereeing the match with Real Madrid and VAR: dubious episodes are always Interpreted in favor of top clubs
Conte on 4:3 with Fiorentina: impressed with Inter's attack. We didn't have enough balance, we paid for it
Zidane about 3:2 with Betis: real can get better and will. A difficult game, but we believed in winning until the end
Dest said goodbye to the Ajax players and will fly to Barcelona today (Gerard Romero)
Vidal made his debut for Inter in the match against Fiorentina
Barcelona will only consider Zinchenko if Firpo leaves
The referee after VAR for a foul on Jovic removed defender Betis Emerson
Source https://edition.cnn.com/politics/live-news/2020-election-biden-vp-pick/index.html?utm_source=feedburner&utm_medium=feed&utm_campaign=Feed%3A+rss%2Fcnn_latest+%28RSS%3A+CNN+-+Most+Recent%29