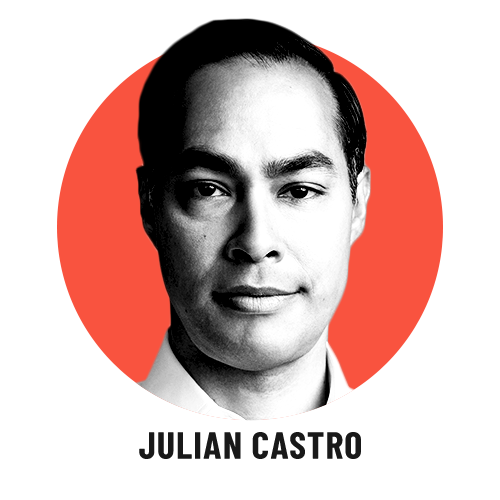 This is a common memory among Latinos. For more than half a century, Goya has been a staple of our dinner tables. The company has helped so many Latino families to cook the recipes that have been passed down from one generation to the next, and Latinos have rewarded Goya with tremendous brand loyalty.

That's why it was baffling to watch the CEO of Goya Foods, Robert Unanue, stand alongside President Donald Trump in the Rose Garden last week and declare that Americans are "truly blessed" to have Trump as president because he is a "builder." Unanue's comments were offensive because he and his Spanish-American family have profited mightily from Latinos, the very people that Trump has treated like a piñata for his own political profit.

What Unanue doesn't seem to appreciate is that his words have consequences. They give cover to Trump's bigotry and prop up a man who seems determined to make life harder for people of color in this country.

That's why a number of prominent Latino leaders, including Representative Alexandria Ocasio-Cortez and Hamilton star Lin-Manuel Miranda are encouraging consumers to reconsider purchasing Goya products.
Of course, there has been backlash from Trump partisans like Donald Trump Jr. and Senator Ted Cruz who have quickly jumped at the opportunity to call this cancel culture or an attack on free speech — never mind that, under the banner of free speech, Cruz advocated a boycott of Nike last year for canceling the release of the "Betsy Ross flag" sneaker design reportedly at Colin Kaepernick's urging.
Unanue himself went on Fox News to label the backlash to his Trump support as a "suppression of speech," adding that he was "not apologizing."

But every corporate CEO should understand that free speech works both ways.

Yes, companies and their executives are free to support whomever they wish. They can embrace a bigot who said an American judge couldn't be impartial because he's "Mexican." They can support a policy maker who is actively trying to deport Dreamers. They can stand side-by-side with a president who neglected and insulted Puerto Ricans in their greatest time of need. They can even join a press conference with a politician who called Mexicans "rapists" in his very first campaign press event.

But just as Unanue is free to heap praise on a president with a history of attacking Latinos, consumers who reject Trump's bigotry are free to leave Goya's products on the shelf and choose one of its competitors instead.

Today, company values matter to consumers more than ever before, and those values are often expressed not only through charitable activities but through political ones as well. Companies should expect consumers to be swayed by both. Just as consumers will take note of Goya's donation of two million pounds of food to food banks during the coronavirus crisis, they will also consider the damage that Unanue has done by buddying up to a bigot.
Millions of Latino families grapple every day with the fear that they or a family member will be deported, as the Trump administration has vowed once again to eliminate DACA and threatens further deportations using ICE. And, in the wake of a national reckoning over police violence following the death of George Floyd, Latinos know all too well the experience of being brutalized or killed by police, as the families of Antonio Arce, Andres Guardado and Carlos Ingram-Lopez can attest.

There was a time when corporations could play their politics and consumers would hardly pay attention. But, in this political and economic climate, things have changed dramatically. No longer can corporations hire high-priced lobbyists, spend millions influencing politicians or praise a bigoted president a few months before an election at a campaign-style event and not expect consumers to react.

Political differences are a healthy part of our democracy, but this is a time of great hardship. According to a New York Times analysis, Latinos have contracted the novel coronavirus at three times the rate of White Americans and are significantly more likely to die from Covid-19 as well. At the same time, Latinos have among the highest unemployment rates, and many who are employed are concentrated in jobs that pay low wages and expose them to greater health risk. The last thing many Latinos want to hear is the CEO of a company that they spend so many of their hard-earned dollars on delivering high praise for Trump, the very person who has made things worse for them.
The Latino community's purchasing power is expected to grow to more than $1.9 trillion by 2023. These consumers have the ability to choose products that align with their values. As long as Goya stands shoulder-to-shoulder with a man like Donald Trump, plenty of consumers who believe in equality will have no problem telling the company to "Goyaway."

Liverpool are close to buying a defender for Olympiakos Tsimikas. Medical check-up-this week
Barcelona intends to sign Bernardo Silva. City can get Semeda
Real are planning to buy Dybala and are ready to include Kroos or ISCO in the deal (Sport Mediaset)
Conte about Inter before the 1/4 Europa League: we Continue to progress, we become stronger
Piontek is Interesting to Fiorentina. Herta wants just over 20 million euros
Barzagli or Grosso will replace Pirlo in Juventus U23
Daudov about Akhmat: I am Sure that the team will Interact better with each new game
Source https://edition.cnn.com/2020/07/14/perspectives/goya-boycott-julin-castro/index.html?utm_source=feedburner&utm_medium=feed&utm_campaign=Feed%3A+rss%2Fcnn_latest+%28RSS%3A+CNN+-+Most+Recent%29

This is what distance learning should look like in the fall

Australia's oldest micronation, Hutt River is no more thanks to Covid-19

Australia's oldest micronation is no more thanks to Covid-19

Lyon the team to beat at Women’s Champions League finals

Black Activist Burnout: 'You Can't Do This Work If You're Running On Empty'

She Explains ‘Mansplaining’ With Help From 17th-Century Art

I Am the C.E.O. of Uber. Gig Workers Deserve Better.

Amazon Satellites Add to Astronomers’ Worries About the Night Sky

Stephen Hahn, F.D.A. Chief, Is Caught Between Scientists and the President

Start-Ups Braced for the Worst. The Worst Never Came.

I Have a Cure for the Dog Days of Summer

'Time for innovation': How tutoring could be a key to lifting kids out of 'COVID slide'