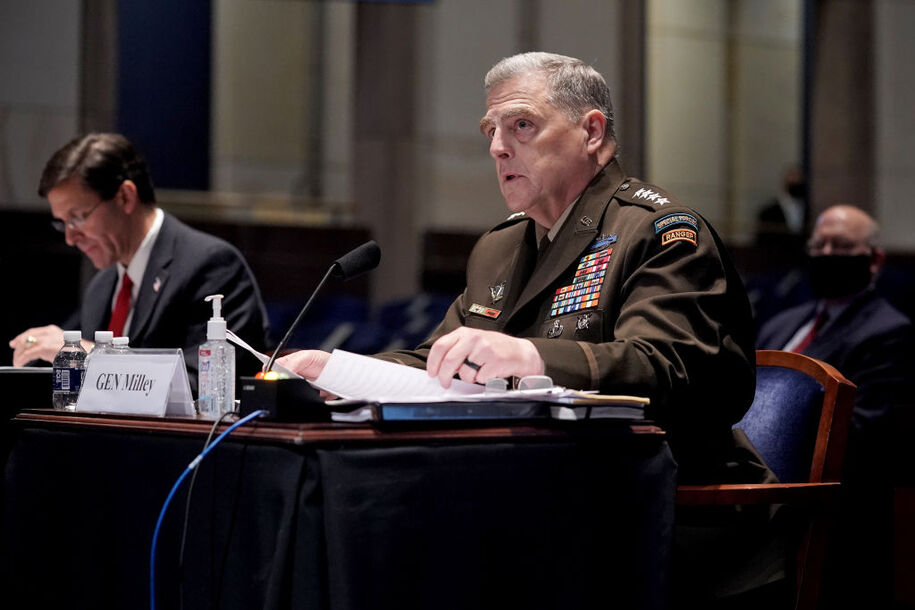 Chairman of the Joint Chiefs of Staff Gen. Mark Milley testifies before a House Armed Services Committee hearing on July 9, 2020 in Washington, D.C.

America's top military guy, Chairman of the Joint Chiefs of Staff Gen. Mark Milley, was last seen telling reporters that he had no idea that police and military forces were being used on the evening of June 1 to attack peaceful demonstrators in Lafayette Square so that Donald Trump could walk to his Bible photo op at historic St. John's Church—a walk for which Milley donned his battle fatigues. Milley apparently has used the past month for reflection on his part in that anti-Black Lives Matter display from the White House, because when he spoke to the House Armed Service Committee, he had a lot to say about renaming military bases to erase Confederate leaders.

"[T]hose officers turned their back on their oath," he said of the Confederate generals whose names still identify some bases. "It was an act of treason, at the time, against the Union, against the Stars and Stripes, against the US Constitution." Treason. That's not going to go down well for the racist squatting in the Oval Office. Milley said the names have to go, but "the way we should do it matters as much as that we should do it," and recommended establishing "a commission of folks to take a hard look at the bases, the statues, the names and all of this stuff, to see if we can have a rational, mature discussion" on this issue. Rational and mature? Does he know who he works for?

The Senate Armed Services Committee passed a defense spending bill with a provision that requires the removal of the names from bases. Trump has said he'd veto that must-pass spending bill, but Republican Sen. Chuck Grassley says "we'd probably override the veto." The House Appropriations Committee included a provision that bars the government from making upgrades to military installations that bear Confederate names unless there's a process underway to change the name.

Sen. Mitch McConnell does not want to have this fight. He doesn't want his vulnerable senators having to stand on the floor talking about the Confederacy. The military doesn't want to have this fight, apparently. In addition to Milley's strong statement to Congress about treason, the Pentagon has drafted a policy for a Defense Department-wide ban on the display of the Confederate flag anywhere in a military installation, which the Marine Corps has already done. Given that Black and brown people make up a large chunk of people serving in the armed forces, it's about time.

Milley seemed to want Congress to know he's very well aware of that. "I have many policemen in my family. And I am personally outraged by George Floyd's brutal and senseless killing," he testified. "We as a nation and as a military are still struggling with racism, and we have much work to do. We who wear the cloth of our nation understand that cohesion is a force multiplier; divisiveness leads to defeat."

Lampard wants Chelsea to buy Chilwell, a new goalkeeper and at least one Central defender
Barcelona wants to increase Fati's compensation to 400 million euros
Inter agreed with Manchester United to transfer Sanchez for 15 million euros. It will be announced after the match with Getafe
Alisson: Klopp is a passionate guy, he wants to win and make Liverpool even greater
Borussia Director on the words of Hennessy: it Sounds arrogant. If you have 250 million euros more, it's easy to be carefree
Varan about the match with city: the Outcome of the best games in the Champions League is decided in small episodes. That's why we love it
Pochettino is the main candidate for the post of Barca coach. Setien can be sacked if the club does not win the Champions League
Source https://www.dailykos.com/stories/2020/7/10/1959665/-Joint-Chiefs-head-Confederate-leaders-committed-treason-and-bases-shouldn-t-carry-their-names

Trump campaign returns to the airwaves in early-voting states

4 Simple Ways to Take Control of Your Coronavirus Budget

‘The View’ Heads Into Its Summer Hiatus: When Will ‘The View’ Return?

Telemedicine is Laying the Roadmap for Healthcare's Future

Stunning celebrities over 50 in bikinis and swimsuits

FIFA: Infantino not reckless for taking no notes at AG talks

Even Gerrit Cole is in awe of the Yankees’ potential

The Last California County Without a Coronavirus Case

With loan money gone, restaurants are at mercy of virus

Three months out, the presidential election is still being overshadowed

NJ judge whose son and husband were shot speaks out, calls for better protections

‘Hamilton’ vs. ‘The Old Guard’ vs. ‘Greyhound’ vs. ‘Palm Springs’: Which Movie Was Straight-To-Streaming Champion of July?

No flight required: 10 island escapes you can drive to

Who is Garrett Randall on ‘Yellowstone’? Everything We Know About Jamie’s Birth Father

Clorox becomes ‘it’ brand in world sheltered in place

How TikTok’s Owner Tried, and Failed, to Cross the U.S.-China Divide

Column: Chop down the lynching tree from this California city's logo? Probably not so fast

How to Sculpt Yourself Into a Future-Ready Leader

Growing up in a violent environment is likely to lead to accelerated aging and disease risk, new review of studies shows

Peter Thomas from ‘Real Housewives of Atlanta’ got COVID-19