Johnny Majors, a legendary college football player and coach, has died, the University of Pittsburgh announced Wednesday. He was 85.

Jackie Sherrill, who worked with Majors at Pittsburgh, also confirmed the news of Majors’ passing, according to the Knoxville News-Sentinel.

“John Majors, 1935-2020. He led us to our greatest glory and changed Pitt forever. Thank you, Coach. Rest in peace,” the Pittsburgh Panthers tweeted.

Majors was an All-American running back for the Tennessee Volunteers. He played for the school from 1953 to 1956. He lost the Heisman Trophy in 1956 to Notre Dame’s Paul Hornug.

Many people believe Majors should have won the award because Hornug’s Notre Dame team was 2-8 at the time. It’s the only time a Heisman has been awarded to a player of a team with a losing record.

Majors finished his collegiate career with two SEC MVP awards as well as an All-American selection.

He never played in the NFL. He spent one season with the Canadian Football League’s Montreal Alouettes before turning his attention to coaching.

He got his first head coaching stint with Iowa State. He coached the Cyclones from 1968 to 1972 and recorded a 24-30-1 record. He lost both bowl-game appearances. He then took the Pittsburgh job in 1973. 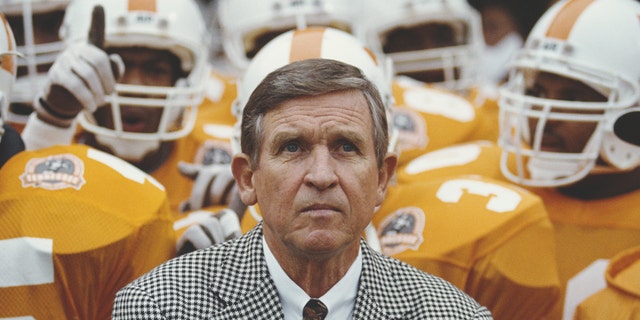 Johnny Majors in a 1990 file photo at the Neyland Stadium in Knoxville, Tenn. (Photo by Rick Stewart/Allsport/Getty Images)

Majors and the Vols won three SEC titles between 1977 and 1992. He was 7-4 in bowl games during that time. He finished his career at Tennessee with a 116-62-8 record before getting a second stint at Pittsburgh. He coached Pittsburgh again from 1993 to 1996 but couldn’t replicate the success he had in the 1970s.

Majors was inducted into the College Football Hall of Fame in 1987.

Jose Mourinho: Financial fair play is dead. It is better to open the doors to the circus, let everyone have fun
🟡 The new Barca uniform is inspired by the 1920s, the club's first Golden period. The checkers were removed, and the replica is not being sold yet because of the marriage
We study the environmental damage caused by flights in football. Leader of the anti-rating of dirty players-2019-suddenly Marquinhos
Pep Guardiola: We didn't expect Liverpool, Tottenham, Arsenal, Chelsea to protect us, but we are able to protect ourselves
Barcelona and PSG want to sign Alaba for free in a year
Lokomotiv – CSKA. Who will win the last top match of the season?
Guardiola on the abolition of the ban are Incredibly happy. All that people were talking about Manchester City, wasn't true
Source https://www.foxnews.com/sports/johnny-majors-legendary-college-football-player-and-coach-dies

Glen Ellyn-area man gets 30 years in prison for murdering Glendale Heights man, who was stomped in head and stabbed in leg

Want to Start an Online Business? These 5 Hiring Tips Can Help You Find Low-Cost Tech Talent.

Possible trade targets for the Red Wings, who have money to be buyers

In Ghost of Tsushima, Honor is Your Greatest Foe

Canada, US poised to extend border restrictions to Aug. 21

Nearly a century later, Tulsa is digging for evidence of mass graves in infamous race massacre

Vijay slashes his remuneration for AR Murugadoss' next

Viola Davis covers Vanity Fair, says her ‘entire life has been a protest’

What Oakland, Macomb sheriffs are saying about ticketing for face mask violations

China and Iran reportedly working on partnership worth billions for Tehran

1st female alleges sexual abuse by U of Michigan doctor