He’s about to take his turn when Mindy Kaling, the comedy writer and actor best known for her work on “The Office” and “The Mindy Project,” comes out of the pop-up photo studio. As McEnroe remembers it, Kaling immediately launched into this soliloquy about how she has this idea for him to be in her new series and she has to talk to him. McEnroe has gotten used to this sort of thing happening every so often.

Usually he never hears from the person again. In this case, Kaling actually followed up, and a year later McEnroe, one the greatest tennis players (and hotheads) of all time, is somehow the narrator for the life and the inner voice of Devi Vishwakumar, a 15-year-old boy-crazy Indian-American girl from the San Fernando Valley in “Never Have I Ever,” Kaling’s Netflix series that made its debut this spring.

“I don’t know why it works,” McEnroe, 61, said last week in a phone interview from his home in Malibu, Calif., where he has been hunkering down since the Covid-19 crisis shuttered much of the American economy in March. “At first people are like, ‘What?’ I’m not the normal voice-over sound.”

But voicing the trials of a nerdy girl obsessed with a hunky swimmer and struggling with the sudden death of her father? That was not a role he saw coming.

Kaling, the daughter of Indian immigrants, has described the Indian love of tennis as an “English Anglophile kind of thing.” In a statement issued through Netflix, Lang Fisher, the show’s executive producer, said that once the creators decided that Devi, the lead character played by Maitreyi Ramakrishnan, was going to have both an inner monologue and a McEnroe-like temper, they figured they might as well see if McEnroe was up for doing the narration.

“We just thought it would be funny,” said Fisher, whose favorite parts of the show are when McEnroe comes off as incredibly invested in the lives of the teenagers.

McEnroe has long had something of a performance bug. A guitarist who is married to the musician Patty Smyth, he long ago began hopping onstage with his favorite music stars. And yet while tennis is usually sports’ ultimate solo act — no caddies, no coaches, no cornermen — he insists he never thought of himself as a performer when he was playing, though other people might have, given the notorious tirades that he still can’t really explain.

“At the end I felt like I was becoming a caricature of myself,” he said of his playing career. “Sometimes I wonder if I was doing it because I was like a cigarette smoker and I couldn’t break the habit.”

He also still doesn’t understand why his opponents were so bothered by his behavior. Looking back, he figures all those insults earned him some payback from the linesmen and umpires who probably helped the players on the other side of the net.

Some of those highlights get another go on “Never Have I Ever,” including the infamous “Answer my question! The question, jerk!” eruption at the Swedish Open in 1984. After confronting the chair umpire, McEnroe smashed several glasses of ice water with a backhand-forehand combination. The umpire penalized him a game. McEnroe later won the match, 1-6, 7-6, 6-2.

“I went over the line,” McEnroe said of his behavior during his career. “I got so frustrated.”

So does Devi, and despite their obvious differences McEnroe relishes the chance to explain what’s going on inside her head and the unforced errors she is making.

“She’s more of a hothead than I was in high school,” McEnroe said of the teenage character, whose lower moments include shattering her bedroom window with a textbook and telling her mother she wishes she had died rather than her father. McEnroe, on the other hand, eventually earned the nickname Superbrat from the British press. 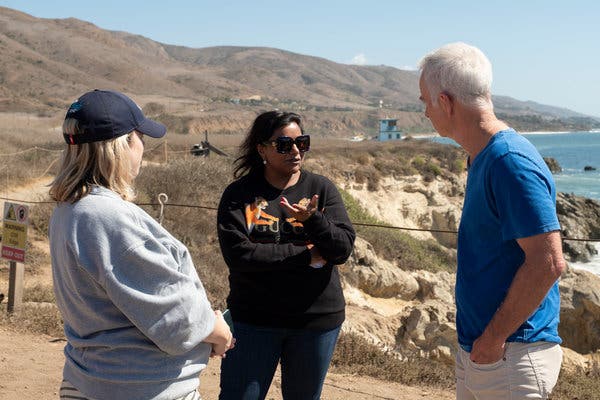 Mindy Kaling, middle, on the set of “Never Have I Ever,” her new series that made its this spring.Credit...Netflix

The question that will soon confront McEnroe and other aging sports stars who later re-enter the public consciousness through a different door is whether the younger generation even knows who they are. Do the young people binge-watching “Never Have I Ever” realize that McEnroe was, in fact, the Roger Federer of the early 1980s, an unmatched shotmaker who redrew the tennis court?

Stan Smith, the former tennis champion, who has achieved a different kind of fame for his eponymous sneaker, has said that upon meeting him people often said they thought he was simply a shoe.

McEnroe said there had been plenty of times when he was out and about and people came up to him to say, “You’re the guy from ‘Mr. Deeds!’” It’s clear they have no idea he ever lifted a tennis racket, he said.

That hasn’t happened yet with “Never Have I Ever” because the show had its premiere in April and he hasn’t been out and about very much lately. When he is in stores, he’s usually wearing a mask.

Eventually that will end, and the requests from a younger set for autographs and the selfies with the guy who understands Devi from inside her brain just might be on the horizon. Ramakrishnan, 18, who plays Devi, has said she had to Google McEnroe to learn who he was. Now she knows he’s not simply a small-screen creation.

“I’m one of the lucky ones,” McEnroe said.

Quique Setien: Barcelona can keep their title chances until the last round. A lot of things happen in football
Klopp confirmed that Henderson is out for the rest of the season due to injury
Pep on Manchester City's appeal to CAS: Confident in the club's arguments that we will be in the Champions League
Ronaldo remembered winning Euro 2016: it was the most important title of my career🏆 🇵 🇹
It is impossible to beat Ramos' penalty (there is only a Subasic save with a violation), but we know how he will hit next time
Real Madrid Director Butragueno: it will be difficult to Beat city. This is a team with fantastic players
Member of the Board of Bavaria: The match against Chelsea will not be easy. Barcelona and Napoli are very experienced teams
Source https://www.nytimes.com/2020/05/26/sports/john-mcenroe-never-have-i-ever.html

The Catholic Church raked in $1.4 billion in coronavirus loans

Sassy 4-year-old explains how not to talk to girls

Who Is Darin Olien on Zac Efron’s ‘Down to Earth’ Netflix Show?

Helen Hunt is mad about this little black bikini

Naya Rivera disappearance: What we know

Is it safe to try on clothes at stores during the coronavirus pandemic?

Nick Cordero's baby kissed video of him on phone

Serbia’s leader not worried about losing power amid protests

Trump Believes Biden Has Been ‘Brainwashed’ by Democrats

‘This Is Not a Boring History of Nagging Spinsters’

Why heat waves and Covid-19 can be a dangerous combination

4 children die when semi slams into car on Indiana highway

How ICE Helped Spread the Coronavirus

Exclusive | Namit Das birthday special: Here's why he got emotional and teary-eyed on his 25th birthday

The Infodemic: Should Airlines Leave the Middle Seat Empty?

With 'Hamilton' now a movie, an old debate reignites about who tells its story