Rare peek in the life of a Diplomat

The Delhi government on Friday, granted sanction to the Delhi Police to prosecute former JNUSU President Kanhaiya Kumar and others in the 2016 sedition case.

The Delhi Police Special Cell on February 19 wrote to the Delhi Home Secretary requesting to "expedite" the process of grant of sanction in the JNU sedition case involving former JNUSU President Kanhaiya Kumar. In a letter written by Deputy Commissioner of Police, Special Cell, Pramod Singh Kushwaha to the Deputy Secretary, Home, he said, "It is therefore requested to expedite the process to accord prosecution sanction under Section 196 CrPC as required for offence under Chapter VI of the IPC i.e. Section 124A IPC."

A Delhi court had asked the Delhi government to file a status report relating to the issue of pendency of sanction in the JNU sedition case to prosecute student leader Kanhaiya Kumar and others.

Additional Chief Metropolitan Magistrate Purshottam Pathak has also directed Delhi Police to send a reminder to the government. "A new government has been formed, send a reminder," the judge said. The court has now kept the matter for hearing on April 3.

On the previous date of hearing, the Arvind Kejriwal government had informed the court that no decision had been taken yet. The reply also states that the file is pending before the Delhi Health Minister Satyendar Jain, who is also handling the Home portfolio. The public prosecutor has filed a reply by submitting a letter in the court.

Taking to Twitter, Kanhaiya Kumar wrote, "The need for fast track courts and speedy action in the sedition case is so that the country can know how the sedition law has been misused in this entire case for political gains and to divert people from their basic issues."

"Thank you for granting permission for the Sedition Case to the Government of Delhi. Delhi Police and government officials are urged to take this case seriously, speedy trial in the fast track court and ensure justice in the court of law instead of 'your court' with TV. Satyameva Jayate." 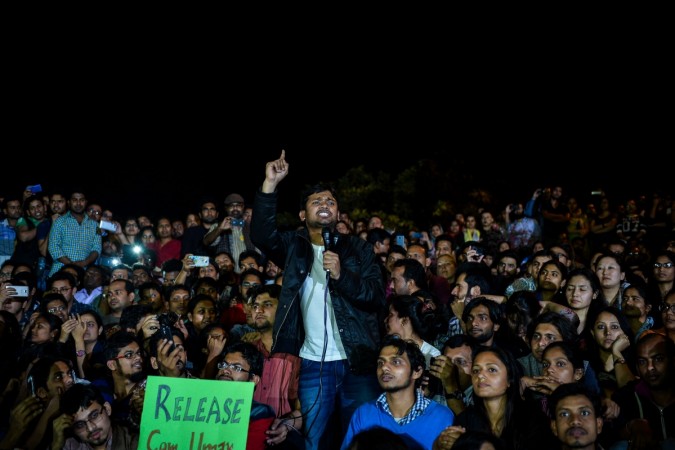 On February 9, 2016, "anti-national" slogans were allegedly raised at the Jawaharlal Nehru University campus during a programme called to protest against the death sentence handed out to Afzal Guru, a convict in the 2002 Parliament attack.

The charge sheet says the Regional Forensic Science Laboratory (RFSL) retrieved the SMS sent by Umar Khalid to Kanhaiya Kumar to arrive at Sabarmati Dhaba, JNU, as their permission (to hold the protest) had been cancelled by the University administration.

The final pages of the charge sheet also confirm the presence of Kashmiri students during the protest and that they were in contact with Umar Khalid.

When Tamannaah rubbed Nayanthara the wrong way and the reason, a Karthi-starrer

Dr. Birx praises Trump, says deciding to use hydroxychloroquine 'up to the physician and the patient'

Will the coronavirus pandemic impact the content delivery cycle for streaming giants? Experts weight in

Trump angrily lashes out when confronted with critiques of virus response

MLB discussing coronavirus plan for all teams to play in Arizona

Ew David, These Are Some of Schitt's Creek's Best Quotes

A Tiger Has Coronavirus. Should You Worry About Your Pets?

Tucker Carlson on coronavirus lockdowns: 'There has to be a more balanced course than the one we are on'

Sam Gores To Paradigm Staff: $1.1M Fund For Laid Off Employees, New Interim Funding Secured & No Salary For Gores Through 2020

WI Supreme Court site says it's closed due to COVID-19, just above order saying election must go on

Cardinal George Pell To Be Freed After Court Overturns His Conviction

How should you wash your face mask to protect against coronavirus?

Dr. Marlow Hernandez: Using hydroxychloroquine 'should be between a patient and his or her doctor'

All Kentucky Derby bets are off for now

A woman accused a NASA officer of hacking her bank account from space. Prosecutors say she lied.

Amitabh Bachchan on bankruptcy: 'Creditors used to land at our door, abusing and threatening' (Throwback)

Mets’ Steven Matz built foundation for tragedies like this

Pentagon sending some 1,500 medical personnel to NYC to battle coronavirus

Gauri Khan wanted to leave Shah Rukh Khan: 'All the starwives are running away, myself included' (Throwback)

Granddaughter was sick, so Dr. Birx stayed away