Early on Monday, the police in Hong Kong arrested Jimmy Lai, founder of the popular tabloid Apple Daily, on charges of collusion with a foreign country, one of the vaguely defined crimes under the anti-sedition law adopted this spring by Beijing. It was the latest and clearest signal that China intends to make full use of that sweeping new legislation to stifle free expression and undermine Hong Kong’s pro-democracy movement.

Mr. Lai, an ardent critic of the Chinese Communist Party who had used his wealth to finance pro-democracy activities, knew it was coming. In an Op-Ed in The Times in May, shortly before the government in Beijing announced its intention to pass the law, he wrote: “I have feared that one day the Chinese Communist Party would grow tired not only of Hong Kong’s free press but also of its free people. That day has come.”

It has been a sad sight for all who had watched hundreds of thousands of Hong Kong’s people bravely take to the streets in the months before the coronavirus pandemic, in addition to several other protests in years past, to protect the modest freedoms they were promised when Britain turned its former colony over to China in 1997. Beijing started trying to undermine the “one country, two systems” principle from the get-go, but the campaign to quash the opposition has escalated sharply under the unyielding, authoritarian rule of President Xi Jinping.

Since the new law took effect at 11 p.m. on June 30, just before the anniversary of the city’s handover from British rule, students have been arrested for social media posts; warrants have been issued for pro-democracy activists abroad; a dozen pro-democracy politicians have been disqualified from running in legislative elections; and the elections themselves were postponed for a year. The Times announced last month that it was moving part of its Hong Kong operations to Seoul, South Korea.

Mr. Lai’s arrest was the most significant and aggressive action yet under the law. He was seized at his home in the early morning and later led handcuffed through the newsroom of Apple Daily while nearly 200 police officers rifled through desks and amassed bales of documents to take away — all duly recorded by the paper’s infuriated staff. The police also arrested Mr. Lai’s two sons and four executives of his company, Next Digital. 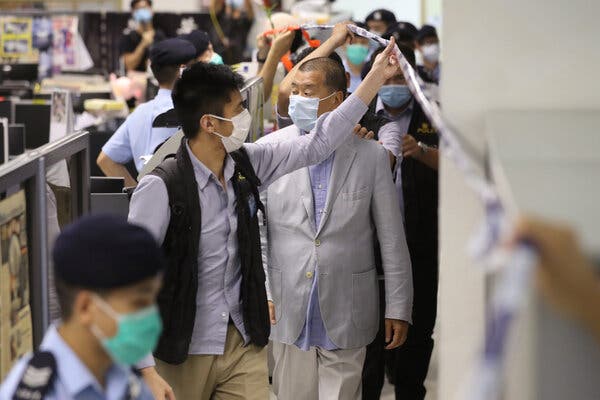 Mr. Lai, flanked by police officers, during a search at the headquarters of his newspaper, Apple Daily.Credit...Getty Images

What will happen next to the 71-year-old tycoon, a native of mainland China who made his fortune in apparel, is hard to predict. The anti-sedition law is overarching both in the definition of crimes and in its scope, with penalties as severe as life in prison for crimes such as secession, subversion, terrorism and collusion with foreign forces. It applies to Hong Kong residents and nonresidents alike, as well as Hong Kongers living abroad. And it allows for certain cases to be tried behind closed doors in mainland China, where courts are obedient to the ruling party.

In the early years of Hong Kong’s semiautonomous status, the prevailing presumption was that China would not dare to crack down too aggressively for fear of risking the link to Western finance that the bustling enclave provided. But as China has grown in economic might, the financial role of Hong Kong has decreased, and Mr. Xi has evidently concluded that he can withstand whatever outrage or sanctions China’s behavior provokes in the West. Hong Kong has been only one front on which he has flexed his muscles; the others include expansive claims to the South China Sea, repression of Uighurs in the Xinjiang region and a readiness to wage a tariff war with the Trump administration.

The introduction of the national security law for Hong Kong prompted the Trump administration to terminate the special status Hong Kong had enjoyed as a semiautonomous region, to impose visa restrictions on those in Beijing responsible for the crackdown, and to end exports of military equipment and dual-use technology through Hong Kong.

On Friday, after pro-democracy candidates were disqualified from running for the legislative council, the Trump administration went further and ordered sanctions against 11 Hong Kong officials, including Carrie Lam, the chief executive, effectively lumping them together with Communist officials on the mainland. China promptly retaliated on Monday by sanctioning 11 Americans, including Senators Marco Rubio and Ted Cruz. The United States also joined with Britain, Australia, Canada and New Zealand in a sharp statement charging that disqualifying candidates and postponing elections “undermined the democratic process that has been fundamental to Hong Kong’s stability and prosperity.”

It is dubious that such sanctions and statements can have much effect, given that the officials sanctioned are not likely to travel in one or the other direction due to the pandemic and probably have few assets that the other side can freeze. Given Mr. Xi’s mind-set and China’s growing economic and military might, it is hard to imagine what actions the United States or its allies could do to help the brave people of Hong Kong.

To them, “two systems” always meant more than a bit of say in local governance: It meant they could continue to enjoy free speech and impartial courts, and freedom from fear of official oppression. “Two systems,” to the pro-democracy forces, meant a free one in Hong Kong and an unfree one on the mainland.

All that has long been in peril, no more so than now, and it is terribly sad to see people who had done so much to protect their freedoms fall further challenged again by a system that regards freedom as sedition, free speech as subversion and meeting with foreigners as collusion.

For now there is not much more the world can do. Yet Mr. Xi is deluded if he thinks that turning the rule of law into a rule by law will erase the longing for elemental freedoms that is second nature to Hong Kong. It is incumbent on the United States and its allies, and on all people who cherish freedom, to make abundantly clear to Beijing at every chance that in Hong Kong, as in Xinjiang and the South China Sea, Mr. Xi’s misguided aggression is turning his nation from a rising star into a pariah.

The APL referees will be asked to soften the hand play. But the League cannot deviate from the rules
Lyon values Aouar over 40 million euros. Arsenal offered 35
Tottenham are not selling Mourinho's merch - because Chelsea still own the trademark rights. But it didn't stop Manchester United
Shomurodov is close to moving from Rostov to Genoa for 8 million euros (Sport Italia)
Pobegalov about 12 cases of covid in Shinnik: I hope we can start training by October 4
Kulchiy is likely to become an acting coach of Dynamo. They want to keep Novikov in the club's system
Due to covid, the Premier League season may be considered prematurely completed if the 2/3 and 3/4 rounds are completed
Source https://www.nytimes.com/2020/08/10/opinion/jimmy-lai-hong-kong.html