I am trying to think of when I first realized we’d all run smack into a wall.

Was it two weeks ago, when a friend, ordinarily a paragon of wifely discretion, started a phone conversation with a boffo rant about her husband?

Was it when I looked at my own spouse — one week later, this probably was — and calmly told him that each and every one of my problems was his fault?

Or maybe it was when I was scrolling through Twitter and saw a tweet from the author Amanda Stern, single and living in Brooklyn, who noted it had been 137 days since she’d given or received a hug? “Hello, I am depressed” were its last four words.

Whatever this is, it is real — and quantifiable, and extends far beyond my own meager solar system of colleagues and pals and dearly beloveds. Call it pandemic fatigue; call it the summer poop-out; call it whatever you wish. Any label, at this point, would probably be too trivializing, belying what is in fact a far deeper problem. We are not, as a nation, all right.

Let’s start with the numbers. According to the National Center for Health Statistics, roughly one in 12 American adults reported symptoms of an anxiety disorder at this time last year; now it’s more than one in three. Last week, the Kaiser Family Foundation released a tracking poll showing that for the first time, a majority of American adults — 53 percent — believes that the pandemic is taking a toll on their mental health.

This number climbs to 68 percent if you look solely at African-Americans. The disproportionate toll the pandemic has taken on Black lives and livelihoods — made possible by centuries of structural disparities, compounded by the corrosive psychological effect of everyday racism — is appearing, starkly, in our mental health data.

“Even during so-called better times, Black adults are more likely to report persistent symptoms of emotional distress,” Hope Hill, a clinical psychologist and associate professor in the psychology department at Howard University, told me. “So when I hear about that fifteen-point difference, it’s upsetting, but it’s not surprising, given the impact of long-term, race-based trauma and inequality.”

But even the luckiest among us haven’t been spared. According to the Kaiser Family Foundation, 36 percent of Americans report that coronavirus-related worry is interfering with their sleep. Eighteen percent say they’re more easily losing their tempers. Thirty-two percent say it has made them over- or under-eat.

I’m solidly in the former category. Turns out the extra ten extra pounds around my middle have moved in and unpacked, though I’d initially hoped they were on a month-to-month lease.

So. How to account for this national slide into a sulfurous pit of distress?

The most obvious answer is that the coronavirus is still claiming hundreds of lives a day in the United States, whipping its way through the South and heaving to the surface once again in the West. This is true, and on its face is awful enough. But I suspect it’s more than that.

America’s prodigious infection rates are also a testament to our own national failure — and therefore a source of existential ghastliness, of sheer perversity: Why on earth were so many of us sacrificing so much in these past four and a half months — our livelihoods, our social connections, our safety, our children’s schooling, our attendance at birthdays and anniversaries and funerals — if it all came to naught? At this point, weren’t we expecting some form of relief, a resumption of something like life? 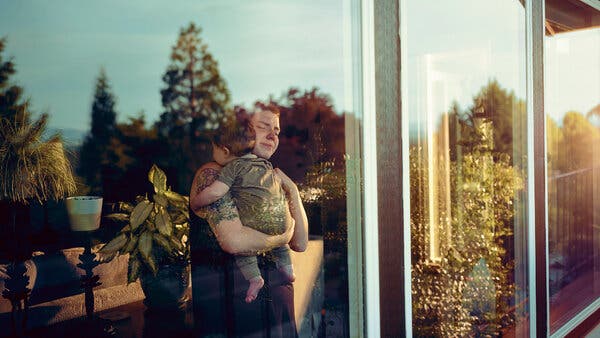 Brianne Coleman with her baby in Ridgefield, Wash. She said the shelter-in-place order has “made me question if I really have what it takes to be a single mom.”Credit...Leah Nash

“People often think of trauma as a discrete event — a fire, getting mugged,” said Daphne de Marneffe, author of an excellent book about marriage called “The Rough Patch” and one of the most astute psychologists I know. “But what it’s really about is helplessness, about being on the receiving end of forces you can’t control. Which is what we have now. It’s like we’re in an endless car ride with a drunk at the wheel. No one knows when the pain will stop.”

Nor, I would add, do any of us know what life will look like once this pandemic has truly subsided. Will the economy remain in tatters? (One word for you: inflation.) Will our city centers be whistling, broken conch shells, gritty and empty at their cores? (Lord, I hope not.) Will President Trump be re-elected, transforming democracy as we’ve known it into an eerie photonegative of itself?

In her own therapeutic practice, de Marneffe has noticed that families with pre-existing tensions and frailties are doing much worse: The pandemic has only provided more opportunities for struggling couples to communicate poorly, roll their eyes and project rotten motives onto one another. (“And marriage is already a hotbed of scapegoating,” she noted.) Parents who were barely limping along, praying for school to start, are now brimming with despair and ruing their lack of imagination: How are they supposed to make it through another semester of remote schooling?

“Those of us who are average parents rely on structure,” she told me. “We need school.”

I recently thumbed through “The Plague,” to see if Albert Camus had intuited anything about the rhythms of human suffering in conditions of fear, disease and constraint. Naturally, he had. It was on April 16 that Dr. Rieux first felt the squish of a dead rat beneath his feet on his landing; it was in mid-August that the plague “had swallowed up everything and everyone,” with the prevailing emotion being “the sense of exile and of deprivation, with all the crosscurrents of revolt and fear set up by these.” Those returning from quarantine started setting fire to their homes, convinced the plague had settled into their walls.

Camus sensed, in other words, that the four-month mark got pretty freaky in Oran. That’s more or less what happened here. If only we knew how it ended.

Barcelona will issue a transfer for desta for 20+5 million euros at the beginning of next week
Nigmatullin about Mandzukic's transfer to Loko: if it had happened 5 years ago, I would have treated it well. They often come to us to finish playing
Petr Cech on Mendy: A versatile goalkeeper. Should increase competition at Chelsea
Bayern Munich V care Cuisance. The midfielder claimed Leeds and Marseille
Lyon can buy A package from Milan if they sell Rennes-Adelaide to Rennes
Simeone recovered from covid and returned to work with Atletico. Suarez will make his debut for the club on Sunday
Lampard on Politice and Ziese: We hope that in a couple of weeks they will be in optimal shape
Source https://www.nytimes.com/2020/08/05/opinion/coronavirus-mental-illness-depression.html