JERUSALEM — As Israelis prepare to celebrate the holiest days on the Jewish calendar under a fresh lockdown, organizing prayer services is proving to be more of a mathematical brainteaser than a spiritual exercise.

Rabbis are having to arrange worshipers into clusters of 20 to 50, separated by dividers, determining the number and size of the groups based on complex calculations involving local infection rates, and how many entrances and square feet their synagogues have. Masks will be required, and many seats will have to remain empty.

With the coronavirus rampaging again, Israel will become one of the few places in the world to go into a second lockdown, which will take effect on Friday, on the eve of Rosh Hashana, the Jewish New Year. The government has issued a list of restrictions — along with a plethora of exemptions that many criticize as a formula for confusion and noncompliance.

The atmosphere in the run-up to the holidays was more despairing than joyous.

“These are not the holidays we were hoping for,” said Rabbi Kenneth Brander, the president of Ohr Torah Stone, an Israel-based Jewish education group with emissaries around the world. “The fragility of life is upon us, but I see people rising to the occasion.”

The three-week national lockdown was timed to coincide with the Rosh Hashana and Yom Kippur holy days and the festival of Sukkot, in the hope of causing less economic damage because business slows down in any case around the holidays. It was also aimed at preventing large family meals that could become petri dishes for the virus.

For many Jews, the loss will be emotional rather than economic, taking from them gatherings and rituals they have always relied on to tighten family and community bonds.

Israel successfully limited the spread of the virus in the spring, but recently its infection rate has spiraled into one of the world’s worst. The country has had more than 300 confirmed new cases per 100,000 people over the last week — more than double the rate in Spain, the hardest-hit European country, and quadruple that of the United States.

Schools closed on Thursday, just two weeks after they had reopened. Starting Friday, people will be required, in general, to stay within 1,000 meters — about 1,100 yards — of home.

But the limit on movement is peppered with so many exceptions — to work, exercise, demonstrate, buy essentials and fulfill a variety of religious obligations — that many Israelis question the logic and motivation behind them.

The dizzying policy shifts continued on Thursday evening. With health officials warning that the relatively loose lockdown was unlikely to dramatically cut down infection rates, Prime Minister Benjamin Netanyahu said there might be “no choice but to be more rigid with the regulations.” 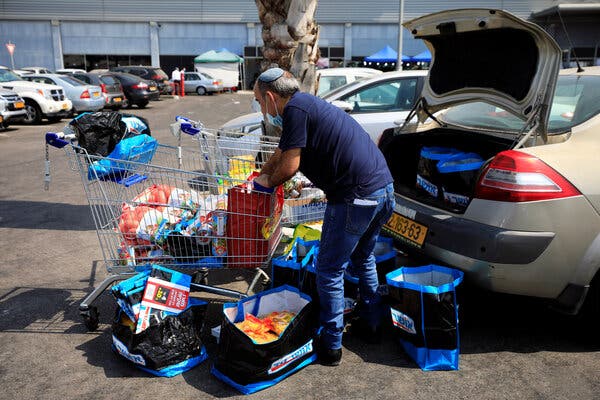 Preparing for a locked-down Jewish New Year, in Ashdod, Israel, on Wednesday.Credit...Amir Cohen/Reuters

At the same time, a parliamentary committee had argued for loosening the restrictions on movement, doubling the radius from 500 meters to 1,000. The cabinet approved that change overnight between Thursday and Friday.

“All the zigzagging confuses people,” said Karin Azizian, 45, a homemaker from Emunim, a village in central Israel. “They don’t have any belief in the government.”

Even before the government had issued its instructions this week, the Jerusalem Great Synagogue, where prime ministers and presidents have prayed, announced that it was closing its doors over the High Holy Days for the first time in its more than half-century history.

“Our decision reflects our overriding concern to protect every congregant and their families at a time of great uncertainty and changing Government guidelines,” the board of trustees wrote in a letter to congregants.

“I have tears in my eyes,” Zalli Jaffe, the president of the Great Synagogue, said in an interview. The synagogue operated without interruption through all Israel’s wars, he said, recalling how, in 1991, he ran from home to open for morning prayers when the all-clear sounded after an Iraqi missile attack.

But the government policy was not very reassuring, he said, asking, “Is it based on science or politics or economics?”

Many nonobservant Jews attend synagogue during Rosh Hashana and Yom Kippur, the Day of Atonement and fasting. But the lockdown exemptions have caused resentment among secular Israelis because many of them are seen as catering to the religiously observant — the result of pressure from religious parties in the governing coalition.

Jewish women will be allowed to venture beyond 1,000 meters to dip in a ritual bath, but swimming pools will be closed. Observant Jews will be able to travel to buy supplies needed to observe Sukkot — citron fruit and other plants as well as materials to build a temporary shelter. Unlike synagogues, cultural venues, museums, gyms and hotels will be shut.

“Many secular Israelis have the deep-set and well-argued feeling that this lockdown is a ‘lockdown for the secular,’” wrote Shoshana Chen, a commentator, in a column on Ynet.

Among the provisions that people have questioned is one allowing Israelis to fly to Greece and a couple of other countries, but not to Eilat, Israel’s Red Sea resort.

The head of an Israeli hotel chain said he would change the town’s name to the more Greek sounding “Eilatos” if it would help, as the kitchen staff were forced to throw out food they had already prepared for the holidays.

Jerusalem’s Great Synagogue will be closed for Jewish New Year for the first time in history.Credit...Menahem Kahana/Agence France-Presse — Getty Images

Public confidence in government decision-making began to erode on Passover, during the spring lockdown, when Mr. Netanyahu and the country’s president, Reuven Rivlin, broke the rules by hosting family members from outside their immediate household.

Mr. Rivlin apologized, again, for that slip-up in an emotional, televised speech to the nation on Wednesday night and said he was also atoning for the leadership’s failure in containing the pandemic.

“You trusted us and we let you down,” he said. “I want to say to the government of Israel — its leaders, ministers and advisers: The trust of the people is beyond value. We must do everything to restore personal, medical and economic confidence to our fellow citizens."

In an effort to allow more people to experience the holiday spirit, some Jewish organizations have been working on creative solutions.

The Tzohar Rabbinical Organization and Ohr Torah Stone have expanded the “Shofar in the Park” project they started several years ago, which brings the ritual blast of a ram’s horn into the public sphere. Now they are also taking it inside residential buildings where people will be under lockdown.

In addition, Ohr Torah Stone has produced an abridged, online version of the “machzor,” the prayer book for the holidays, to allow for shorter, safer services whether they are held indoors or outdoors, in smaller communal settings of up to 20 people. Thousands of copies have been downloaded for mass printing and distribution.

“Jewish law prioritizes health and safety,” Rabbi Brander said. “It gives us the opportunity to maneuver in times of challenges.”

Merav Atetgi, 44, a teacher from Nitzan, a small community near the southern end of Israel’s Mediterranean shore, took two of her five sons to a beach before the new restrictions took hold.

“It’s a suffocating feeling,” she said of the looming lockdown, “but there is no choice.”

A young couple, Gur Lavi, 24, and Orian Mazar, 23, who live in different towns in central Israel, went to Jerusalem for a day out together before spending at least the next three weeks apart, stuck in their families’ homes.

Mamilla, an outdoor shopping mall near Jerusalem’s Old City, would normally teem with foreign tourists. But the exclusive gift stores and boutiques were almost deserted in the days before the holidays began.

Yet a few Israelis were still out buying holiday clothes. A popular clothing store chain was still advertising “back-to-school” offers.

Shimi Elimelekh, a manager of one of the chain’s stores said, “unlike Passover, when everyone sat in their pajamas, this time people want to dress up even for their own family, to feel the festival.”

Eto'o accused France Football of disrespect: I spent 1-2 seasons on the right, and the center forward was 25 years old
Barcelona are concerned about the shape of the Target. The club believes that he did not work enough on vacation
Laporte was supported by van Dyck: Sorry, bro. No joy, even though we are rivals
Lautaro Martinez: Messi is the best in the world. He is always one step ahead of the rest
The Atletico stadium was painted pink as part of the campaign to fight breast cancer
Frank Lampard: nothing comes easy in the Champions League. This is a great platform to learn new things
Ronaldo was not included in the Juve bid for the match against Dynamo Kyiv
Source https://www.nytimes.com/2020/09/18/world/middleeast/israel-lockdown-high-holidays.html

Australia to join India, US, Japan in large naval exercises

Trump closes his campaign by insulting Fauci for telling the truth

Adam Gase is ‘doing everything he can’ to salvage Jets season

What’s Really Going on With Hunter Biden’s Hard Drive? Here’s Everything We Know.