CONWAY, S.C. — The first mention of the coronavirus pandemic was a joke.

A master of ceremonies was explaining to a crowd of more than 100 people why the keynote speakers — home-state Senators Lindsey Graham and Tim Scott — were running a bit late.

“You have to understand, they haven’t got to do any politicking for a while,” said the M.C., Robert Rabon of the Horry County Republican Party. “They’re like a kid in a candy store — they’re going wild!”

And with that passing mention, South Carolina Republicans returned to the normal rhythm of the campaign trail, coronavirus all the same.

The outdoor gathering here on Thursday was a send-off event for Cleo Steele, a longtime Republican Party operative in Horry County, who is retiring to Ohio. Speakers shared the same microphone. Local and state political candidates greeted voters with handshakes and squeezed tight for pictures. Of all the people gathered outside the county Republican office — many of them senior citizens — fewer than a dozen wore masks.

“Social distancing guidelines are recommended,” the invitation had said. “Hand sanitizer and face masks will be available.” In reality, according to interviews with more than a dozen attendees, the event was an active rejection of behavior that the hyper-conservative crowd has come to associate with liberal enemies in recent months — wearing masks and gloves, staying six feet away from other people, avoiding physical touch.

To treat the coronavirus as something to be feared, they said, was a political act incongruous with their values. 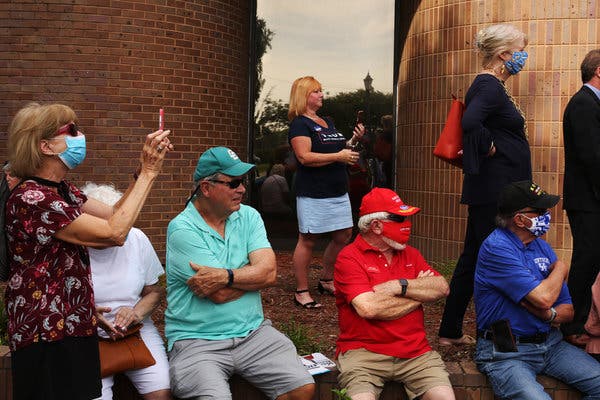 Only a handful of people wore masks at the event.Credit...Travis Dove for The New York Times

Dwayne “Duke” Buckner, who is challenging Mr. Graham in the Republican Senate primary next month and came to the event to meet voters, said he had recently stopped adhering to public health guidelines, which he described as overly burdensome.

“You can quote me on this,” Mr. Buckner said. “When the good Lord calls you home, a mask ain’t going to stop it.”

August Savello, 49, said he followed Dr. Steven Hotze, a Republican activist who has published videos such as “Coronavirus Mass Hysteria,” and preferred to do his own research rather than listening to state and federal public health officials like Dr. Anthony S. Fauci.

That the event was held the same week that the pandemic’s death toll in the United States crossed 100,000 reflected the different realities of the virus along political, racial and geographic lines. In densely populated urban centers, more likely to be inhabited by Democrats and racial minorities, high infection rates have completely upended daily life and made social distancing largely nonnegotiable. Here in coastal Horry County, which includes Myrtle Beach and is overwhelmingly Republican, news of relaxed restrictions on social gatherings was treated with relief.

State data shows that Horry County has nearly 400 confirmed cases of coronavirus, below the state’s per capita average. Black South Carolinians, meanwhile, have contracted more than half of the state’s total cases, though they make up less than 30 percent of the state’s population. The crowd at the event was almost all white.

Michael LaPierre, a right-wing Senate candidate who came to the event with dozens of supporters who pestered Mr. Graham, said he had no reservations about extending handshakes and taking pictures, or as he put it, “pressing flesh and kissing babies.”

“We wipe our hands and take precautions,” said Mr. LaPierre, who is 70 and lives with his 99-year-old mother-in-law. “But I spent 28 months in Vietnam and crashed six times in a helicopter. I’m going to die when I’m going to die.”

During the program, Ms. Steele, seated in a wheelchair, was presented with commendations from Mr. Graham and Mr. Scott, as well as awards from local and state Republicans. Speakers posed for pictures with the honoree, hugging her close as they applauded her years of service. Aides to Mr. Graham and Mr. Scott wore masks. The senators did not.

Behind the outdoor podium, a full-fledged marketplace of pro-Trump merchandise attracted a gaggle of customers. In the center sat a bronze bust of the president, which some rubbed for luck and posed with for pictures.

At the program’s conclusion, Mr. Rabon called up more than a dozen state and local candidates, who introduced themselves to the audience, shared a portion of their political platform, and returned to the crowd for meet-and-greets.

He coughed into the microphone, and passed it to the first speaker.

Agent de Bruyne: Kevin is not thinking about leaving Manchester City. 90% of news is nonsense
Ronaldo is the king of alcohol. I was out with Vieri, begging for beer from the media, and I figured out how to drink in front of the coach
MLS is back: almost 9 minutes of protest against racism and a giant virtual adidas logo in the center of the field
Solskjaer on MATIC: I'm Glad he stayed. We need experience in a team with children who run around
Germany manager Bierhoff: Havertz is a player for Real Madrid
Buffon's agent: Gianluigi should become a coach. He can lead Juve
Barcelona won the court against Santos in the Neymar case. The Brazilians demanded more than 61 million euros
Source https://www.nytimes.com/2020/05/29/us/politics/south-carolina-coronavirus-republicans.html

What to do if you have COVID-19 or its symptoms in Bengaluru: Guide

Being Bored Is the Best Thing That Can Happen to You

Walmart is giving Amazon Prime a serious run for its money

Is evangelical support for Trump a contradiction?