An alleged attack on an Indiana civil rights activist, which he described as “attempted lynching,” is now being investigated by the FBI as a hate crime, his attorney said.

Katharine Liell, who is representing Vauhxx Booker, made the announcement as she called for arrests in relation to the events that she said unfolded at Monroe Lake, outside of Bloomington, over the Fourth of July weekend.

“We are aware of the incident in Monroe County this past weekend and are monitoring the situation,” the FBI said in a statement to Fox59. 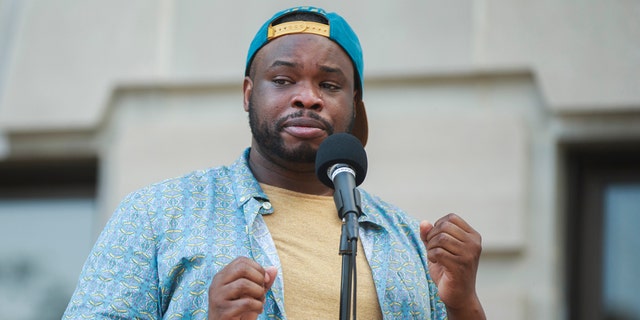 Vauhxx Booker speaks during a community gathering to fight against racism. (SOPA Images/LightRocket via Getty Images)

Booker, a member of the Monroe County Human Rights Commission, is claiming he was “almost the victim of an attempted lynching.”

“On July 4th evening others and me were victims of what I would describe as a hate crime,” Booker wrote in a Facebook post describing the ordeal. “I was attacked by five white men (with confederate flags) who literally threatened to lynch me in front of numerous witnesses.”

Booker said the alleged attack happened after one of the men claimed he was trespassing on private property near the lake, where Booker had gone to view a lunar eclipse.

“The attackers... stated to the members of their party several times to, ‘get a noose’, amongst some other choice slurs,” he wrote. “With me still pinned underneath them they kept telling onlookers to leave the ‘boy’ and that everyone else (all white) could go.”

The alleged incident left him with a minor concussion and some bruises, Booker said.

As of Thursday morning no arrests had been made in the case, which is still being investigated.

Indiana Gov. Eric Holcomb said Wednesday that the Department of Natural Resources (DNR) officers that responded to the scene acted according to protocols.

“I’m proud of the DNR and the way they’ve conducted themselves,” Holcomb said. “They’ve done everything right, by the book. It’ll be handled correctly and was from the very outset.”

The DNR hasn’t said whether it knows the names of the men who allegedly were involved. It has also withheld the names of the officers who responded and details about what happened when they arrived.

Holcomb said a video clip posted online purportedly showing the alleged incident “was beyond disturbing" and that it's critical the DNR finishes its investigation “sooner rather than later.” He added that the agency's report is nearly done.

But Liell, in an interview with The Associated Press, argued that the governor can and should do more.

“The governor has complete control over DNR," Liell said. "This is a chance for him to use this as an example to rethink the role of police in our society.”

Law enforcement officers with the DNR officers were too slow in their response to reports of the attack and Liell said the time it's taking to put an incident report together is “ridiculous." She also said the officers' failure to make arrests at the scene warrants further investigation from other law enforcement agencies.

“We are still flabbergasted as to why there were no arrests made that night — and still no arrests right now,” Liell said. “These are dangerous men still free in our community who we have serious concerns about.”

State Sen. Mark Stoops, a Bloomington Democrat, said he was “horrified by the racist attack.” He called on Holcomb to suspend and investigate the DNR officers who responded to the scene for failing to make any arrests.

“This is not just an issue of violence,” Stoops said in a statement Monday, “this is clearly a hate crime and must be treated as such.”

A crowd also gathered in Bloomington Monday night to protest the lack of arrests. However, following that demonstration, two of the protesters were seen on video being hit by a car.

Thomas Tuchel: If both legs were intact, you could have seen my 40-meter sprint
PSG saved Tuchel's pet: Choupo-moting got everyone for free, managed not to score from a centimetre, and now pulled Paris to the semi-finals of the Champions League
Gian Piero Gasperini: The worst part is that we were so close. I can only thank the guys
Neymar was the player of the match Atalanta-PSG. He gave an assist
ПС PSG suffered through the entire quarter-final and turned it over in 149 seconds. Lifted the Italian curse and went so far in the Champions League for the first time in 25 years
ПС PSG's pain was transformed into happiness: in three minutes, the suffering stars turned into celebrating kings
The club from Italy won't win the Champions League for the 10th year in a row. This is an anti-record
Source https://www.foxnews.com/us/indiana-attempted-lynching-investigated-by-fbi?utm_source=feedburner&utm_medium=feed&utm_campaign=Feed%3A+foxnews%2Fnational+%28Internal+-+US+Latest+-+Text%29