Big questions loomed Friday over the death of Kurt Andras Reinhold, who was fatally shot by Orange County sheriff’s deputies in the beachfront town of San Clemente.

How did this well-educated, church-going Black man, who coached youth soccer and had two children of his own, end up living on the streets of South Orange County? What pushed him into mental illness and homelessness? Why did two deputies, part of a specialized detail to help people who are homeless, confront him Wednesday?

And then there’s the doubt that nagged at neighbors Laura Engeman and Rani Craig as they headed Thursday to an impromptu memorial near the spot where Reinhold was killed: “How did a routine interaction from a homeless outreach effort escalate into a gun incident?” Engeman asked. 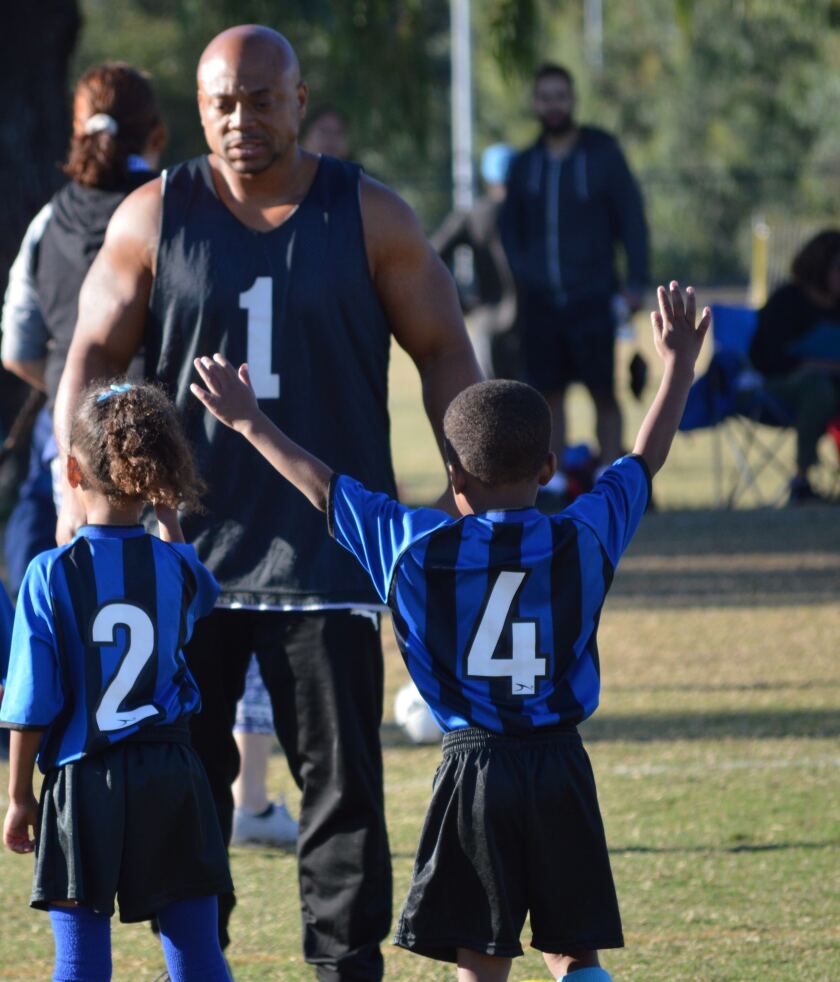 Reinhold’s name has been added to the long list of Black men and women killed by police under questionable circumstances across the country: George Floyd, Breonna Taylor, Brendon Glenn, Michael Brown and many others.

Those deaths have fueled a summer of coast-to-coast protests against systemic racism. And they have spurred calls for police reform, including proposals to strip police of the routine responsibility of dealing with people who are mentally ill or homeless.

The 42-year-old Reinhold was not the first homeless man to die at the hands of law enforcement officers in Orange County. But his death underscores the inherent tension between police and homeless people, which has increased along with the double-digit growth in the homeless population in Southern California over the past four years.

“We continue to see police killings of homeless people because we have not fundamentally changed the way we treat homelessness in this country,” said Eric Tars, legal director of the National Homelessness Law Center. “In spite of all the calls to divest law enforcement of its role in managing homeless people and to invest in housing, that hasn’t caused the change that we need.” 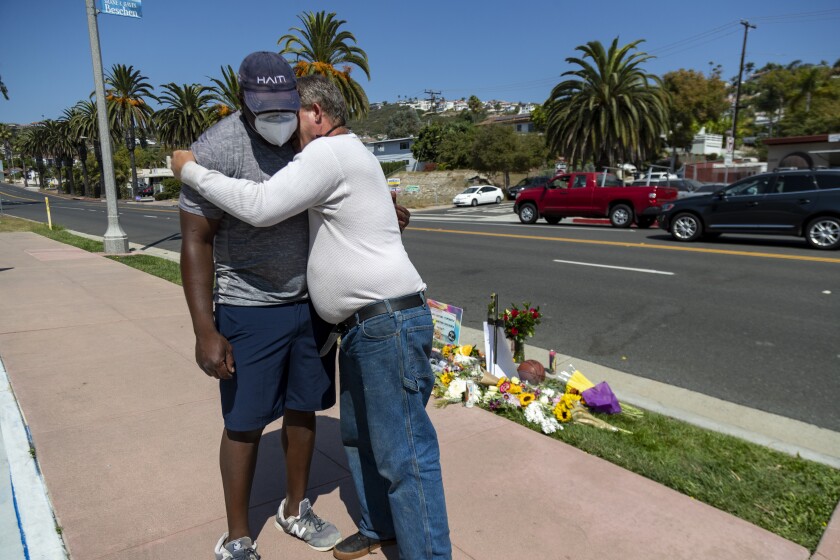 That issue is underscored in the circumstances of Reinhold’s death, which was captured on a cellphone video.

The recording shows two deputies — who have been trained in techniques used to de-escalate dangerous situations — confronting Reinhold at about 1:15 p.m. Wednesday in the middle of El Camino Real, not far from Hotel Miramar.

The deputies tell Reinhold he is walking in the middle of the street.

“Go sit down,” one deputy tells him. But the agitated man ignores him and tries to walk past them. The deputies wrestle him to the ground. Reinhold wriggles as they try to restrain his arms.

Two shots ring out. There is not enough detail in the video to tell whether Reinhold grabbed the weapon. Orange County sheriff’s deputies do not wear body cameras.

“Oh, my God,” says the bystander who is recording the altercation.

The deputies involved in the shooting have not been identified by the Orange County Sheriff’s Department. However, the department’s San Clemente Police Services Facebook page shows multiple images of the two homeless services deputies assigned to the city. In a video on the site, they reunite a man with his mother, who has dementia and wandered away from her Inland Empire home.

Department spokeswoman Carrie Braun said she did not know what caused the deputies to approach Reinhold, who had been in San Clemente for about a month before he was shot to death. During that time, Braun said, the deputies had spoken to him at least twice, in part about trespassing.

Reinhold had never been cited or arrested in San Clemente, Braun said. None of the interactions had been combative.

The Wednesday shooting echoes the 2015 death of a Black man named Charly “Africa” Keunang, who was mentally ill and homeless. Keunang was shot to death by Los Angeles Police Department officers in broad daylight on skid row.

In that case, one officer, a rookie, shouted that the homeless man had his gun. Keunang allegedly grabbed it as the officer knelt on his chest and pummeled him. The Los Angeles County district attorney declined to prosecute the two officers, saying the dead man had had his fingers around the weapon.

Pasadena civil rights attorney Dan Stormer represented Keunang’s family members during a civil trial in which a jury found the two officers liable in the shooting. Stormer’s firm reached a $1.95-million settlement with the city on behalf of the family.

Los Angeles police have since adopted a de-escalation policy requiring officers to defuse tension before using their guns. However, the LAPD’s annual use-of-force review shows that, while the number of shootings by officers has gone down dramatically, the number of homeless people who are shot by officers has risen every year since 2016.

Of the 26 suspects shot by LAPD officers in 2019, six — nearly a quarter — were determined to be homeless people.

“They are training officers to de-escalate, but they’re also trained that, if you feel threatened, you can go directly to lethal force, whether the fear is supported or not,” Stormer said, adding that there is little evidence that the LAPD or other Southern California forces have changed their basic approach in confrontational situations.

Jackson Hinkle, who ran unsuccessfully for the San Clemente City Council, concurs. On Thursday, Hinkle helped lead protests over Reinhold’s killing and said that “the city has a lot of animosity and aggression toward the local homeless population.”

There was also animosity against those who mourned Reinhold’s death Friday. In South San Clemente, along bustling and noisy El Camino Real, where the incident played out, traffic streamed nonstop. Truck drivers honked at the dead man’s memorial, while youths yelled from their cars, telling mourners to “Get a life!”

The two deputies involved in the shooting, Hinkle said, “know our local unhoused population, and they are supposed to be trained to handle issues with the unhoused, like mental health crises and de-escalation.” He added, “In this effort, that clearly failed them.”

Since Reinhold’s death, friends on social media have circulated an image of him in better times. He’s smiling and happy, posing at a birthday party with his son, his daughter and his wife, a nurse at some of the biggest hospitals in Los Angeles.

More recently, though, Reinhold had struggled with mental health issues, said Najee Ali, a South Los Angeles civil rights activist who knows the dead man’s family. That’s what propelled Reinhold from a comfortable life in Ladera Heights to the streets of San Clemente.

Reinhold spent about a decade as a Nissan car sales associate in the South Bay, according to his LinkedIn profile. Before that, he was an audiovisual technician in Burbank.

Michelle Maltais, a former Los Angeles Times editor now working for USA Today, met Reinhold through youth soccer. She called him a “loving dad and gentle man who quietly offered to help when I was co-coaching a very energetic team of 5-year-old boys and girls.”

The kids “responded immediately to his positive energy,” she said. “I remember him as a proud father of his incredibly talented son and as a positive force on the field.”

On Thursday, Phil Pascal knelt at Reinhold’s growing memorial, praying after hearing the “crushing” news about Reinhold from mutual friends on Facebook and Instagram. The two men were classmates at Clark Atlanta University, a historically Black college in Georgia, and took business courses together.

Pascal last saw Reinhold at a college homecoming event in Atlanta. He said he worries about the two young children left without a father, a man who had been “always jovial, funny and really, really sweet.”

Pascal handles marketing accounts in Las Vegas. This week, he’s been visiting Orange County. The terrible news about his old friend prompted him to head to Hotel Miramar and pay his respects.

“Oh, my God, I don’t know what happened that led him to this point,” Pascal said. “But why?”

Hans-Dieter flick: I Hope Alaba will sign a contract with Bayern. Our club is one of the best in the world
Diego Maradona: Messi gave Barca everything, brought them to the top. He was not treated the way he deserved
Federico Chiesa: I hope to leave my mark in Juve. We will achieve great results
The Coach Of Benfica: I don't want us to look like the current Barcelona, it has nothing
Guardiola on returning to Barca: I'm happy at Manchester City. I hope to stay here
Fabinho will not play with West ham due to injury
Ronald Koeman: Maradona was the best in his time. Now the best Messi
Source https://www.latimes.com/california/story/2020-09-25/la-me-homeless-black-man-shot-dead-orange-county-sheriff-san-clemente

Two Museums Tried to Sell Art. Only One Caught Grief About it.

How to host a DIY drive-in movie screening: Horror flicks to election streams

Pizza to the Polls: How to get free food when voting in-person

A 7.0 earthquake struck near Greece and Turkey, killing at least 14 and injuring hundreds

Covid-19 antibodies diminish over time, but experts say there's no reason to be alarmed

Sno(w)ctober? Early snowfall blankets much of northeast US

In El Paso, the man who inspired 'BlacKkKlansman' and wife battle Covid-19 amid surge

Is Trump about to reprise Herbert Hoover's historic defeat in 1932?