In 2009, CNN boss Jeff Zucker praised Kamala Harris as 'important' to the country

Last August, during the Democratic primary, McClatchy unearthed a 2009 India Abroad about a breakfast the then-NBC Universal CEO hosted in New York City, where he paid tribute to the then-San Francisco district attorney as she was set to run for California attorney general.

“Kamala is not just important for the city of San Francisco, the state of California, but for the entire country,” Zucker told the posh attendees.

The event, which was reportedly designed to introduce Harris to “some of the leading movers and shakers in New York,” was confirmed by CNN.

“Jeff hosted a small breakfast in New York for Kamala Harris when she was the District Attorney of San Francisco,” CNN spokesperson Allison Gollust told McClatchy at the time.

“He was then CEO of NBC Universal, and was introducing the DA to some of his colleagues in an informal setting,” Gollust added. “He has seen her a handful of times in the last 10 years, all in his capacity as a journalist. His relationship with the senator is no different than any other national politician, and he has never endorsed her, or anyone, in any ca‎pacity.” 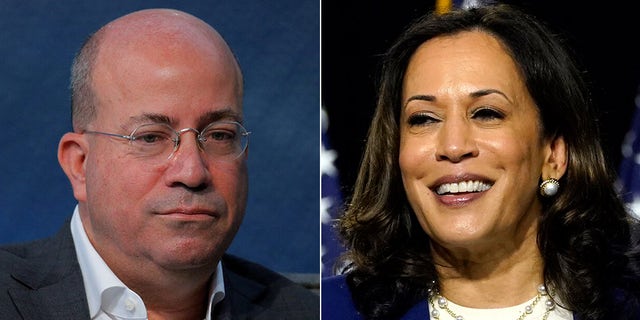 Harris' presidential campaign also told McClatchy, “They talk when they see each other, like at the town halls… that’s really the extent of it."

McClatchy noted that Zucker reportedly said, according to India Abroad, that Harris was “unbelievably special,” “incredibly exciting” and she initially charmed him over dinner in San Francisco when she was a district attorney.

Several of CNN's on-air talent have showered Harris with praise since joining the Democratic ticket. "The Lead" guest-anchor Pamela Brown called it a "remarkable moment" and touted the senator's "remarkable rise" and how she's a "fighter." Other journalists complimented Harris' "charisma," "personal magnetism," and "celebrity" like persona.

CNN commentator Ana Navarro rejoiced the idea of a Biden-Harris presidency on Twitter, writing that she can go to bed happy with "Uncle Joe" and "Auntie Kamala" in the White House.

Chris Waddle: I Don't see Manchester City Winning the Premier League this season
Lewandowski and Kuizans laughed at rumors of a conflict in training
Kevin-Prince Boateng signed a contract with Monza Berlusconi until the end of the season
Ex-Manchester United player Raphael: van Gaal is one of the worst people I've worked with. I was told that he doesn't like Brazilians
Rebic dislocated his elbow and may miss several Milan matches
Manchester United will work on Sancho's transfer until the transfer window closes
Frank Lampard: Must stand up for the Cap. I'm not going to say that he spent his last game for Chelsea
Source https://www.foxnews.com/media/cnn-jeff-zucker-kamala-harris-important?utm_source=feedburner&utm_medium=feed&utm_campaign=Feed%3A+foxnews%2Fmost-popular+%28Internal+-+Most+Popular+Content%29

Uber’s self-driving car unit has made little progress despite $2.5B price tag

Remington Outdoor, bankrupt gunmaker, to be sold in pieces to seven buyers

Condola Rashad on social media, Gen Z and the importance of voting in Black community

Only 10 states are seeing downward trends in new Covid-19 cases, and NYC now has a surge

US judge orders stop to Postal Service cuts, echoing others

The stakes of the Senate, explained

Washington Post Editorial Board Endorses Biden: He Is ‘Exceptionally Well-Qualified’

The Tom Brady doubters are in trouble now

Only 10 states are seeing downward trends in new coronavirus cases

Healthy US economy failed to narrow racial gaps in 2019

Health-care workers can get tickets to ‘SNL’ Season 46 premiere

Trump Says He Paid Millions in Taxes, Plays Down Concerns About Debt

Jennifer Aniston And Brad Pitt Finally Back Together After Romantic Getaway To Big Sur?

Chiefs' Patrick Mahomes values playing in Kansas City over cities like New York: 'They care about the person you are'

Whoopi Goldberg Goes Off on Trump for Reportedly Not Paying Taxes: “How Dare You!”

We need to make the Senate playing field as big as possible. That's why we're endorsing in Louisiana