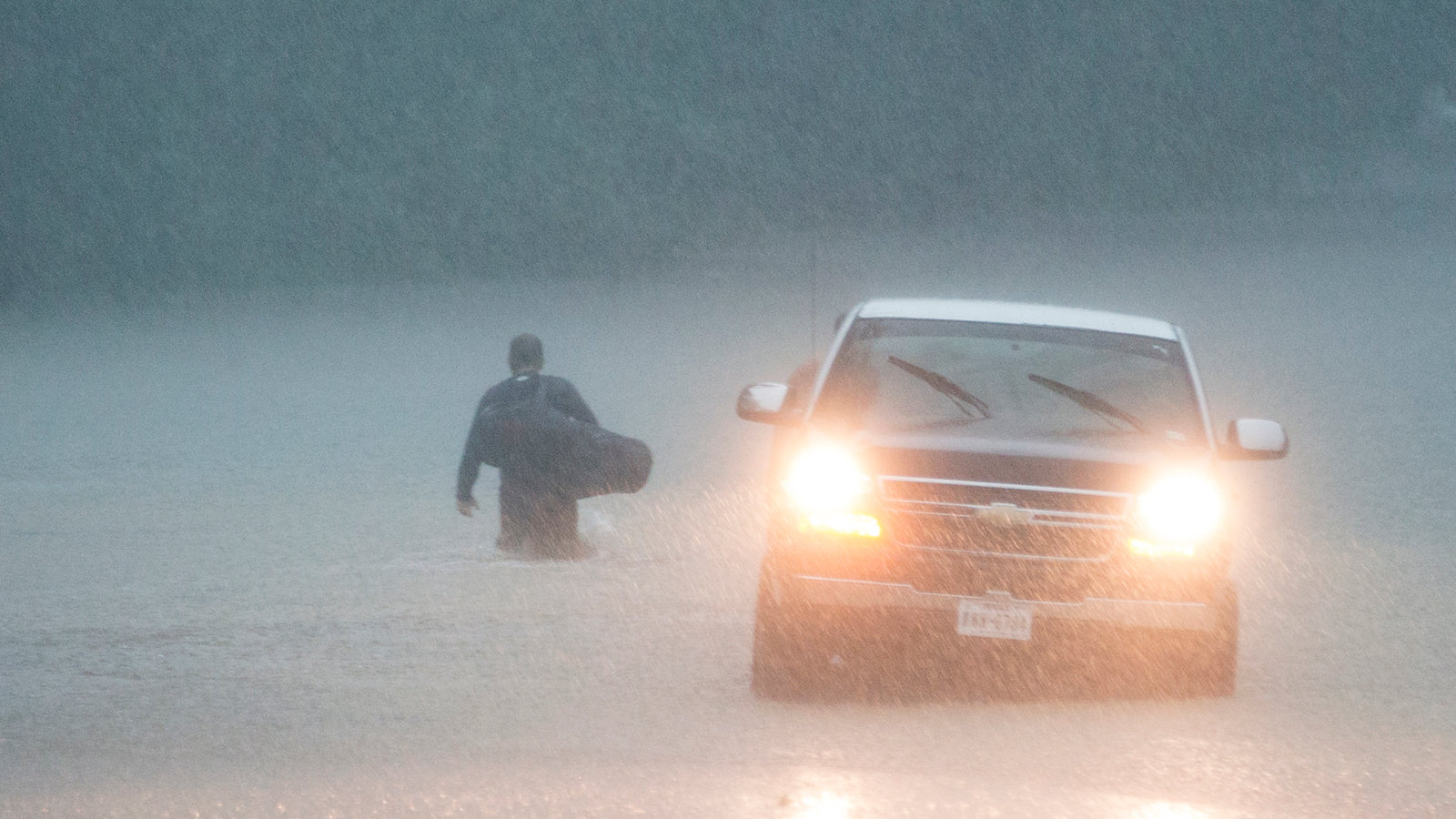 Areas that were hit by Hurricane Harvey in 2017 are now facing heavy rainfall and flooding as Tropical Depression Imelda churns through the Houston region.CreditCreditBrett Coomer/Houston Chronicle, via Associated Press

Tropical Depression Imelda deluged southeast Texas on Thursday, pounding some areas with torrential rain and causing devastating flooding that shut down highways and left hundreds of residents stranded and waiting for rescue.

The storm, which had been churning over Houston on Wednesday, slammed the area around Beaumont, Tex., overnight, adding to rainfall totals that are among the highest the region has faced since Hurricane Harvey in 2017.

As the chaotic scene unfolded on Thursday, the toll from Harvey was fresh in the communal memory in a part of the state that has been flooded again and again, where some residents who were devastated by the storm two years ago had only recently begun to fully recover.

Harvey battered a wider region, lingering for days as a tropical storm and dropping more than 50 inches of rain in some areas. Imelda’s heaviest rains have come in more isolated pockets, but have soaked areas southwest of Beaumont with up to 42 inches of rain this week, most of it in the last 24 hours, and many residents feared that the storm could do just as much damage.

Beaumont is flooding, and up to 42 inches of rain have fallen nearby.

Imelda, with maximum sustained winds of 25 miles an hour, is the first named storm to hit the region since Harvey in 2017.

While Houston was perhaps the hardest hit then, Beaumont also suffered deadly flooding that shut off running water and nearly turned the city of 120,000 into an island. Between the two cities, for 100 miles, town after town was under water.

On Thursday, drivers in Beaumont were stuck in their cars as the flooding around them reached as high as their door handles. Exxon Mobil shut down its chemical plant there and was closely monitoring its refinery on the same site. The Beaumont Police Department said that it was overwhelmed with calls, fielding nearly 600 requests for assistance as of Thursday morning.

To the southwest, Chambers County was experiencing some of the worst flooding, as heavy rain poured down from a dark gray sky, giant blue-white veins of lightning flashed and thunder growled. Some panicked residents were struggling to get through to 911 operators, and resorted to email instead. A hospital evacuated some patients but remained open, with employees trudging barefoot across the sopping floor to treat those who remained.

As the rain pelted down and waters rose on Thursday, some homeowners and officials were reporting flooding as severe as any they had seen in years, with little sign of a reprieve. Forecasters predicted that the rain would continue, with an additional 10 inches of rain possible through Thursday night.

Houston waited and watched, with Harvey on its mind.

In the Houston area, which had seemed to escape the worst of the storm earlier in the week, rain was falling at up to four inches per hour on Thursday.

George Bush Intercontinental Airport north of Houston, which serves an average of 120,000 travelers a day, briefly came to a “full ground stop,” in the morning, with all flight operations halted because of the weather. Flights headed to Houston were delayed by an average of nearly four hours. Some were diverted south to the city’s secondary airport, William P. Hobby, where flight operations were continuing.

At a news briefing, Mayor Sylvester Turner of Houston discouraged employers from sending their workers home early, saying everyone should avoid driving on the roads until the flooding receded.

Climate change tends to increase the amount of rainfall during storms, since a warmer atmosphere can hold more moisture, but scientists must evaluate individual storms after the fact to determine how much climate change may have contributed to them. (Researchers found that the record rainfall during Harvey was as much as 38 percent higher than would be expected in a world that was not warming.)

‘I’ve lost everything’: A new arrival was forced to flee to a shelter, with dogs in tow.

Margie Carroll, who moved into a house in Winnie, Tex., two months ago after selling her small farm in Ohio, said she had no idea she might get hit with such extensive flooding so soon. Her flood insurance application had not yet been approved.

“I’ve lost everything,” she wrote in a text message from a shelter in Chambers County near the small city of Anahuac, on Trinity Bay east of Houston and southwest of Beaumont. Her phone could not get a strong enough signal on Thursday to take calls.

“My house is gone,” she wrote on Facebook. “My Jeep is gone.”

She posted a video early on Thursday showing brown water rising throughout her house, with the floodwater nearing the top of her kitchen counters, as lightning flashed outside. “Please make it stop, it’s got to stop,” she said.

Ms. Carroll had floated her eight dogs, which were frightened by the rising waters, on mattresses and a love seat in her house. Later in the morning, she said she and her disabled brother, as well as the dogs, had escaped from the house and reached the shelter.

About 50 people were staying at the shelter in Chambers County, where about 800 houses and businesses had been flooded, said Ryan Holzaepfel, the county fire marshal. He said officials were responding to about 100 requests for rescue, but were having trouble getting to some people because Interstate 10, a main highway, was closed by flooding.

“A lot of people are getting flooded in their cars,” he said. “They think they can drive through the water, but it’s deeper than they think.”

A volunteer with a boat ventured into the storm, saying it was like Harvey ‘all over again.’

Colby Croom, a volunteer who uses his boat to help rescue people from flooded homes in the Beaumont area, said his cellphone was inundated with dozens of calls on Thursday morning, sometimes hearing from more than 10 people a minute.

“Most of them are crying, begging for me to come rescue them,” Mr. Croom said from a grocery store parking lot in Vidor, Tex., describing the calls he had gotten from miles away in Beaumont and Port Arthur. “There’s no way for me to get there,” he said.

In a video phone call on Thursday, Mr. Croom pointed out the high water surrounding him in the parking lot, which was serving as his base of operations. He said he had been out since early in the morning, and had already helped several families flee their homes.

“I’ve seen water over rooftops,” he said. “I’ve seen vehicles stalled out. Man, it’s kind of like the Harvey deal all over again.”

5 players and 2 coaches of Barca got sick with coronavirus. There were no symptoms (RAC1)
Liverpool can allow Brewster and Wilson to remain on loan at Swansea and Bournemouth until the end of the season
Everton can offer 30 million euros for Allan
Arsenal offered Aubameyang a contract until 2023, the salary is the same – 12 million euros
Inter demands 90 million euros and a player for Lautaro. Barca's latest offer: 60 million plus Vidal and Semedu
Southampton have agreed a new 4-year contract with coach Hasenhüttl
Willian's agent: he wants a 3-year contract. Chelsea's policy is to renew for a maximum of 2 years
Source https://www.nytimes.com/2019/09/19/us/houston-beaumont-flooding-imelda.html?emc=rss&partner=rss