How Infrared Images Could Be Part of Your Daily Life 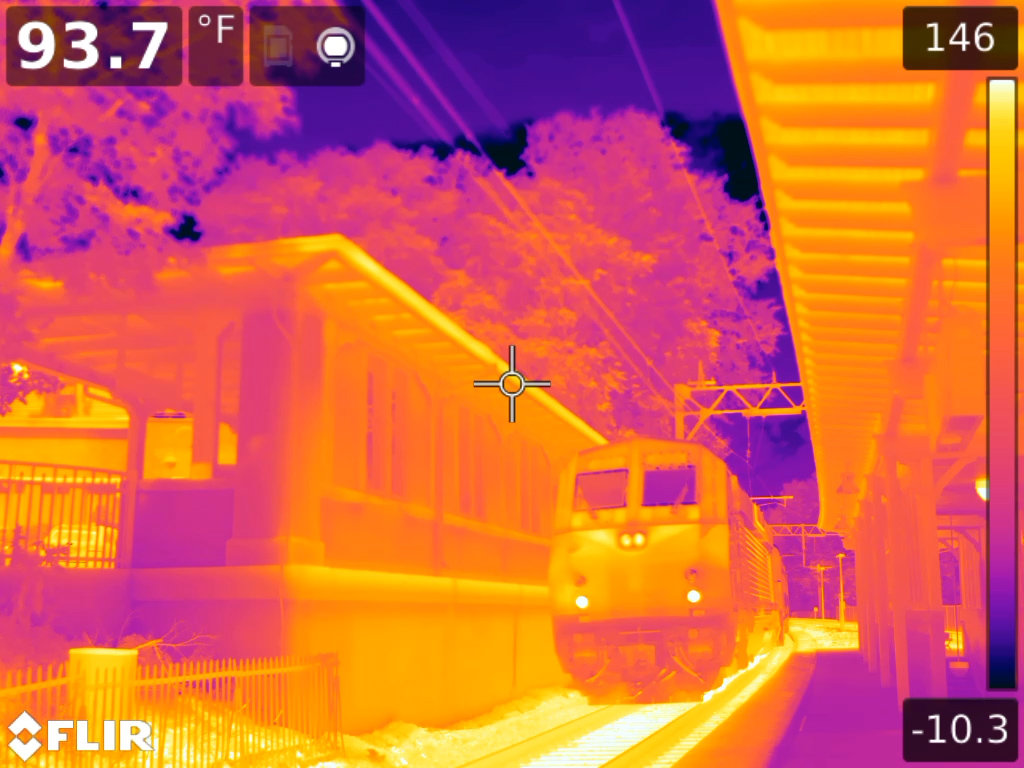 In a post-quarantine world, heat sensors could help spot sick people with elevated temperatures as they enter public places. But it’s not that simple.

Welcome to Maplewood, N.J. … in infrared.

As the country reopens, you might start seeing more images like these: real-time heat maps that could find sick people, before they know they are sick. And in a post-quarantine world, you might start having your temperature taken. A lot.

See the cross hair below? That’s where this camera is taking a temperature reading.

A fever is one indicator that someone may be exhibiting coronavirus symptoms, and the Centers for Disease Control and Prevention recommends temperature screenings in a variety of environments, including schools and businesses.

As shelter-in-place restrictions vary across many cities and counties around the country, officials have begun buying technology like infrared cameras in the hopes of helping track and contain the spread of the outbreak.

I’m a video journalist at The New York Times, and last year, I was trained to use infrared cameras for an article that exposed immense methane leaks at oil and gas facilities, worsening global warming.

When the pandemic took hold, I started seeing more and more companies like Amazon using this technology to help identify sick people in their warehouses. Thermal imaging cameras are beginning to appear in Subway restaurants. Carnival Cruise Lines, whose ships became hot spots for the virus’s spread, said all passengers and crew would be screened when it began sailing again.

The rapid adoption of infrared technology had me wondering how helpful it could be. Several systems are being rolled out, including camera-based ones and others that make people walk through thresholds like metal detectors. Could they actually help contain the spread of the virus while we wait for a vaccine?

A Harris Poll conducted in late March, just after the majority of the shelter measures went into place across the United States, found that 84 percent of respondents favored mandatory health screenings to enter public places.

I got my hands on a temperature-reading infrared camera and hit the streets of Maplewood on a hot summer day last week. I wanted to understand where the camera succeeds and where the challenges are in capturing accurate temperature readings.

Maplewood is part of Essex County. There have been over 18,000 confirmed cases in the county, and over 1,700 related deaths. But like many places in the country, Maplewood is opening back up — albeit mostly outdoors. Streets once filled with cars are now partly filled with outdoor seating for restaurants.

Here’s how to understand these images: The first image above shows a woman who ordered something warm to drink. The waitress hands her a bright white cup. The second image shows a woman nearby eating ice cream. The ice cream is dark blue. It means that white = hot; dark = cold.

Even a working infrared camera system won’t detect many people who may have the virus but aren’t exhibiting symptoms.

But equally important is how the cameras are used. 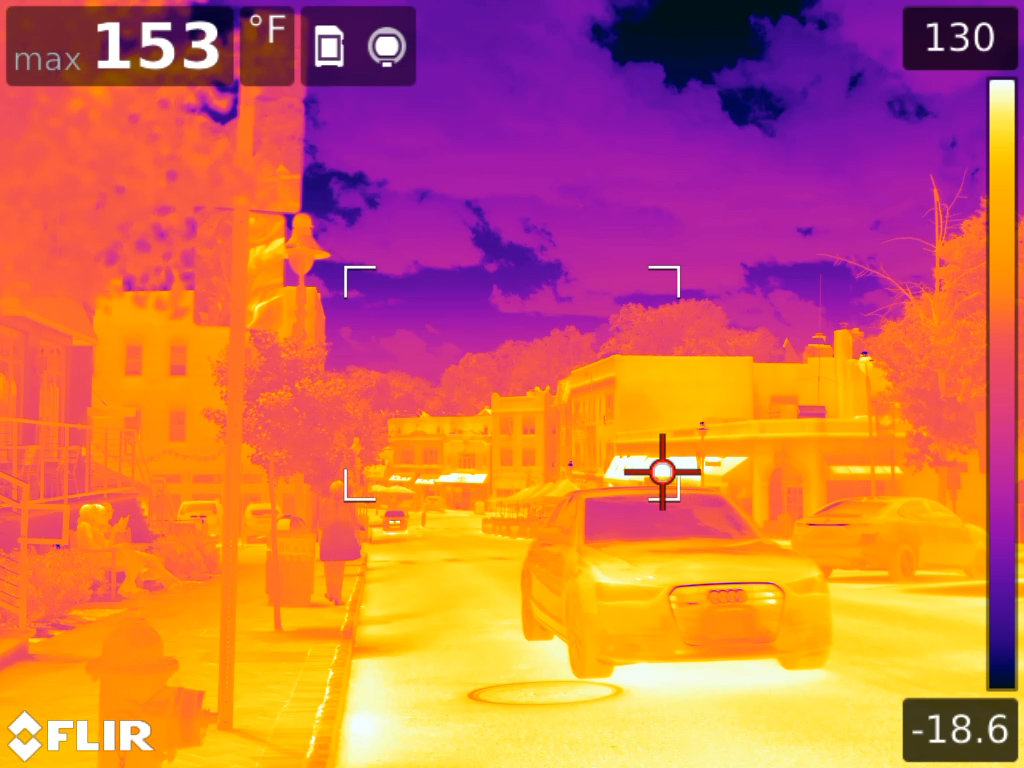 A hypothetical situation goes something like this: A factory opens its doors and thousands of workers pour in. Above them, infrared cameras point to individuals in a big crowd and pick out the sick people.

This, however, would not produce accurate results, according to experts.

“The problem with crowd scanning is we know temperature measurements are impacted by the distance from camera to target, and crowds are different distances away,” said Chris Bainter, the director of global business development for FLIR, a maker of infrared technology. “The cameras don’t focus from three feet or six feet away to infinite with everything in focus.”

“Where you measure has a big impact, and studies have shown the tear duct is the best place,” he added. “If you are looking at a crowd of people, are you getting an accurate reading?”

The real version of this technology goes something like this. One camera, one subject. Here’s my wife on our stoop. 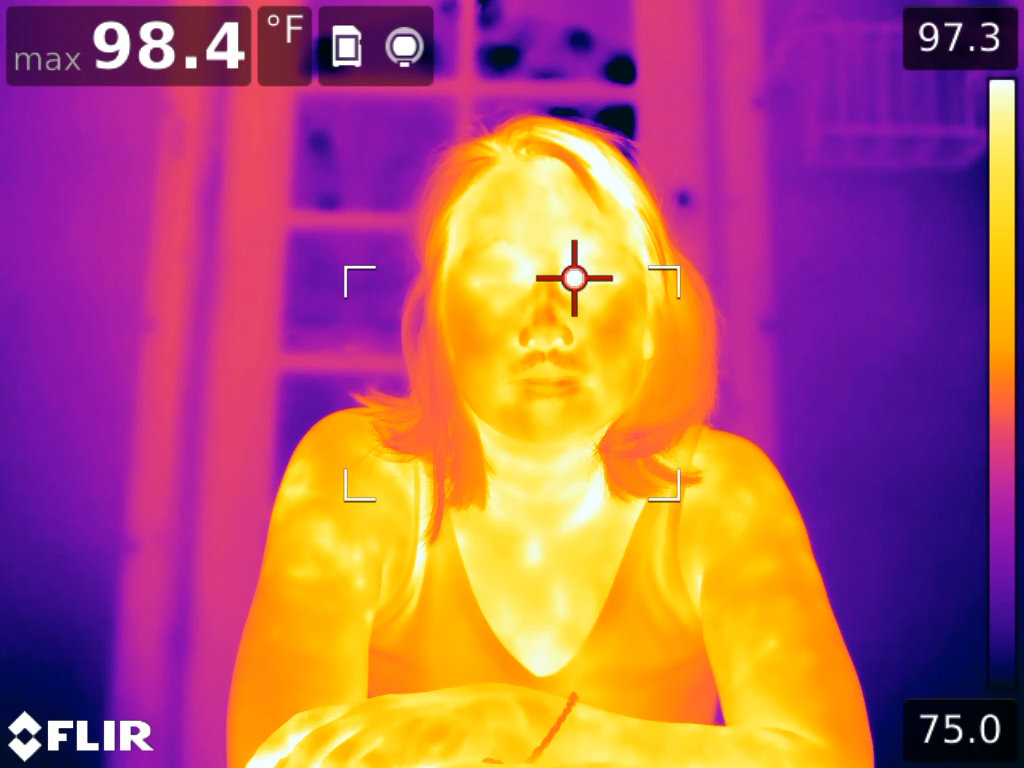 I can point the camera at her, but to get a more accurate temperature reading, the cross hair needs to be right in the subject’s eye socket. A bit to the left or a bit to the right and you’ll see a different temperature. This is important because it changes the time it takes to get someone’s reading.

There are other factors to consider. “Core body temperature has slight variation from person to person,” Mr. Bainter said. “What’s normal for me might be different than you. And that can be driven by age, gender, ethnicity, diet or recent exercise. And then there’s some environmental factors. Throughout the day, your body temperature changes from the morning to the afternoon.”

The day I was filming in Maplewood, temperatures were around 95 degrees. Everyone was running hot. Some surfaces, like the bench below, were nearly 100 degrees. 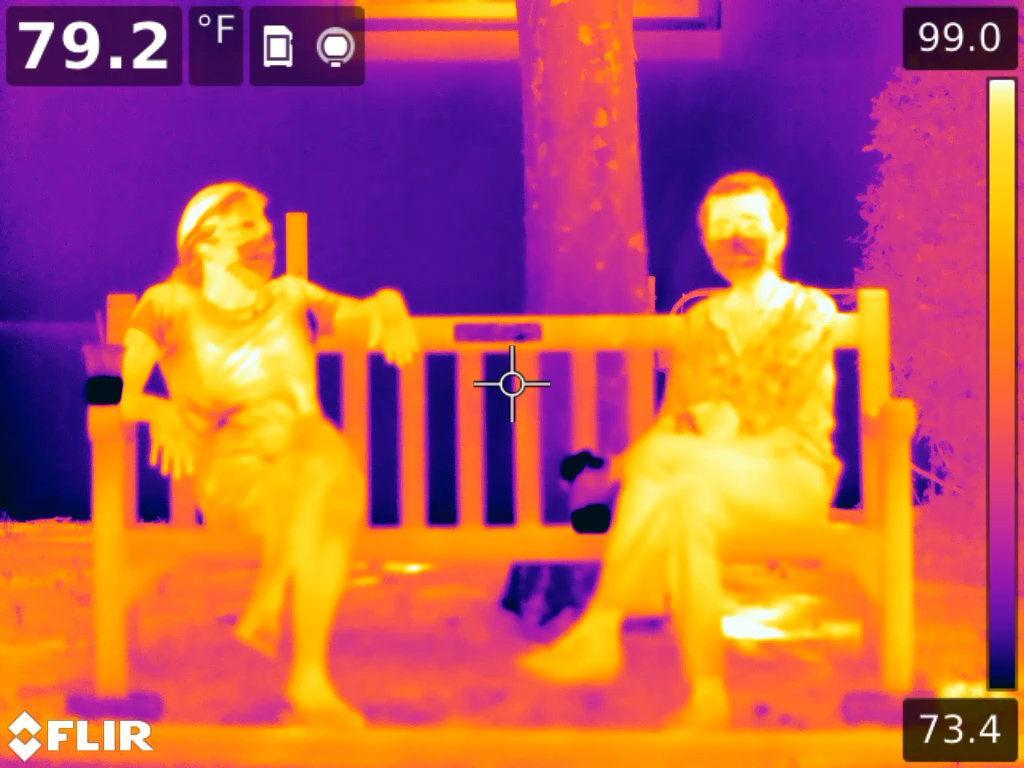 The growing use of the technology has raised privacy and other concerns.

Civil liberties experts have warned about data being collected on employees and used without their permission. Democratic and Republican lawmakers have proposed bills to help protect people’s information and privacy as data like temperature readings is collected, but the legislation has so far stalled in Congress.

All of this being said, could this technology work if used correctly? Yes. Is it better than nothing? Absolutely. 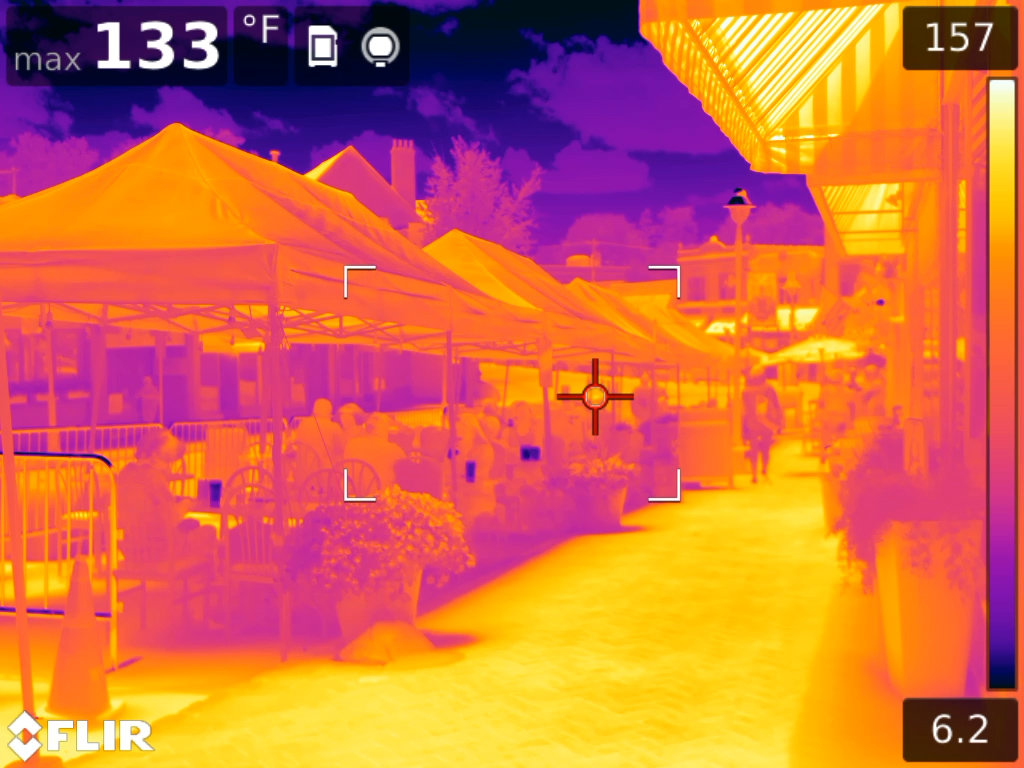 But will throwing infrared cameras up all over society make us safer from the virus? How might a grade school student react to seeing a classmate set off an infrared-based alarm walking into school? Will the time it takes to screen everyone trying to get into a building create problems for schools or offices? These are important questions that we will face in a post-quarantine world.

And some aren’t so hypothetical. Across the country in Mission, Texas, school administrators debated the merits of using infrared to screen students as they come in the door.

On June 15, during a board meeting for the Sharyland Independent School District, officials deliberated the use of the SafeCheck Walkthrough Body Temperature Detector, which measures temperatures from the wrist or forehead.

“In the event that we have to take each student’s temperature when they walk in to the door, that’s 700 kids, and we have one nurse, typically on staff, at each campus,” said the district’s chief financial officer, Ismael Gonzalez. “They are saying this can pick up 70 kids a minute.”

A week later, the school board approved spending $178,488 for the devices.

Mata on Manchester United's victory: The team is physically exhausted. It's not our best match, but it's important to win now
Bas Pro 1:2 from Inter: after the opening 20 minutes, Bayer entered the game. I believed that we could do something
Conte on 2:1 with Bayer: When a coach sees such dedication, he is always happy
Sanchez finished the match against Bayer, despite the injury
Solskjaer is the fifth coach with whom Manchester United reached the semi-finals of the European Cup
Manchester United are set to buy Sancho this summer despite Borussia's claim that he is staying
Shirokov beat the judge at an Amateur tournament: promised that # # # # # [vdarit] for a red card-and # # # # # [vdarit]
Source https://www.nytimes.com/2020/07/02/technology/coronavirus-infrared-cameras-temperature-sensors.html