Dreaded gangster Vikas Dubey, wanted in the killing of eight policemen in Kanpur, was arrested from Mahakal temple in the Madhya Pradesh town of Ujjain today (July 9) morning.

Dubey had been absconding for almost a week after the ambush on a police party in his village. 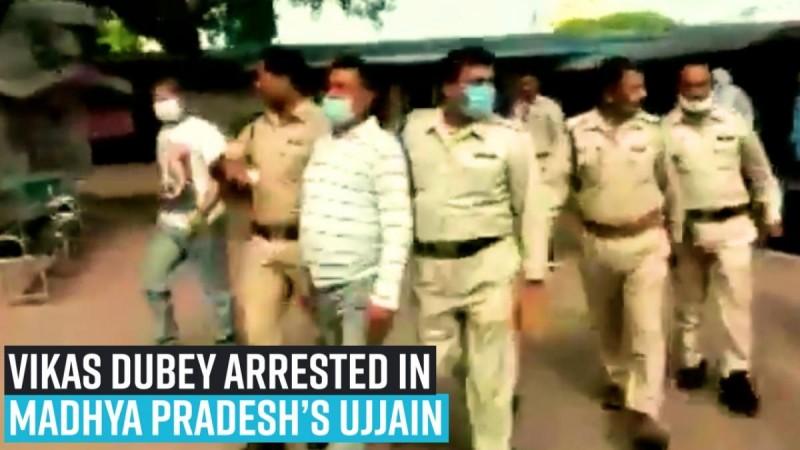 "Main Vikas Dubey hun, Kanpur wala (I am Vikas Dubey from Kanpur]," screamed the UP gangster.

As per reports, Vikas Dubey reached the temple at around 8 am and then informed the security men about his identity and asked them to inform the police.

Also, "Main Vikas Dubey hun, Kanpur wala (I am Vikas Dubey from Kanpur]," screamed the UP gangster, as per reports.

This action of Vikas Dubey had alerted the security guards at the Ujjain temple following which the police was alerted. As policemen walked him towards a police car, Vikas Dubey shouts again, "Main Vikas Dubey hun, Kanpur wala".

Dubey sits comfortably on a sofa

In a photograph that has now gone viral, shows Dubey sitting comfortably on a sofa inside the temple complex. 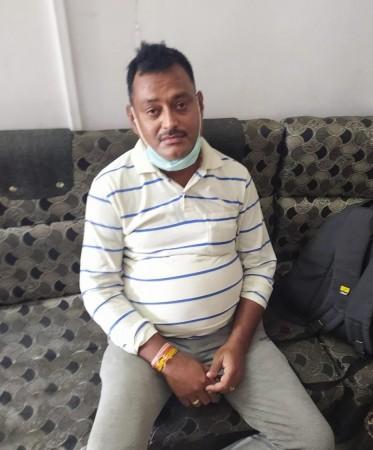 Mishra said the details of his arrest and related process would be made public by the police later. Mishra said Dubey has been known to be "cruel and crafty" from childhood. The police had to be extra cautious.

Mishra said the police was alerted by the intelligence agencies. Video clips released by various channels showed Vikas Dubey being held by the scruff of his collar by the police, shouting, "Haan main Vikas Dubey hoon Kanpur wala (Yes I am the Vikas Dubey from Kanpur)".

Everything points to Vikas having travelled all the way from Faridabad to the high-security zone of Mahakaal to avoid death in a police encounter. In the secure premises of Mahakaal temple, he could avoid extra-judicial justice. Two of his alleged gang members were also said to have been arrested.

The Madhya Pradesh police has taken the gangster away to the Mahakaal police station and the UP police will now seek transit remand and bring him to Kanpur.

Police theory of the arrest has several loopholes

The police theory of the arrest, meanwhile, has several loopholes.

Temple officials admit on condition of anonymity, that Vikas Dubey disclosed his name at the counter where he was giving money for donation and then asked them to inform the police.

Dubey apparently di not use any disguise to evade the police and neither did he have any arms since weapons are prohibited in the temple complex.

This is a pre-planned surrender because it seems too simple to be true. Vikas had successfully eluded the police in three states for one week and it is rather unusual that he would enter a temple without a mask and get arrested. He knew that he would be shot dead if he gave himself up to UP police," said a retired DGP.

"The gangster wanted to surrender in a 'safe state'. He did not go to court because of police presence and, therefore, chose the temple. Unless the police decide to make another mistake, Vikas Dubey will not be harmed physically now," he said.

Dubey had been eluding the police since the past one week and though four dozen teams of Special Task Force and state police were chasing him, they could not nab him.

Five associates of Vikas Dubey have been shot dead in UP after the killing of eight policemen last week.

All of them were reportedly involved in the shootout.

Dubey's arrest is a major setback to the UP Special Task Force that failed to nail the gangster. The STF, which had been claiming till late on Wednesday that Dubey was hiding in Delhi-NCR, was blissfully unaware that he had moved across to Ujjain in Madhya Pradesh. There is a distance of 773 kilometres from Faridabad where Dubey was reportedly seen last on Tuesday and Ujjain where he finally 'surrendered'..

The STF which has killed five accomplices of Vikas Dubey in the past seven days, has put out a strikingly similar theory for all the encounters - "we tried to stop them, they opened fire and were killed in retaliatory firing".

Lopetegi about éver Banega: When he plays well, the whole of Seville plays well
Sanchez received 7.5 million pounds from Manchester United for terminating his contract
Javi Martinez is Interesting to Renn. The club will play in the Champions League
Fonseca Pro 0:2 with Sevilla: Roma deserved to lose
Manchester United are ready to sell Lingard. He has scored in the last two matches
Dzeko Pro 0:2 with Sevilla: Roma never got into the game
Sergio Region: Sevilla are determined to win the Europa League. We want to win everything we can
Source https://www.ibtimes.co.in/how-dreaded-gangster-vikas-dubey-was-arrested-824105

Why 'negative partisanship' explains so many of America's political problems

July US jobs report is expected to point to hiring slowdown

For Kris Kobach, A Dream Dashed

A Tribute to the Irish ‘Titan’ John Hume

Conservatism is a Collection of ‘Losers.’ It Doesn’t Have To Be.

This Day in History: August 7

Why did Rajinikanth hesitate to hold Shobana's feet for a scene in Shiva; danseuse reveals

Instagram's algorithm blocked negative hashtags of Trump, but not Biden

Trump Signs Executive Order That Will Effectively Ban Use Of TikTok In the U.S.