The residents of Washington, DC, would very much like the nation’s capital to be the 51st state. On Thursday, for the first time in 25 years, the Democratic-run House of Representatives held a hearing on legislation that would do that.

If it were, Holmes Norton’s bill would essentially limit the District of Columbia, as controlled by the federal government, to a two-mile enclave, spanning the White House, Capitol Hill and the Supreme Court. The rest of the district would turn into the new state of Washington, Douglass Commonwealth (still abbreviated as Washington, DC).

The bill would give residents full voting congressional representation, and end the need for congressional review of local DC laws. The District’s roughly 710,000 residents — more than Vermont or Wyoming — would become full-fledged members of the union. In 2016, a referendum on DC statehood won an overwhelming 80 percent of support.

The argument in favor of DC statehood is captured by every DC-issued license plate: “Taxation without Representation.” Residents pay federal taxes, but don’t have a say in how federal revenue is apportioned. They send people to the military, but their elected officials cannot vote on declarations of war. DC’s criminal justice system is operated by federal prosecutors. And while the city operates its own public school system, and a health care system like a state would, Congress — a body they have no voting representation in — has purview over their local laws.

The last time this fight saw momentum in Congress was in 1993, when it was forcefully rejected on the House floor; nearly half of the Democratic conference joined Republicans to vote against it. At the time, former high-ranking Rep. John D. Dingell (D-MI) argued against it saying, “No citizen of Washington is chained to the pillars of the U.S. Capitol. They can leave any time they want.”

A lot has changed in nearly 26 years. Democrats are united in their support for DC statehood, symbolically voting to endorse the idea in March. Every Democratic candidate for president has endorsed statehood. But still, there is unanimous opposition among Republicans who call it a partisan play to get more Democrats into Congress (DC is a Democratic stronghold), and argue it goes against the intent of the founding fathers.

“Yes it is true, we are more brown and more liberal than some of you, but denying statehood would be unfair no matter who is affected,” Bowser said at the hearing.

For the first time in more than two decades, DC statehood got a hearing in Congress 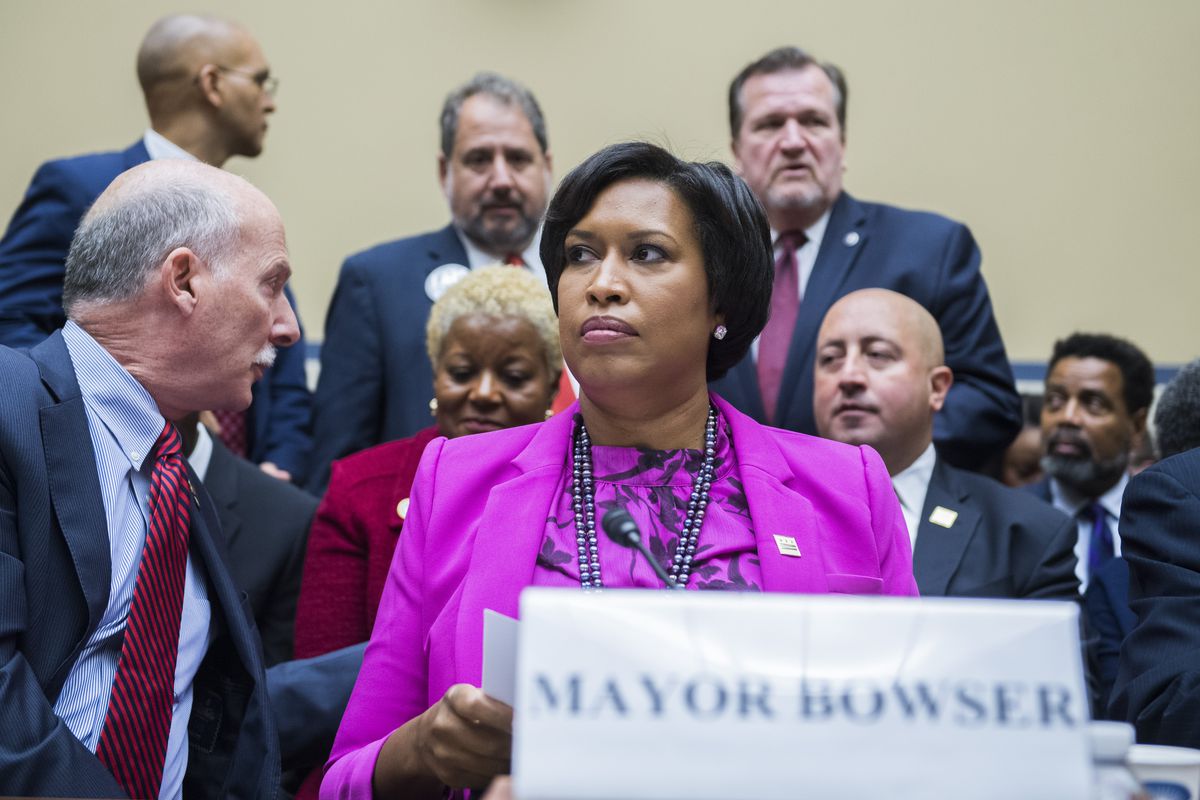 Thursday’s hearing was a big moment for a DC statehood movement that’s been stuck in local activism for more than two decades, unable to get a federal debate.

But much of the hearing was a reminder of the political difficulties such a bill will face going forward. Held in the House Oversight and Reform Committee, and chaired by Norton, the issue was debated among Congress’s most vocal partisans, including arch-conservative Trump allies Reps. Jim Jordan (R-OH) and Mark Meadows (R-NC), as well as the furthest left members of the Democratic Party, like Reps. Alexandria Ocasio-Cortez (D-NY) and Rashida Tlaib (D-MI).

Among those testifying were Mayor Bowser; Phil Mendelson, who chairs the District of Columbia’s city council; Kerwin Miller, a retired Navy Reserve commander and DC native; and Kenneth Thomas, an attorney with the Congressional Research Service. Constitutional scholar Roger Pilon with the libertarian Cato Institute testified in opposition.

But despite the renewed attention, the arguments for and against statehood haven’t changed much in two decades.

Those that argue against statehood say:

“We cannot ignore the elephant in the room,” Jordan said. “The District government currently faces serious allegations of misconduct.”

Advocates for statehood came prepared to respond to all those points. Norton pushed back on Jordan’s argument, saying, “Certainly officials in Ohio have been the subject of multiple political scandals for many years, but no one is suggesting that Ohio ought to lose its status.”

Norton also pointed out that “Congress has changed the size of the District twice,” though in much less radical ways than this bill is proposing. And Rep. Jamie Raskin (D-MD) pointed out there was also an assumption among the founders that there wouldn’t be a large population based in the District of Columbia.

As to critics’ argument that a state of DC would impose a financial burden on the federal government, the witnesses pointed out that the district represented touted strong financial records; the city remains extremely prosperous, with a growing population and growing local economy (a point of contention in local politics, as many argue the city should push bolder initiatives to improve public education, homelessness and affordable housing with those funds).

But while the advocates were ready to make the case for statehood, there was one point made in opposition that was difficult to reconcile. Pilon, and Republicans on the committee, put the debate in the context of the current political reality: Republicans aren’t going to be persuaded here.

“Even if it will pass the House, there is little chance this bill would be brought up in the Senate, much less that it would get to the president’s desk,” Pilon said.

Even if that were not the case, they are still some major open questions, the biggest around funding.

Democrats see this as a civil rights issue. Republicans are keeping to politics. 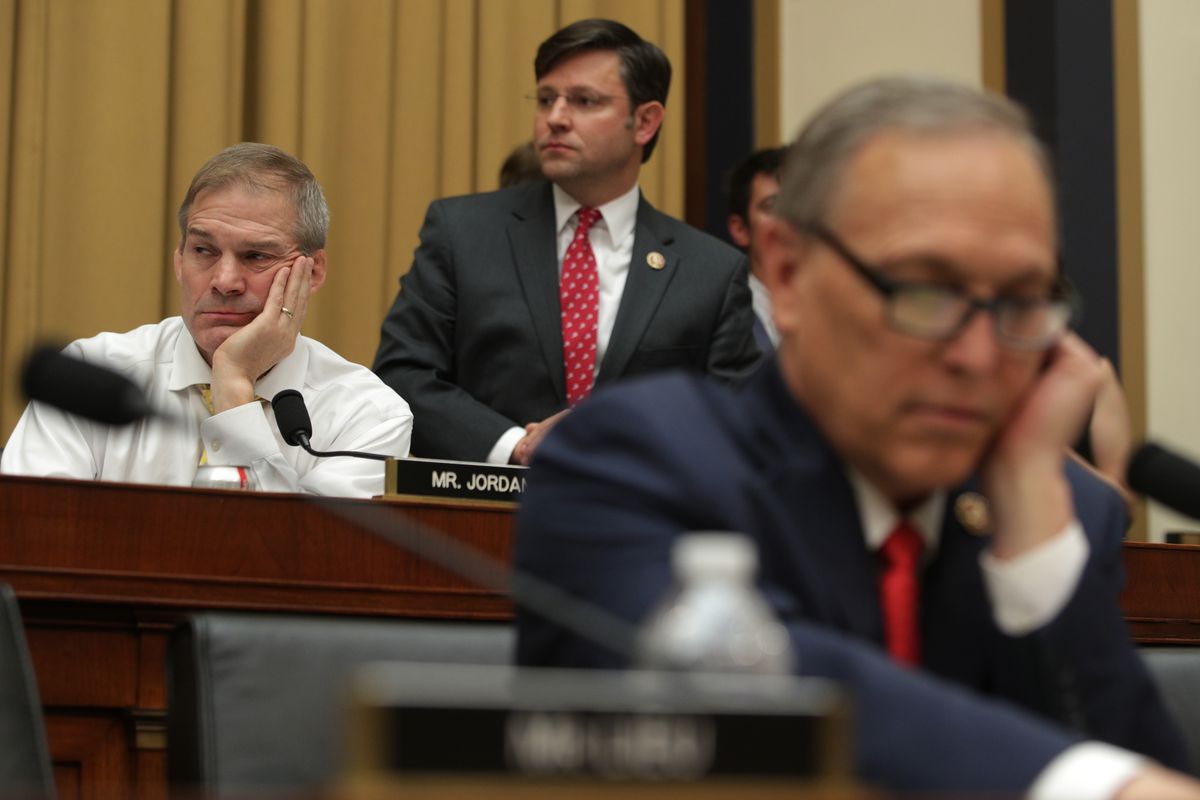 US Rep. Jim Jordan (R-OH), the top Republican on the House Oversight Committee argued DC was too corrupt to be a state.
Alex Wong/Getty Images

At the end of the day, much of the DC statehood debate comes down to partisanship.

Over the past two decades, Democrats increasingly see the need for DC’s statehood as a civil rights issue. Hundreds of thousands of residents have their laws, courts and tax dollars dictated by a body and government they have no representation in.

And in a district that is minority white, the context is that this system specifically marginalizes people of color.

“To deny the statehood of the District of Columbia is to deny the impact of slavery in America,” Rep. Alexandria Ocasio Cortez (D-NY) said during the hearing. “It is a form of denial of our history.”

She called it a form of “second-class citizenship.” That sentiment was echoed by Democrats throughout.

“One of the greatest blots on our democracy is having 700,000 of our citizens unable to be represented in our United States,” said Majority Leader Rep. Steny Hoyer (D-MD). “I have come to the conclusion that the only way to remove that blot is to be for statehood.”

But Republicans have long argued that this is just an insincere effort to get bolster Democratic standing in Congress. As Vox’s German Lopez explained:

Statehood would very likely net Democrats two senators and one representative in Congress, because the District of Columbia is a Democratic stronghold. Since which party holds the majority in the Senate can often be decided by one or two senators, DC statehood is a politically risky endeavor for Republicans.

“If I believed that this effort was sincere ... then there would be an introduction to repeal the 23d Amendment and to introduce a 28th Amendment,” Rep. Clay Higgins (R-LA) said, referencing the constitutional amendment that gives residents of DC the right to vote for representatives in the Electoral College.

As for Senate Majority Leader Mitch McConnell, he simply dismissed the idea as “socialism.”

Witzel on Sancho: He is one of the best players of his generation
Favre about Mike Sancho: I didn't see Anything – I can't judge. I don't know why he did it
The championship will resume on June 20
PSV does not plan to buy out Rodriguez. The defender will return to Milan
Bergomi on Icardi's transfer to PSG: Parisians don't have the prestige of Inter
Alan Shearer: I Want Mbappe to play in the Premier League. I see only one club for him – Newcastle
Sancho on a t shirt that says justice for George: We should not be afraid to speak out for what is right
Source https://www.vox.com/policy-and-politics/2019/9/19/20874196/dc-statehood-hearing-congress-holmes-norton

Only an intellectual could ‘justify’ these riots

Buildings around White House board up, protect valuables amid possibility of more protest vandalism

With 'Chromatica,' Lady Gaga wants you to dance your pain away. Would that you could...

Thousands march in Britain in solidarity with U.S. protests

The real cost of Trump's WHO pullout

As Protests Rage, Trump Will Not Move to Seize Control of National Guard Troops