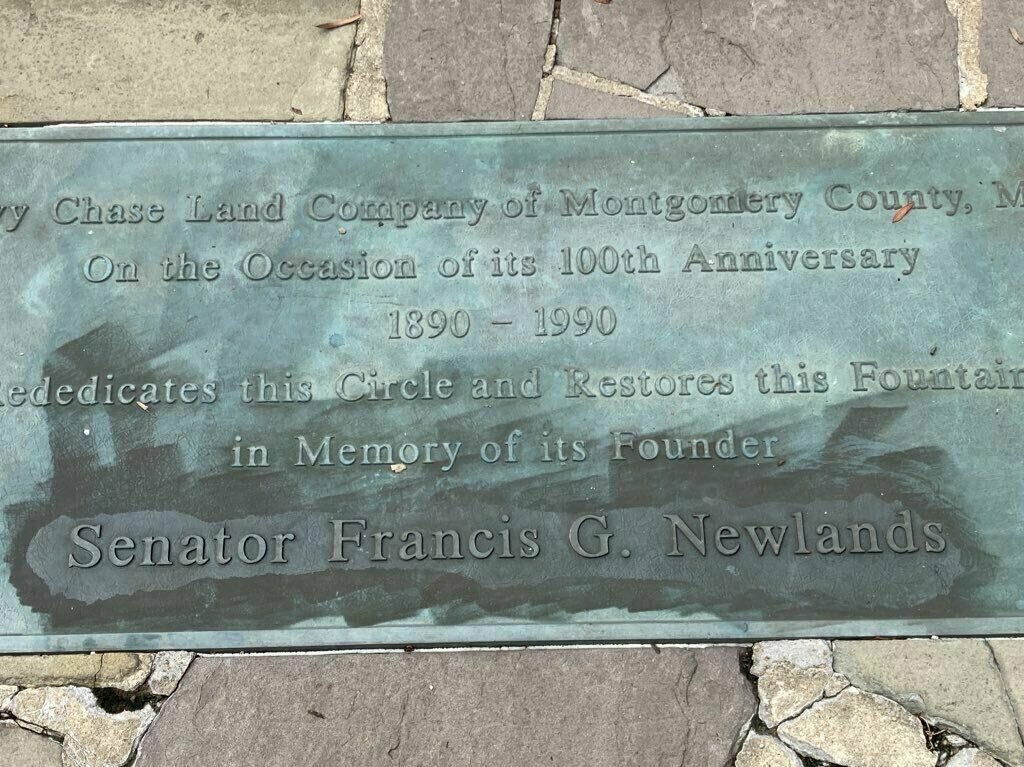 The name of Francis G. Newlands is memorialized in his namesake fountain, which straddles the D.C.-Maryland border. (WTOP/Ken Duffy)

D.C. Del. Eleanor Holmes Norton and Rep. Jamie Raskin, D-Md., introduced a bill to remove the name of Francis G. Newlands, who is memorialized there both in stone and in a plaque.

The Nevada senator helped develop Chevy Chase in the late 19th century. And because he was also an avowed white supremacist, it was intended to be exclusively white. (The area was of course later divided by the D.C.-Maryland border, with it remaining a neighborhood on the District side and becoming a village on the Maryland side.)

“Newlands belongs in the dust bins of history, not preserved on a traffic circle that symbolizes the unity between the nation’s capital and the state of Maryland,” Norton, a Democrat, said in a statement.

In his statement, Raskin reiterated that Newlands “backed efforts to deprive African Americans, Jews and other minorities of basic human rights.”

“We should stop rewarding racist ideology and politics with a public memorial on public property. It is time to write a new story for the new century,” Raskin said.

Last week, a D.C. Advisory Neighborhood Commission voted unanimously to remove his name from the 60-foot Francis Griffith Newlands Memorial Fountain, which technically sits both in D.C. and Maryland, and is on the National Register of Historic Places.

Even though a similar effort was considered six years ago without result, it has gained new life in the months following George Floyd’s killing in Minneapolis police custody in May.

The National Park Service manages the Connecticut Avenue Northwest site, but only Congress can change the name.

As for the company Newlands founded, the Chevy Chase Land Co. said in a recent statement that they would support a “community vote to rename the fountain.”

They said their founder’s “views on race contradict the ideals of our company fabric.”

Robles on refereeing the match with Real Madrid and VAR: dubious episodes are always Interpreted in favor of top clubs
Conte on 4:3 with Fiorentina: impressed with Inter's attack. We didn't have enough balance, we paid for it
Zidane about 3:2 with Betis: real can get better and will. A difficult game, but we believed in winning until the end
Dest said goodbye to the Ajax players and will fly to Barcelona today (Gerard Romero)
Vidal made his debut for Inter in the match against Fiorentina
Barcelona will only consider Zinchenko if Firpo leaves
The referee after VAR for a foul on Jovic removed defender Betis Emerson
Source https://wtop.com/local/2020/08/house-bill-would-remove-white-supremacists-name-from-chevy-chase-fountain/

Leaders to UN: If virus doesn't kill us, climate change will