The Southern California region can expect an extended period of hot weather through early next week, the National Weather Service said.

High pressure building into the region has prompted the weather service to post excessive heat watches and warnings for virtually the entire region. A dramatic warmup is expected Friday, when widespread triple-digit temperature readings are fairly certain for inland areas.

Excessive heat warnings take effect throughout Southern California from late morning to noon on Friday and remain in effect through Monday evening. 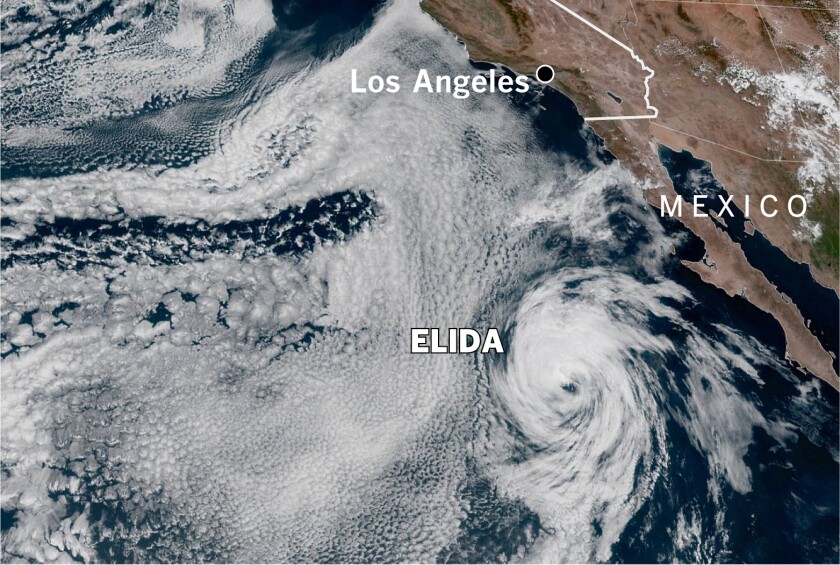 Tropical Storm Elida was about 700 miles south of San Diego in this image from Wednesday afternoon.

Moisture from weakening Tropical Storm Elida, which was churning about 700 miles south of San Diego on Wednesday afternoon, will introduce some clouds and the possibility of precipitation in parts of the area. There’s a slight chance of light showers Thursday morning, and a slight chance of afternoon and evening thunderstorms for interior areas.

Precipitation, if any, would be light, but the risk of dry lightning can’t be ruled out.

More isolated thunderstorms are possible over the mountains and deserts, particularly on Sunday and Monday, when instability and available moisture are expected to increase.

Models suggest that Saturday will be the warmest day for the L.A. area, with temperatures of 105 to 109 in the hottest locations. There won’t be much relief after dark either as overnight temperatures in some foothill areas will not dip below 80 degrees. Coastal areas can expect just enough of a sea breeze to moderate temperatures, partly thanks to ocean water temperatures in the 60s and some patchy shallow marine layer.

Maximum temperatures in the low deserts could sizzle at about 120 degrees, but most areas will be closer to 115. Inland Orange County could see 100-degree readings or higher, and the mercury could climb as high as 110 in the Inland Empire.

The National Oceanic and Atmospheric Administration’s longer term temperature outlooks favor above-average temperatures for Southern California and the Southwest. The precipitation outlook is slightly above normal for Southern California south of Point Conception for Aug. 12 to 18 but is normal or slightly below normal for much of the rest of the Southwest through Aug. 20.

Karasev is scheduled for the young boys-Tirana match in the Europa League
Les Ferdinand: the Decision to take a knee was very powerful, but its impact has decreased. The message is lost
Vidal said goodbye to Barca: Proud to have worn this shirt and played alongside the greats
Sporting renamed the Academy in honor of Ronaldo
Suarez will receive 9 million euros a year at Atletico
Liverpool will not buy anyone else in this transfer window
Semedu will move to Wolverhampton for 35 million euros. Contract - until the summer of 2025
Source https://www.latimes.com/california/story/2020-08-12/hot-weather-is-expected-into-early-next-week-for-the-los-angeles-region