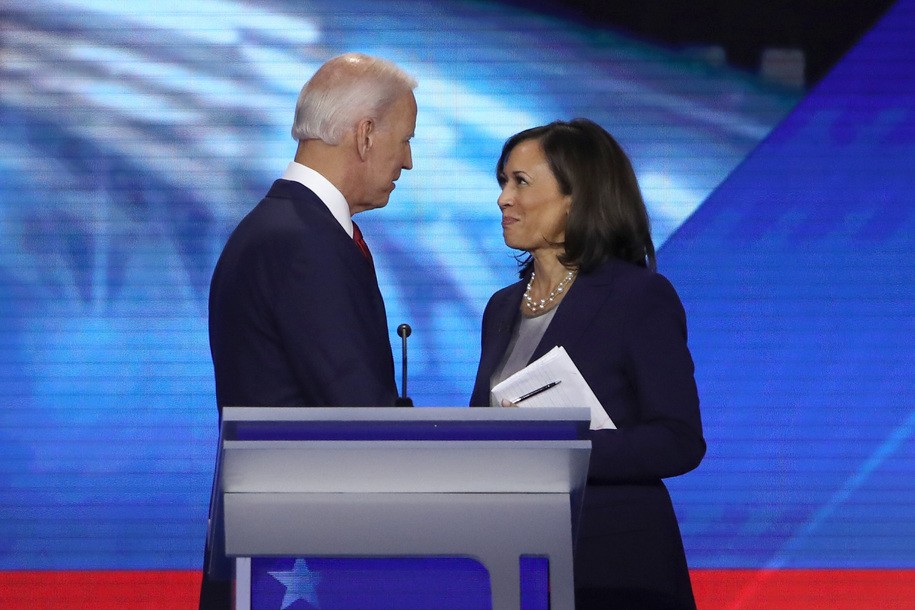 The Trump campaign had its attacks on Sen. Kamala Harris ready to go as soon as former Vice President Joe Biden picked her to be&nbsp;his&nbsp;vice presidential nominee. Only, despite labeling her a “phony” and branding her as a radical leftist,&nbsp;the Trump campaign isn’t so much attacking Harris as it is desperately trying to reframe the race.

Neither Donald Trump nor his campaign has really been able to land a blow on Biden—from Ukraine to “Sleepy Joe” to claims that Biden is experiencing major cognitive decline—so now the strategy is to pivot and try to make this choice into proof that Biden is a radical leftist (ha ha ha ha ha), turning this into&nbsp;a race between Trump and Harris. Harris is, according to&nbsp;a Trump campaign statement, “proof that Joe Biden is an empty shell being filled with the extreme agenda of the radicals on the left.”&nbsp;

“Joe Biden is no moderate,” the statement continues, “and with Harris as his ‘political living will,’ he is surrendering control of our nation” blah blah blah radical mobs, blah blah kill energy jobs, blah blah blah. The policy attacks are basically the same as they’ve always been—the move here is to try to shift attention from Trump vs. Biden, who is winning and has resisted being negatively defined by the Trump campaign, to Trump vs. Harris, who they have a new shot at defining negatively to a general election audience and might be able to drag down using those old favorites, sexism and racism.

They’re so eager to run this play that Donald Trump&nbsp;already tweeted an attack video&nbsp;with the same idea. “Biden calls himself a ‘transition’ candidate,&nbsp;the narrator says, “handing over the reins to Kamala while they jointly embrace the radical left.”

Expect to hear a lot about “Phony Kamala,” both because Trump himself isn’t going to be able to resist the insult to a woman of color and because that’s part of the official message. But the underlying campaign strategy is to try to move on from the white guy by painting him as a puppet of the inherently untrustworthy Black&nbsp;woman by his side. If they can’t make Joe Biden scary to voters, they’ll try to make Kamala Harris even scarier.

Barcelona's Interest in Isak Increased after Koeman's appointment. Larsson has a high opinion of the player (Mundo Seportivo)
Manuel Pellegrini: When you play against Real Madrid and var, it's too much
PSV and Porto are Interested in Barcelona midfielder PUC. He doesn't want to leave the club
Puyol about Barcelona: If we want to win the championship, we need to perform very well
Schalke sacked Wagner. The team has not won the Bundesliga since January
Iacini on 3:4 with Inter: Even a draw would be an unfair result, given how many chances Fiorentina created
Ramos Pro 3:2 with Betis: the Referee tried his best and didn't do anything intentionally
Source https://www.dailykos.com/stories/2020/8/11/1968474/-Here-comes-the-Trump-attack-on-Kamala-Harris-but-it-s-really-about-Joe-Biden

The Great Debate is here!

M. Night Shyamalan has revealed the title and poster for his upcoming movie

Car slams into crowd during donut free-for-all in Seattle

Banged-Up 49ers Make It 2-0 at MetLife, Beating the Winless Giants

For One Food Insecure Family, The Pandemic Leaves 'No Wiggle Room'

In Rural Nebraska, Combating Hunger From The Pandemic Is A Community Effort

Gwyneth Paltrow gets naked for her birthday on Instagram

An Editor’s Note on the Trump Tax Investigation

18 Revelations From a Trove of Trump Tax Records

Pressure is heavier on Trump in debate with Biden

Stream It Or Skip It: ‘Fargo’ Season 4 On FX, Where Chris Rock Plays A Kansas City Gangster Battling For Turf With His Italian Rivals

Rookie Mekhi Becton only Jet to kneel for national anthem

Breonna Taylor's death shocked the nation. In Louisville, many Black people are far from surprised

With Wilpons Set to Cede Control, the Mets End an Era of What-Ifs