Finalizing the adoption of Stephanie Rivero and Ryan Cameron’s two foster sons meant more than providing closure for the Merced family. The couple would finally be able to make medical decisions for the 5-year-old, who has a life-threatening genetic condition and is scheduled for surgery this summer.

But the procedure may have to be delayed as family courts across the state have largely closed because of the coronavirus crisis. The family’s adoption hearing, originally scheduled for April, has been repeatedly pushed back and is now tentatively set for June 27.

“Having a child with significant medical needs and surgery coming up and not being able to make those important decisions for your child is heartbreaking,” Rivero said. “If we don’t have the adoption before then, we can’t be the ones that make the decisions, even though we’re his parents and we’ve done the research. We’re his strongest advocates.”

They are among thousands of foster families in California whose adoption plans have been thrown into chaos with family courts closed because of the coronavirus outbreak. The Times is withholding identifying details about the foster children in this article to comply with privacy laws.

California is home to 55,000 foster children. Most in the foster system are reunited with their families, but about 1 in 10 are adopted every year.

Los Angeles County’s child welfare and public adoption agency is the largest in the nation and the one hit hardest by the crisis. There are about 20,000 foster children in the county, roughly 3,200 of whom cannot be reunited with their birth families and are in some stage of the adoption pipeline. About 1,500 foster children are adopted in the county every year.

Family courts in Los Angeles County, which play a role in every step of the process — from a child being removed from a home to that child being reunited with their family or adopted — faced a lack of resources even before the pandemic. Then courts closed March 19 for nonessential matters, exponentially increasing the backlog. 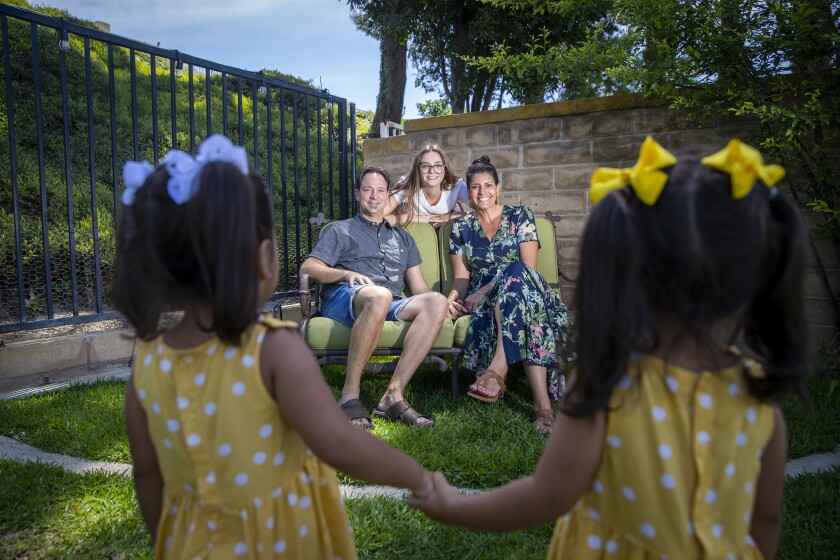 Natalia and Randall Bergman, shown with daughter Jessica, 16, have been foster parents of twin girls since the girls were 3 months old. They were set to adopt the twins in April. Their hearing is now scheduled for 2021.

Natalia and Randall Bergman had an April 7 court date to finalize their adoption of the twin girls they’d fostered for 2½ years. The hearing in a Los Angeles County courtroom was delayed to April 25 because of the coronavirus crisis. Now, it has been delayed until early 2021.

The girls are young enough that they don’t understand the delay. But the Bergmans are devastated. The couple initially decided to foster children after they struggled with infertility. They have raised the girls since they were 3 months old, making a home for them in south Orange County. Their backyard is full of toys — tricycles, push cars and a playhouse — and at night the twins sleep in matching white spindle beds with rose-colored linens.

The couple decided to adopt the girls once it became clear that their birth parents would not be able to raise them.

Under state law, adoption finalization hearings are supposed to take place in person. So when family courts around the state closed for nonessential matters, that left families like the Bergmans in limbo. Currently, in Los Angeles County, eight judicial officers and eight clerks are handling emergency matters, such as removing a child from an abusive household. All other hearings have been delayed.

But the state’s chief justice included adoptions among the hearings that could be held remotely in her response to the coronavirus crisis. A spokeswoman for the Los Angeles County courts said the presiding judge of family courts hoped to increase the number of remote hearings taking place.

“The Presiding Judge of Juvenile, Judge Victor Greenberg, is examining all possibilities to handle every juvenile case, including adoptions, as expeditiously as possible,” spokeswoman Mary Hearn said in a statement. “The Court recently introduced [online] technology to handle some juvenile matters remotely and continues to rollout this technology to other courtrooms.”

Cynthia Billey, director of the foster care adoption program at the Alliance for Children’s Rights, said online technology had been used in a handful of cases in Los Angeles County, including for children who were about to turn 18, families moving out of state and children who faced medical needs that could not wait.

Billey, whose organization has urged Greenberg to consider several efforts to expedite adoptions, is hopeful the number of such hearings increases once the family courts reopen on June 22. “Adoption is important,” she said. “I don’t want them pushed off until January or February.”

One new option the alliance is pursuing with the state’s judicial counsel — the rule-making arm for California courts — is to allow families to sign notarized adoption agreements and then send them to the judges, who could sign the documents in their chambers without a telephone or online hearing with the families and the children. A response is expected in June.

“The hope I’m holding out to families is hopefully they may not have to be waiting until January, February, March 2021,” Billey said. “But some may.”

Foster parents say they are used to being flexible because delays are so frequently part of their experience with the foster care system. But they worry about how the delays in finalizing adoption — the pinnacle of stability — are internalized by children whose lives can be studded with transience, rejection and abandonment.

Megan Vest said her 16-year-old foster son didn’t lash out or react when the family learned that their adoption hearing, initially scheduled for March 27, then May 1, was again delayed until Feb. 8 of next year.

“He’s just so conditioned to being disappointed with the system, if that makes sense,” said the La Habra resident. He has been with Vest and her husband, Matt, for three years; before that, he bounced around foster homes for much of his life, she said.

“I feel L.A. County is neglecting my son right now,” Vest said. “Emotional neglect is what they are doing [to him] right now by putting him off till February. All they need is one judge to do a video chat.”

Vest said she had been trying to remain patient but had grown angry as others complained about how the coronavirus outbreak had changed their lives.

“I see other people crying over beaches being closed, and I’m like, ‘You can’t wait a couple weeks to walk on the beach? Do you know how privileged you are?’” she said. “He thought in March he wouldn’t have to deal with a social worker checking in on him every month.”

The Cameron-Rivero family had been planning a large adoption commemoration in April, including a weeklong trip to Disneyland, with their 5-year-old and his 8-year-old half-brother, whom they also plan on adopting. The amusement park is closed because of the pandemic, but the family still tried to mark the moment.

“We still celebrated the day the adoption was supposed to be,” Rivero said. “We ate cake and talked about how excited we were going to be when we finalized. And then after that, for a whole week we did virtual Disney stuff.”

The parents played YouTube videos of various rides, twisting and tumbling their children in their arms to mimic the movements of the screen. For Splash Mountain, they spritzed them with water from spray bottles. They watched videos of performances and nightly fireworks and made recipes based on signature Disney food such as corndogs from Main Street USA and the peanut butter and jelly pizza from Goofy’s Kitchen.

The activities helped take the boys’ minds off their disappointment over their adoption hearing delay and trip cancellation.

“They were laughing,” Rivero said, “they were joyous, they were having a great time.”

La Liga President: Many try to justify failures on the field by talking about rest and schedule
Rivaldo on Griezmann: I Don't understand why the world champion and multi-million dollar transfer only comes out at the last minute
The Doctor Sociedad: The Youngster from serious injury. We are not currently considering the option of surgery
Klopp made Liverpool Champions. Now it's your turn: the game Showsport
Daughter of the owner of Valencia: This is our club and we can do whatever we want with it. Don't the fans understand?
Manchester City and Chelsea are Interested in Dean
10 years of Suarez's great save: hand saved Uruguay at the 2010 world Cup
Source https://www.latimes.com/california/story/2020-06-03/coronavirus-adoption-delays-2021-foster-care