Harry and Meghan will stop using Sussex Royal this spring

Prince Harry and Meghan will stop using the word "royal" for their brand this spring. The announcement comes just weeks after the couple shocked the world with the announcement that they were stepping aside as working members of the British royal family and will become "financially independent."

The couple had intended to use Sussex Royal for their upcoming nonprofit organization, but a spokesperson said Friday that they will not use Sussex Royal "in any territory post Spring 2020."

"While The Duke and Duchess are focused on plans to establish a new nonprofit organisation, given the specific U.K. government rules surrounding use of the word 'Royal', it has been therefore agreed that their nonprofit organization, when it is announced this Spring, will not be named Sussex Royal Foundation," the spokesperson said in a statement obtained by CBS News.

The decision to drop royal could also affect their current Instagram page, sussexroyal, which has already amassed 11.2 million followers. 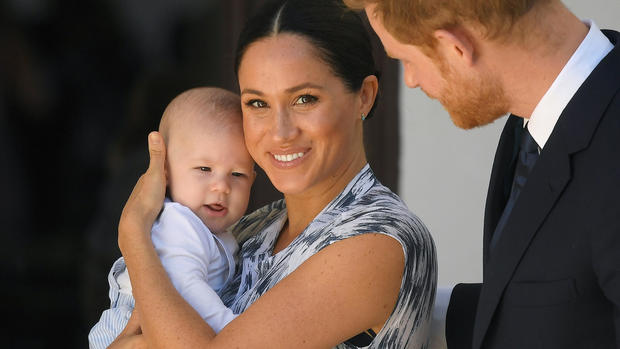 The latest statement from the Sussex spokesperson also states that "trademark applications that were filed as protective measures" have been removed.

When Harry and Meghan married in May 2018, Queen Elizabeth gave them the titles "Duke and Duchess of Sussex," which they will continue to use. As part of their agreement to step back from the royal family, Harry and Meghan agreed to give up their royal titles. "The Sussexes will not use their HRH (His/Her Royal Highness) titles as they are no longer working members of the Royal Family," Buckingham Palace said in a statement.

In a statement released by the couple, they disclosed their revised role will undergo a 12-month review. They also revealed they will have "permission to earn their own income" as well as "the ability to pursue their own private charitable interests."

Queen Elizabeth said in January that she and the royal family were "entirely supportive of Harry and Meghan's desire to create a new life as a young family" and "understand their wish to live a more independent life."

But she said "we would have preferred them to remain full-time working members of the Royal Family."

During a candid conversation last month, Harry opened up about the bombshell decision.

"It was so many months of talks after so many years of challenges," he explained. "And I know I haven't always gotten it right, but as far as this goes, there really was no other option. What I want to make clear is we're not walking away, and we certainly aren't walking away from you."

Harry has openly condemned the media for their treatment of Meghan and last month called the media a "powerful force." In their statement Friday, the couple said the royal family "respect and understand" their wish to live a more independent life as a family, "by removing the supposed 'public interest' justification for media intrusion into their lives."

The couple plan to balance their time between the United Kingdom and North America in a bid to raise their son Archie "with an appreciation for the royal tradition into which he was born, while also providing our family with the space to focus on the next chapter."

Since the announcement, Harry and Meghan have spent most of their time in Canada. Wherever there are, they will still "require effective security to protect them and their son," according to their statement.

Dr. Fauci: ‘I Don’t Understand' Why The Entire Country Isn’t Under Stay-At-Home Orders

Cyber criminals are trying to wreak havoc during global pandemic

Jobs Data Will Be From Way Back When Things Were Normal: 3 Weeks Ago

The Coronavirus Could Spark a Nuclear Meltdown in North Korea

How to Start Your Very Own Indoor Garden From Seeds

This Day in History: April 3

Who Needs Wallpaper When This Fun DIY Exists?

This Michigan Couple Couldn’t Have Friends and Family at Their Wedding. So They Had Cardboard Cutouts Instead

100,000 tourists stuck in New Zealand to leave as rules ease

The 1918 Flu Pandemic Was Brutal, Killing As Many As 100 Million People Worldwide

As China goes back to work, doubts over its coronavirus recovery linger

As China goes back to work, many wonder if the country's coronavirus recovery can be trusted

Looking back at past Nats home openers

This week on "Sunday Morning" (April 5)

Neil deGrasse Tyson Looks To The Stars – Of Comic Books, That Is, In Day-Long Tweetstorm

A waitress couldn't pay her rent, and then a stranger came forward

How US can keep death toll far below the 100,000 projection

Top Chef All Stars L.A. Week 3: Who Was Eliminated?

Mark Levin calls for loosening some restrictions on economy: 'Let's get a little smarter about this'