Fitness club owners in states including Arizona and Michigan are rebelling against the notion that they need to stay closed to curtail the spread of the coronavirus. That's especially the case in states that have allowed bars to reopen ahead of gyms, with some fitness club owners opting to keep their doors open and battle their cases in court, blasting the public health edicts as arbitrary and unfair.

In Michigan, for instance, several gyms in the Detroit area are open for business in violation of an order in effect since March 16. While a local news account described how a Gold's Gym and a Crunch Fitness in Warren, Michigan, were open in defiance of an executive order issued by Governor Gretchen Whitmer, spokespersons for both national chains declined or did not return requests for comment.

Restrictions were loosened statewide for restaurants and stores, but gyms and movie theaters in Southern Michigan were told to hold off on reopening, prompting a lawsuit against Whitmer's gym closures. A federal district court ruled that gyms could reopen last Thursday, but an appeals court at the last moment ruled Whitmer's closure order should remain in place pending a review.

The Democratic governor's office praised the appellate ruling, stating "in the fight against a global pandemic, courts must give governors broad latitude to make quick, difficult decisions. The governor will continue to take the actions necessary to save lives."

But for James Wiese, co-owner of Michigan Crunch Fitness, which runs seven fitness clubs in the Detroit area, Whitmer's decision keeping gyms closed both defies logic and is less-than-clear in terms of how the executive order is enforced. "Gyms are more essential than a bar any day of the week," Wiese said. 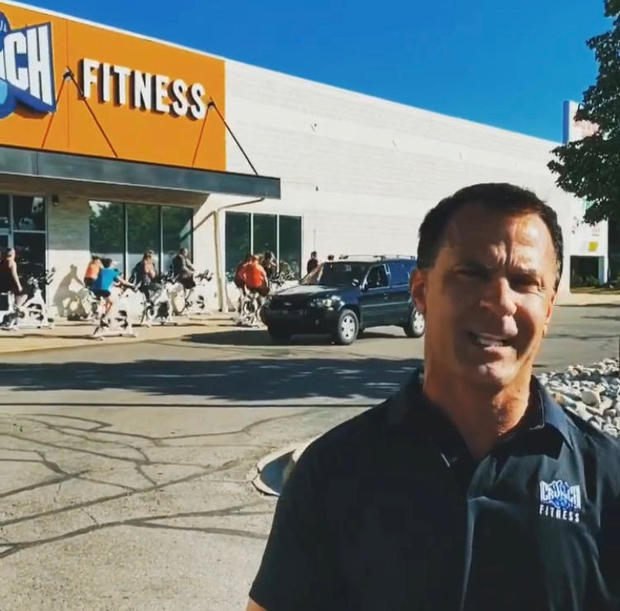 James Wiese, co-owner of Michigan Crunch Fitness, with seven gyms in the Detroit area. "Gyms are more essential than a bar any day of the week," he said. "We're losing well over $1 million a month." James Wiese

Initially in agreement and compliant with Whitmer's order shutting down all but essential business across the state, Wiese said he furloughed about 240 workers and closed shop for three months.

Many of his competitors, however, remained opened, according to Wiese, who complained to local municipalities only to be told the governor's order was not a law but a recommendation that would not necessarily be enforced.

Since reopening last week, three of his seven Crunch facilities have again shut down after being issued citations by local law enforcement. "I don't know what's going to come about, I might have to shut them all down tomorrow," Wiese told CBS MoneyWatch.

Wiese is running his gyms at 50% capacity and with social distancing rules in place, in addition to what he describes as extensive and costly cleaning by his staff. As things stand it's not a sustainable business model.

"We're losing well over $1 million a month," Wiese said, who noted that in addition to reduced traffic, his gyms are not currently offering the services of personal trainers nor allowing drop-ins. "It's really disheartening for us that we have to turn away people."

A similar standoff is taking place In Arizona, where multiple gyms are refusing to heed Governor Doug Ducey's executive order on Monday that they close until at least July 27 to slow the spread of COVID-19. In a complaint filed in Maricopa County court on Tuesday, Mountainside Fitness called Ducey's order "arbitrary and irrational" and seeks to keep its 18 gyms open for their 90,000 members.

Others chose to glean a different meaning from the Republican governor's order. "It is our interpretation that we do not fall under 'gyms' as we are a boutique studio with set class times allowing for full social distancing and space between each student," Radi8 Hot Yoga in Phoenix wrote on Facebook.

Manchester City wants to buy 5 more players this summer. The club is Interested in Lautaro and Felix
West ham midfielder Antonio is the best player in the Premier League in July. He scored 8 goals in 7 matches
Brih is scheduled for the Manchester City – Real Madrid match. Zweier will judge the Juventus-Lyon game
Fulham returned to the Premier League, earned 135 million pounds and destroyed the fairytale of Brentford. Everything was decided by the trick of the defender and a stupid mistake of the goalkeeper
Fabinho: this Liverpool will be remembered forever. The title in the Premier League is special, because we had to wait so long
Tuchel asked PSG to buy Alaba from Bayern. The player wanted to receive 20+ million euros a year
Messi-Casillas: you are an incredible goalkeeper. It was a beautiful rivalry that made you overcome yourself
Source https://www.cbsnews.com/news/gym-owners-question-closing-fitness-centers-while-bars-stay-open/

Hackel: Coroner Dan Spitz contract may be in jeopardy over morgue scandal

Detroit Lions' Jarrad Davis got into great shape, but made an even bigger change mentally

Detroit train station renovation still moving ahead in pandemic: Where it stands