For decades, children have come from all over to ride the Griffith Park carousel.

What often kept them coming back was the friendly man with the big smile who operated the nearly 100-year-old merry-go-round.

Julio Gosdinski, a native of Peru who began working at the attraction as a teenager and became so devoted to it that the owner eventually made him co-owner, died Friday. He was 49.

“He had this magic, this magnetic personality people were drawn to,” said Kei Nguyen, who had known him for years, back to when Gosdinski was a teacher’s assistant at an elementary school in Atwater Village.

Around Atwater, Gosdinski was a familiar face. People remembered him from high school, from holiday events and from summer movie nights where he often volunteered his time. Some had gotten to know him as teenagers, when they worked for him at the hand-painted merry-go-round.

Emerald Guzman, 23, of Elysian Valley began working for him after high school. Gosdinski used to start the shift on sunny mornings by huddling his team next to his galloping horses. He’d buy his workers breakfast burritos or pastries or bring them home-cooked meals prepared by his mom. He’d teach them to have fun with his tiny customers by playing peekaboo and giving out free popcorn and hot dogs.

“It always felt as if he was thinking about us before thinking of himself,” said Guzman, who is now a teacher’s assistant, a job Gosdinski helped her find. 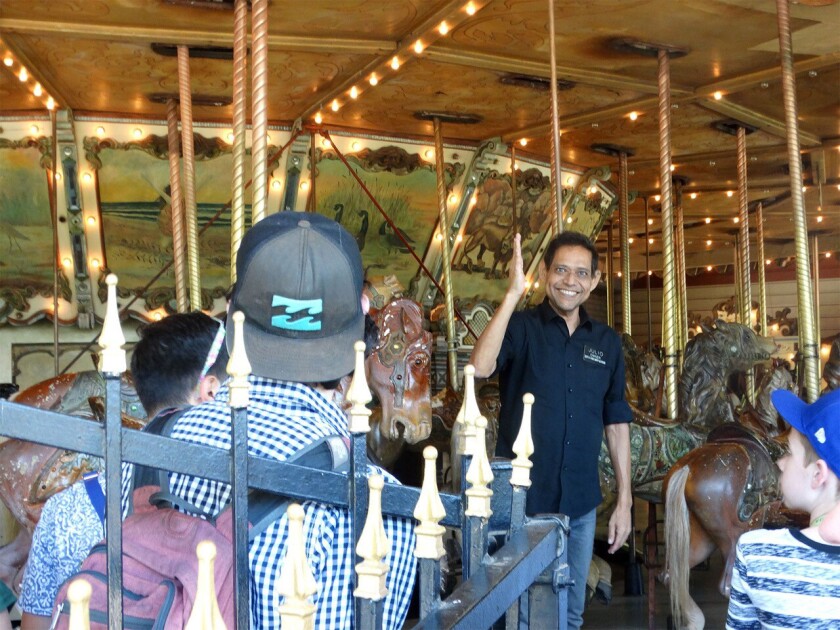 Julio Gosdinski welcomes riders to the Griffith Park carousel, where he worked for three decades.

The blue-eyed man, who some say looked half his age, used to love jumping on and off the carousel mid-ride to impress kids. And if parents or anyone inquired about the history or mechanics of the merry-go-round, his face would light up. He’d guide them on an extensive tour, telling them about the vintage Stinson 165 Military Band organ or how some of his 66 horses, “all jumpers,” date back to 1895.

He’d named a few over the years: A big horse with gold reins was known as Esme, and a feisty one that no one was allowed to ride because it’d instantly break down was El Diablo.

In 2017, Gosdinski recounted his life story to KQED. His journey and close bond with the carousel’s late owner, Warren Deasy, also became part of a film called “Julio’s Dream.”

And Deasy was like a father to him. While other teenagers stuck around for a summer or a few years, Gosdinski loyally worked the ride for about three decades. He and Deasy had a ritual: They’d meet each week for breakfast. When Deasy died in 2011, he left Gosdinski a rare gift: He made him co-owner of the ride. (Partner Rosemary West owns the other half.)

“My brother was devastated to lose Warren,” said Gosdinski-Espinoza. “It also came as a total shock to him that he would leave him such a lovely gift.”

On Saturday, the family struggled to speak about their loss, their voices shaking with each sentence. They said that at home, Gosdinski was affectionate and playful. He took care of his mom and was attached to his dog, a schnauzer mix who sometimes joined him at the carousel. When customers asked for the dog’s name, Gosdinski would tell them: “Princess Angelina Contessa Louisa Francesca Banana Fanna Bo Besca the Third.”

Gosdinski-Espinoza said her brother had not been feeling well for several days. The family was waiting to hear back from the coroner on the cause of death.

In Atwater, those who knew were thinking of ways to honor the carousel man. One neighbor created a fund to help his family.

Gerry Hans, president of Friends of Griffith Park, said the group had recently secured funding to retune the carousel’s organ and fix some of the lights.

“We’ll be dedicating those repairs to Julio,” Hans said.

Guzman, the young woman from Elysian Valley who worked at the ride for four years, was struggling, like many others, to accept that Gosdinski was gone. Due to the pandemic, the carousel is closed, but she planned to walk up to the park on Sunday and find a place to sit next to the galloping horses.

“I want to remember him and say thank you,” Guzman said.

Leeds United have offered Bayern 20 million euros for Nuisance. Clubs in final stages of negotiations
Pep has already spent under 480 million on city's defence, and this week broke the club record for spending on a defender
The APL referees will be asked to soften the hand play. But the League cannot deviate from the rules
Lyon values Aouar over 40 million euros. Arsenal offered 35
Tottenham are not selling Mourinho's merch - because Chelsea still own the trademark rights. But it didn't stop Manchester United
Shomurodov is close to moving from Rostov to Genoa for 8 million euros (Sport Italia)
Pobegalov about 12 cases of covid in Shinnik: I hope we can start training by October 4
Source https://www.latimes.com/california/story/2020-08-08/griffith-parks-beloved-carousel-man-julio-gosdinski-has-died-he-was-49

Using Technology to Tailor Lessons to Each Student

Mexico and the Gods of Corruption

Is It OK to Use Connections to Jump the Line for a Specialist?

Everything coming to and leaving Hulu in October 2020

The Most Important Question in Tonight’s Debate

Watch live: How to stream the Trump-Biden debate on CNN.com

More questions for Lamar Jackson, Ravens after Chiefs bury them in first half and pick up huge win

Most voters say Biden-Trump debates won't move them. Here's why they could matter.

New York City children get to go back to school

Alex Mahon Commits To Reversing Most Of Channel 4’s Coronavirus Content Cuts: “We Can’t Compete By Making Everything Bargain Basement”

'Wouldn't give to a dog to chew': Tennis players complain about new balls at French Open

Covid spurs business to reinvent itself