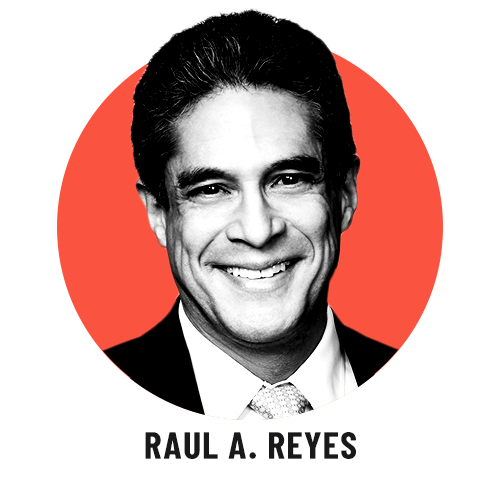 Adios, Goya! That seemed to be the prevailing sentiment on social media after Goya Foods CEO Robert Unanue praised President Trump at a White House ceremony on Thursday afternoon. Speaking at a Rose Garden event, Unanue said, "We're all truly blessed, at the same time, to have a leader like President Trump who is a builder." He compared Trump to his grandfather, an immigrant from Spain who founded the company in 1936. Almost at once, a backlash ensued on social media, under hashtags like #Goyaway and #BoycottGoya.

The boycott of Goya is entirely warranted. Many Latinos are angry at Unanue, and they are sad and disappointed in him, too. His remarks reflect how out of touch CEOs can be to their primary consumers, and to the national mood.

Goya Foods distributes over 2,500 items from throughout Latin America and the Caribbean, and their products are sold everywhere from bodegas to Walmart.

As such, Unanue's comments at the White House's Hispanic Prosperity Initiative show a staggering lack of awareness. His comments about Trump were offensive because Trump is known for scapegoating Latinos and immigrants, the very groups that form Goya's loyal consumer base.

In case anyone has forgotten, Trump began his campaign calling Mexican immigrants "rapists." He abandoned Puerto Rico during Hurricane Maria. He tried to end Deferred Action for Childhood Arrivals, or DACA, the program that protects immigrants brought to the United States as children from being deported. He has insulted prominent Latinos, from judges to journalists to public officials. And the chief architect of his immigration policies (including caging children) is Stephen Miller, who has privately promoted stories from white nationalists.
No wonder that "Goya" has been trending on Twitter. Julian Castro, Alexandria Ocasio-Cortez and Latino advocacy groups have all criticized Unanue's comments. But it is not that they are going after Goya, or that they are determined to take the company down. Rather, they are encouraging Latinos to stand up for the values that they believe in. If that means boycotting products that have been a staple in Latino households for generations, so be it.

What's regrettable about this controversy is that it was unnecessary. Unanue could have attended the White House event as a private citizen, or declined the opportunity to speak. He could have used more measured words to describe how he feels about the president. Instead he committed what amounted to brand suicide, forever linking his grandfather's storied enterprise to a president known for being a birther and a bully.

There is an element of pathos here, too. Latinos have a unique relationship with Goya Foods because Latinos love Goya products. They remind people of their grandmother's favorite recipe or delicious holiday meals. For some immigrants, Goya's products are literally a taste of home. They can be found in virtually every Latino household across the country. So as word has spread about Unanue's remarks, many Latinos have felt a mixture of betrayal and sadness that a beloved brand is now tarnished by an association with Trump. This is a boycott that is rooted in sadness as much as it is rooted in anger and outrage.
In an appearance on Fox & Friends on Friday morning, Unanue defended his remarks, calling the backlash to his comments "suppression of speech." But no one is suppressing his speech; his words are being widely disseminated in Latino communities. Unanue also noted that he participated in nutrition initiatives and Hispanic Heritage Month celebrations with the Obamas. The Obamas, however, are a far cry from the Trumps. Barack Obama was never impeached. Michelle Obama never wore a jacket that said, "I really don't care. Do U?" to visit the US-Mexico border. In contrast, Trump has missed no opportunity to demonize immigrants.
True, Goya Foods runs a program called "Goya Gives" and the company has donated millions of pounds of food worldwide during times of natural disaster and need. In fact, the Goya website features a video showing how the company is responding to the Covid-19 pandemic. Those are invaluable efforts, for sure. Yet Unanue apparently passed on reiterating to the president how hard the pandemic is hitting Latinos, who have suffered disproportionately during this health and economic crisis. Instead he offered him the highest praise at a time when Latinos are literally dying because of the administration's negligence in not acting sooner on the coronavirus threat.

Unanue simply doesn't get it. By heaping praise on President Trump, he has undermined his own business and profoundly disrespected his Latino customers.

Thomas Tuchel: If both legs were intact, you could have seen my 40-meter sprint
PSG saved Tuchel's pet: Choupo-moting got everyone for free, managed not to score from a centimetre, and now pulled Paris to the semi-finals of the Champions League
Gian Piero Gasperini: The worst part is that we were so close. I can only thank the guys
Neymar was the player of the match Atalanta-PSG. He gave an assist
ПС PSG suffered through the entire quarter-final and turned it over in 149 seconds. Lifted the Italian curse and went so far in the Champions League for the first time in 25 years
ПС PSG's pain was transformed into happiness: in three minutes, the suffering stars turned into celebrating kings
The club from Italy won't win the Champions League for the 10th year in a row. This is an anti-record
Source https://edition.cnn.com/2020/07/11/perspectives/goya-boycott-robert-unanue/index.html?utm_source=feedburner&utm_medium=feed&utm_campaign=Feed%3A+rss%2Fcnn_latest+%28RSS%3A+CNN+-+Most+Recent%29