(CNN)Seraphina Harrell, a little girl who received national attention because the surrogate who gave birth to her had refused to have an abortion, has died.

Seraphina passed away July 25, a few weeks after her eighth birthday. In 2012, when Crystal Kelley, Seraphina's surrogate mother, was halfway through her pregnancy, an ultrasound showed she had multiple severe birth defects. The couple who hired Kelley to carry their baby offered her $10,000 to have an abortion.

Kelley refused and moved from Connecticut to Michigan, where according to that state's law she would be the baby's legal parent and not the couple who hired her. Soon after Seraphina was born, the Harrell family in Massachusetts adopted her with Kelley's blessing. 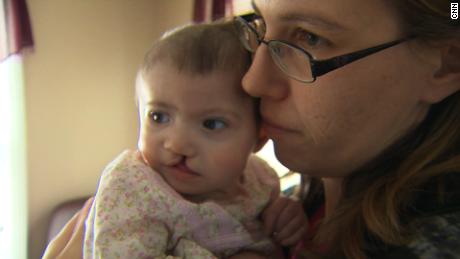 The conflict between Kelley and the couple that hired her drew national attention and marked a turning point for surrogacy.

Eight years ago, agencies and lawyers who arranged gestational surrogacies sometimes failed to make sure surrogates and hopeful parents were on the same page about important issues, such as whether or not to terminate a pregnancy if the fetus was found to have abnormalities.

"People heard about this case, and they got scared about skipping steps. That's good for the industry," Brisman said.

In recent years, the use of surrogates has risen steadily. The use of gestational carriers almost tripled from 2007 to 2016, according to the US Centers for Disease Control and Prevention.

On the whole, surrogacy agencies and lawyers have become more careful about making sure surrogates and couples agree ahead of time on crucial questions, according to Brisman.

"What happened in this case is less likely to happen today. It could still happen, but it's less likely," Brisman said.

During her eight years Seraphina taught those who knew her about living a happy and full life despite physical disabilities.

"What I heard over and over from so many of her doctors was they could never imagine that someone with Seraphina's level of need could do as well as she did or be as joyful as she was," said her mother, Rene Harrell.

Seraphina was born with heterotaxy syndrome. Many of her internal organs, such as her stomach and liver, were in the wrong place. She had multiple heart defects and two spleens, neither of which worked properly.
She also had and a brain malformation called holoprosencephaly, where the brain fails to completely divide into distinct hemispheres.
During her short life, Seraphina had three heart surgeries and countless other more minor surgical procedures. She died in the hospital "following a combination of complications from a needed surgery and infection," according to her obituary.

"What drove the conflict when Crystal was pregnant with her, was whether or not she'd have a meaningful life. And I think without hesitation, the answer to that question is yes, she did. Seraphina had a very, very meaningful and happy life," Harrell said.

Seraphina could only speak a few words, but learned American Sign Language. She couldn't walk, but mastered her wheelchair.

"She could get herself around in a power wheelchair like nobody's business," Harrell said.

"She'd sign it and always add a little kissing sound," her mother remembers.

"She was so loving. If you looked sad, she would comfort you. If you got even the slightest little poke, she would sign 'sorry' and then kiss your boo-boo," Harrell said. "When her baby cousin cried, she would sign 'Baby, cry, Mama, milk.'" 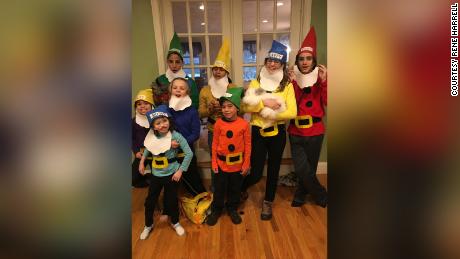 Oct. 31, 2018 -- Seraphina Harrell and her 7 older siblings who designated her Bossy Dwarf for her Halloween costume.

At Halloween, Seraphina's seven older brothers and sisters dressed up as the seven dwarves and invented a new dwarf name for Seraphina: Bossy Dwarf.

"She had the most confident, self-assured personality, and she told everyone what to do," Harrell said.

Serpahina had favorite things to do with each of her brothers and sisters, some of whom also have disabilities.

"Nora and Nathan read to her. Laney painted her nails. Derecc played Darth Vader wars. She fought with the nine-year-old twins. Clare was her true playmate, because even though she is 18, in practice she and Seraphina were both around three, so they liked the same things," Harrell said.

"They all miss her terribly. She was the centering part of our family. She was our heart and soul," Harrell said.

"For the eight years she lived she had she had a full life," said her father, Thomas Harrell. "She had a lot of joy in her life and gave a lot of other people joy in ways that sometimes weren't expected."

Totti visited a Lazio player who came out of a coma after 9 months
Carlo Ancelotti: Seamus Coleman is on a par with Ramos, Terry and Maldini
Mainz have sacked coach Baerlocher. The players went on strike because of the removal of the forward Salai
PSV for 9 million euros signed the defensive midfielder of Toulouse sanghar. They were Interested in Spartak
In the Premier League now give a penalty for almost any hit of the ball in the hand in the penalty area. Neither the players, nor the coaches, nor, it seems, the referees themselves like this
Granada's sponsor posted a picture of Joao Felix's heat map in the form of a penis after 1-6 with Atletico. Andalusians demand an apology
Safonov, Chalov and Magkeev were called up to the Russian U21 team for the matches against Estonia and Latvia
Source https://edition.cnn.com/2020/08/04/health/seraphina-surrogate-death/index.html?utm_source=feedburner&utm_medium=feed&utm_campaign=Feed%3A+rss%2Fcnn_latest+%28RSS%3A+CNN+-+Most+Recent%29

Fighting Between Armenia and Azerbaijan Risks Drawing in Bigger Powers

Man killed in dispute over line at Michigan haunted house

Desk shortage forces parents, students to get creative at home

How to watch the first presidential debate between Trump and Biden

The only debate moderator to return, Fox's Wallace preps

Baseball Made It, So Far, Through A Pandemic. Football Hopes To Follow.

Building Your Own AngelList: 4 Expert Tips on How to Network to Find Investors for Your New Business

Paul Pierce goes too far with ‘scared of’ LeBron James theory: ‘Shut up’

A Report on Trump’s Taxes Reverberates Ahead of First Debate

2 new wildfires break out in California, burning thousands of acres ‘with a dangerous rate of spread’

Fauci Calls It ‘Very Concerning’ for Florida To Allow Bars, Restaurants To Open at 100 Percent

Square Just Made Getting Paid Much Easier for Entrepreneurs

Truth About Nicole Kidman And Keith Urban Getting Botox Treatments Together

Taylor Swift tops Whitney Houston's record for most weeks at No. 1 on the Billboard 200 chart

Bayern feeling effects of storied season as fixtures pile up

Most Americans still struggling financially due to pandemic, study finds

Select venues in D.C. will get to host live entertainment through the end of October