America must unite and speak out loudly against systemic racial injustice or "we're not going to have a country to unite in," Fox News political analyst Gianno Caldwell urged Friday.

Appearing on "America's Newsroom" with host Sandra Smith, Caldwell said that nationwide protests over the death of yet another unarmed black man – 46-year-old George Floyd – at the hands of law enforcement indicate that "for many African-Americans the pressure cooker hasn't just spilled over; the top is shattered in a thousand pieces."

On Thursday evening, riots led to the burning of a police precinct in Minneapolis, Minn. and the arrest of more than four dozen people in New York City. 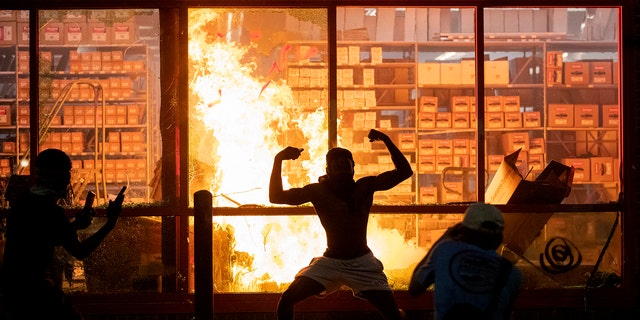 A man poses for photos in front of a fire at an AutoZone store, while protesters hold a rally for George Floyd in Minneapolis on Wednesday, May 27, 2020. . (Carlos Gonzalez/Star Tribune via AP)

In Louisville, Ky., at least seven people were shot after between 500 and 600 protesters took to the streets over the fatal shooting of 26-year-old EMT Breonna Taylor. Taylor was shot by narcotics detectives after they entered her apartment with a “no-knock” search warrant. No drugs were found in the home. Louisville Metro Police said officers were returning fire after Taylor’s boyfriend shot at them.

According to the Minneapolis Police Department's Internal Affairs, 44-year-old Chauvin already had almost two dozen prior complaints filed against him.

"It reminds me of when the 13th Amendment was ratified and slavery was abolished and a lot of the Confederate soldiers became police officers and judges, thereby disenfranchising African-Americans from true justice," Caldwell pointed out. "This is another situation which reminds a lot of us of that same trauma back then."

"I had an opportunity to speak to my grandfather today: James Earl Williams. It's his…76th birthday. He grew up in Helena, Arkansas, and he got into many altercations with the Klan there. That same trauma that he experienced many years ago flows through my blood as well," he told Smith.

"I know there [are] a lot of great people who aren’t bigoted, they’re not racists who are watching right now," he directed to viewers. "And, I want to tell you: you have to use your platform. You have to speak out against these injustices. None of us can be quiet while this is going on."

"If we don’t unite today, we’re not going to have a country to unite in," Caldwell concluded. "We have to bring justice to this situation and it must be swift."

Zidane wants to see Mane at Real Madrid, but the club cannot afford this transfer
Manchester United and Manchester City have made inquiries about Griezmann. Barcelona does not want to let him go
Alaba and Coulibaly, among the purposes of the transfer of Guardiola. He wants to start rebuilding at Manchester City
The new Chelsea uniform is inspired by London tailors. With the logo Three, Lampard's team immediately missed out on three from West ham
Hakimi on racism: Everyone should talk about it, not just the players. Everyone needs equal rights
Zidane on La Liga: there are six finals Left. We are fine, but it doesn't mean anything
The drunk at the party in honor of the transition to Barca was crying with happiness on his father's shoulder
Source https://www.foxnews.com/media/gianno-caldwell-george-floyd-death-police-injustice