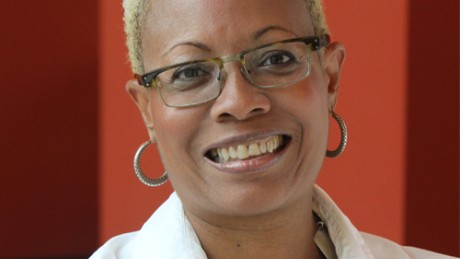 But several recent, earlier steps brought us to this place.

First May 25: On that day, George Floyd was killed by four police officers in Minneapolis. They have each been fired, but so far only one, Derek Chauvin, has been charged -- with third-degree murder and second-degree manslaughter. Benjamin Crump, the attorney for the Floyd family, said he anticipated the other three would be charged before Mr. Floyd's funeral next Tuesday.
Yet none of this would have happened without the bravery of a teenager -- 17-year old Darnella Frazier -- our warrior princess. The nation owes her a debt of gratitude.

The sheer act of filming this fatal episode inflicted trauma on this young woman, yet she persisted. She recorded the approximately 10-minute video in a single stretch. Why was that significant? Because too often white Americans hear about a police shooting of an unarmed black man, woman, or child and begin by asking: what did the dead black person do to provoke the police?

This time we saw the beginning, the during and after. There were no excuses anyone could come up with. (Of course, a significant exception here is the Minnesota police union chief, whose repulsive comments tell their own cynical story; I will not dignify discussion of them in this space.)
We heard Floyd say "I can't breathe." We saw him in handcuffs and we saw his body appear to go limp. We saw the former Officer Chauvin with his knee on Floyd's neck and his hands in his pockets. (By the way, who keeps his hands in his pockets if he fears for their life?) We saw the three other police officers doing nothing to deescalate the situation, making themselves complicit in his killing.
On Monday evening President Donald Trump made the fateful decision to send law enforcement to put down a gathering of peaceful citizen protesters in Washington, with rubber bullets and tear gas, which was covered live, on split-screen news reports while the President gave his press conference. He wanted a photo-op -- to walk to St. John's Episcopal Church (without invitation or permission from its leadership I might add) and hold up a Bible, upside down. These actions, I predict, will prove to be the dumbest things he will ever do for what came after them.
They gave the presumptive Democratic nominee, former Vice President Joe Biden, the national stage the next morning and an opportunity to look presidential. I say that as someone who has gone on the record as not being a fan. But Biden talked about serious police reform and ending systemic racism. I have to give that to him. He looked like a leader and he oozed empathy, which stood in stark contrast to our narcissist in chief.
But the real shocker came Tuesday evening: Trump's behavior caused former President George W. Bush to speak out, issuing a statement with his wife, Laura Bush.
Yes. That George W. Bush. The man famous for countless black deaths that occurred on his watch almost 15 years ago, due to Hurricane Katrina, because his administration could not handle a natural disaster in a single state. That George W. Bush has decided to be on the right side of history. And this is quite telling of the moment that we are in. George W. Bush is asking "How do we end systemic racism in our society?" He says we need to listen to those on the ground dealing with this. And he's right.
2020 means all Americans are deciding whether to be on the side of the race-baiting President, or the American people who are protesting to make our democracy inclusive for black Americans.

George W. Bush made the right choice. As he told us Tuesday: "Achieving justice for all is the duty of all."

Which side will you be on?

Messi has given 20 assists in La Liga. This is the best result of the tournament in 11 years
Chelsea lost by at least 3 goals in the Premier League for the first time in 11 months
Messi scored 20+20 points for the season in the League and repeated the achievement of Henri. In the XXI century, only they did it
Legia won the Polish championship for the 4th time in five years. It repeated the League record for titles (14)
Lazio has lost 3 matches in a row and can concede 2nd place in Serie A if Atalanta wins against Juve
A Parma employee has a coronavirus. The team is isolated on the base, but will continue to play in the championship
Kalidou Coulibaly: Napoli is not going to Barcelona as tourists. We are able to give battle
Source https://edition.cnn.com/2020/06/03/opinions/george-w-bush-steps-onto-the-right-side-of-history-brown/index.html?utm_source=feedburner&utm_medium=feed&utm_campaign=Feed%3A+rss%2Fcnn_latest+%28RSS%3A+CNN+-+Most+Recent%29

J.R. Smith told to stop ‘exposing too much s–t’ in NBA bubble

Pediatrician: The truth about reopening schools during Covid

A critically endangered gorilla is about to be a mom, and she's using a doll for practice

Record Coronavirus Cases Reported, As US Stands At A Recovery Crossroads

Masvidal finally gets title shot on short notice at UFC 251

Puerto Rico questions Spain’s legacy as statues tumble in US