The National Guard’s top general on Sunday said Guard units in nearly half of U.S. states have been mobilized to help major cities deal with riots sparked by the death of Minnesota man George Floyd, as they braced for what could be another night of destructive violence.

General Joseph Lengyel, Chief of the National Guard Bureau, said some 16,000 additional Guard troops have been deployed to 24 states and the District of Columbia in response to civil disturbances.

Floyd died Monday after a white Minneapolis police officer pressed his knee on Floyd’s neck. The officer has been charged with third-degree murder and second-degree manslaughter; he and three other officers were fired from the force after video of Floyd’s death emerged. 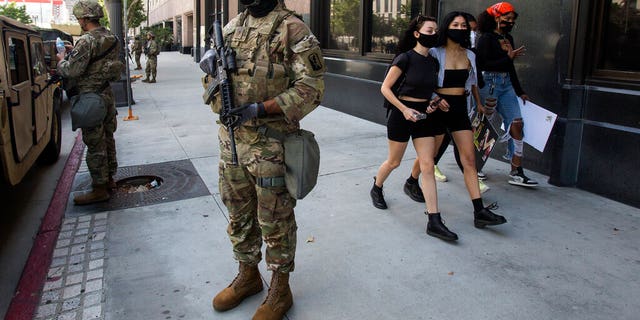 People walk by as a member of the California National Guard stands watch Sunday, May 31, 2020, in Los Angeles.  (AP)

The latest deployment brought the total number of deployed National Guard members to about 62,000 across the country. Other Guard members already had been deployed to assist with their governments’ COVID-19 relief efforts.

The Guard announced in a news release that it expected the civil unrest response mission to grow as governors assess each situation in their states.

The deployment came as riots erupted from demonstrations in cities from San Francisco to Boston protesting the death of Floyd. People robbed stores in broad daylight in Philadelphia and Santa Monica, California, and a driver sped a semitrailer toward a massive crowd of people assembled on a highway in Minneapolis -- but remarkably, there were no initial reports of anyone hurt aside from that driver.

In neighboring St. Paul, thousands gathered peacefully in front of the state Capitol, pledging to keep up the protests.

BUILDINGS AROUND WHITE HOUSE BOARD UP, PROTECT VALUABLES AMID POSSIBILITY OF MORE PROTEST VANDALISM

The scale of the protests, spanning from San Francisco to Boston and unfolding on a single night, rivaled the historic demonstrations of the civil rights and Vietnam War eras.

More than two dozen mayors and governors have imposed curfews, a level not seen the unrest following the 1968 assassination of the Rev. Dr. Martin Luther King Jr., The New York Times reported.

In Indianapolis, two people were reported dead in bursts of downtown violence, adding to deaths reported in Detroit and Minneapolis in recent days.

Vandals defaced buildings in cities across the U.S., from the facade of St. Patrick's Cathedral in New York to the historic Hay-Adams hotel near the White House. Some of Floyd's gasped last words — "I can't breathe" — were repeated, alongside anti-police messages.

Crews near the White House worked to replace windows that had been shattered with large pieces of wood. Buildings for blocks were marked with graffiti, including curses about Trump. Shattered glass still covered the sidewalks. The damaged buildings included the Department of Veterans Affairs, directly across the street from the White House.

Fox News Lucas Tomlinson and The Associated Press contributed to this report.

Dimitar Berbatov: Earlier it was about the championship of Manchester United, now it is about the top 4
Zidane wants to see Mane at Real Madrid, but the club cannot afford this transfer
Manchester United and Manchester City have made inquiries about Griezmann. Barcelona does not want to let him go
Alaba and Coulibaly, among the purposes of the transfer of Guardiola. He wants to start rebuilding at Manchester City
The new Chelsea uniform is inspired by London tailors. With the logo Three, Lampard's team immediately missed out on three from West ham
Hakimi on racism: Everyone should talk about it, not just the players. Everyone needs equal rights
Zidane on La Liga: there are six finals Left. We are fine, but it doesn't mean anything
Source https://www.foxnews.com/us/george-floyd-cities-brace-riots-national-guard-troops-mobilize

Australia Thought the Virus Was Under Control. It Found a Vulnerable Spot.