Friday night owls. Hanauer: Trickle-downers who gave us homeless crisis claim to have the solution 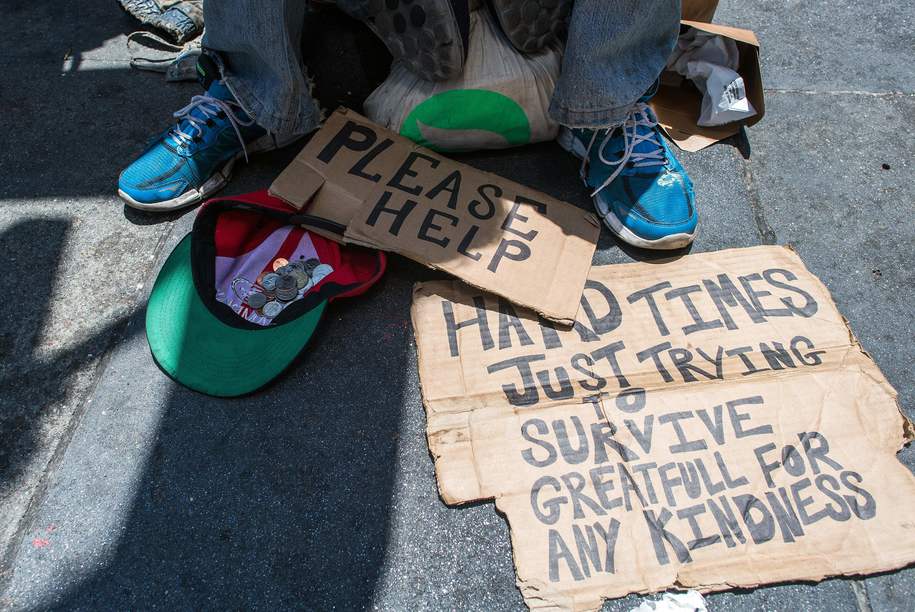 Andrew Loy begs along a sidewalk in downtown San Francisco in 2016.

At The Nation, Nick Hanauer writes—Trickle-Downers Created the Homelessness Crisis. Now They Want You to Believe They Can ‘Solve’ It:

Tonight, in my hometown of Seattle—one of the wealthiest cities in the wealthiest country the world has ever known—thousands of homeless people will huddle for warmth in their cars or in tents or on the streets, as thousands more crowd onto mats and cots at emergency shelters. And Seattle’s no outlier. In New York and in Los Angeles and in cities and towns from coast to coast, more than half a million Americans will go to sleep homeless, 40 percent of them unsheltered. And that’s just on any given night: Altogether, an estimated 3.5 million Americans—including 1.25 million children—will suffer one or more bouts of homelessness over the course of the coming year.

But even as city leaders struggle to address this shameful crisis, others are working to weaponize it in a coordinated campaign of lies, hate, and fear. In fact, some of the same trickle-downers whose policies help create homelessness are spending millions of dollars vilifying it as a disease peculiar to Democratic cities—with right-wing media, corporate lobbies, and the president himself aggressively leading the way. “We have people living in our best highways, our best streets, our best entrances to buildings, where people in those buildings pay tremendous taxes,” President Trump angrily complained in September, while blasting California Democrats for preventing police from cracking down on homeless people. In Trumpworld, the layabouts in America’s tent cities don’t need costly public investments in affordable housing and social services. They just need a little tough love: Enforce the vagrancy laws, bulldoze their encampments, and incarcerate the repeat offenders. And if cities want more affordable housing, then just let the free market do its magic: Rip up all the housing regulations—even those that protect existing tenants, the environment, and workers’ rights—and we’ll make America’s cities great again!

Trickle-downers argue that the progressive values and policies of America’s cities are the cause of homelessness, but that confuses correlation with causation. It’s about as rational as arguing that progressive policies “cause” skyscrapers or hot-dog stands. In truth, Trump and his allies don’t want to improve municipal housing policy; they want to scapegoat blue cities for a social disaster that was always the inevitable outcome of decades of failed economic orthodoxy.

America’s major metropolitan areas might sometimes seem like worlds unto themselves, but they aren’t self-sufficient city-states, immune to all forces beyond their borders. The housing crises in cities like Seattle, New York, and San Francisco are inextricable from federal policy. [...]

“I am convinced that imprisonment is a way of pretending to solve the problem of crime. It does nothing for the victims of crime, but perpetuates the idea of retribution, thus maintaining the endless cycle of violence in our culture. It is a cruel and useless substitute for the elimination of those conditions—poverty, unemployment, homelessness, desperation, racism, greed—which are at the root of most punished crime. The crimes of the rich and powerful go mostly unpunished.”
~~Howard Zinn, You Can't Be Neutral on a Moving Train: A Personal History of Our Times (1994)

President Trump has taken to joking over and over again about being president way past the 8 year limit.

In Nevada just now, he said there is a "distinct possibility" that he will remain in office in 2028, when the Olympics will be held in the U.S.

As my colleague Stephen Wolf says: “This is not a joke, it's a threat”—MB

At Daily Kos on this date in 2004—The legacy of McCain-Feingold:

Campaign Finance Reform. It was the ultimate political paradox. While Republicans held a 3x fundraising lead from hard-dollar donations, Democrats had parity in unregulated soft-dollar donations.

Yet Democrats voted for it, trapped between their support for good government and their addiction to soft dollars. Meanwhile, the GOP, who apparently had the most to gain, fought it tooth and nail.

Now, the big Ds (DNC, DCCC, and DSCC) face huge money disparities vis a vis their cash-flush GOP counterparts. Bush will have two to three times as much money as our Democratic nominee. So by winning, and by pushing good government, Democrats lost, right?

On today’s Kagro in the Morning show: Trump installs Russia denialists Richard Grennell and Kash Patel at ODNI. Lots of guest voices today: Eric Posman on NC-Sen; the LongLeafPineSlate on NC everything else; Serena Blaiz on ending Section 215 surveillance.

Dr. Fauci: ‘I Don’t Understand' Why The Entire Country Isn’t Under Stay-At-Home Orders

Cyber criminals are trying to wreak havoc during global pandemic

Jobs Data Will Be From Way Back When Things Were Normal: 3 Weeks Ago

The Coronavirus Could Spark a Nuclear Meltdown in North Korea

How to Start Your Very Own Indoor Garden From Seeds

This Day in History: April 3