To honor the frontline workers who have been risking their lives for months during the coronavirus pandemic, France celebrated Bastille Day by giving them "historic" pay raises. The country hosted scaled-down celebrations honoring health care workers during the national holiday on Tuesday as its partial lockdown continued.

While health care workers around the world have been praised as heroes during the pandemic, many have demanded more than just nightly clapping. Workers in France sought pay raises, staff increases and increased funding for hospitals in their negotiations.

"This effort is first of all a recognition for those who, applauded every evening by our fellow citizens, have been on the front line in the fight against this unprecedented epidemic," Castex tweeted. "Everyone knows their sense of duty and their selflessness."

Laura Rezé, a health care administrator from Paris, said she will see her wages increase by about 183 euros, or about $208, a month.

"It doesn't make a huge overall difference, but it's better than nothing," she told CBS News on Tuesday. "It feels good to somewhat feel our work is being recognized."

"This is definitely progress. We've been striking and asking for our demands to be met way before COVID-19 started," she added. "I just wish it didn't take a pandemic for us to be seen and heard."

Officials canceled the traditional Bastille Day parade on the Champs-Élysées in Paris due to the pandemic. In its place, the city hosted a military parade on the Place de la Concorde honoring doctors, nurses and other hospital workers.

The parade featured a traditional show by the French Air Force Aerobatic Team. According to a government press release, several thousand invited audience members, including the families of health workers who died during the pandemic, watched the events from socially-distanced seating. 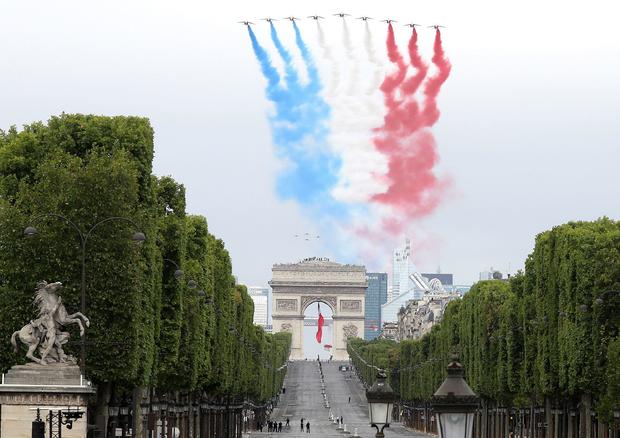 Officials from four nations that took in French patients — Austria, Germany, Luxembourg and Switzerland — were also invited to watch.

In a blog post about Bastille Day, Macron said that he wanted to pay a "vibrant tribute" to the health care professionals in all sectors who have enabled public, social and economic life to continue. He praised their dedication, tenacity, courage and solidarity.

After the ceremony, thousands of health care workers and yellow vest activists protested in Place de la Bastille. They demanded better contracts and increased public funding for health care, but were met with tear gas by police.

France has over 209,000 confirmed cases of coronavirus and over 30,000 deaths since the start of the pandemic, according to Johns Hopkins University. But the country has mostly recovered, seeing a significant decline in daily cases since its peak in mid-April.

Sanchez finished the match against Bayer, despite the injury
Solskjaer is the fifth coach with whom Manchester United reached the semi-finals of the European Cup
Manchester United are set to buy Sancho this summer despite Borussia's claim that he is staying
Shirokov beat the judge at an Amateur tournament: promised that # # # # # [vdarit] for a red card-and # # # # # [vdarit]
Brunu has scored 11 goals in 20 games for Manchester United. 7 of them were penalties
Lukaku has scored in 9 consecutive Europa League games. This is a tournament record
Konstantinos Tsimikas: Liverpool is the biggest club in the world. I supported them as a child
Source https://www.cbsnews.com/news/france-gives-health-care-workers-historic-pay-raises-for-bastille-day/

Denial of responsibility! The World News is an automatic aggregator of the all world's media. In each material the author and a hyperlink to the primary source are specified. All trademarks belong to their rightful owners, all materials to their authors. If you are the owner of the content and do not want us to publish your materials, please contact us by email ab[email protected]. The content will be deleted within 24 hours.

The Spin: Looting in Chicago and the political blame-game | Economic fallout from D.C. stalemate over COVID relief | Campaign finance loophole

The mail-in voting mess and other commentary

Biden's 'diversity,' 'Are you a junkie?' gaffes ignored by Sunday morning news shows

Stream It Or Skip It: ‘We Summon the Darkness’ On Netflix, A Satanic Panic Horror Comedy With a Helluva Twist

Protesters met with jeers by crowd with guns in Nevada city

Why Joe Biden is in trouble

Stephen Curry Has ‘Major FOMO’ in Life Outside the N.B.A. Bubble

Trump abruptly escorted out of White House press briefing, returns to say there was a 'shooting' outside

Alabama parents charged in death of child left in car

Trump abruptly pulled from briefing after shooting outside White House

Hiker rescued 6,200 feet up mountain after 6-foot boulder rolled onto him

‘The Amber Ruffin Show’ Will Include “The Best Parts Of Late-Night”; Host Talks Balancing Her Peacock Show And ‘Late Night With Seth Meyers’

Trump’s Executive Order About U.S.-Made Drugs May Not Enhance Public Safety the Way It Should

Quarantine Envy Got You Down? You’re Not Alone

Stelter: Trump has taken up residence at his own Potemkin Village

Bucks’ Antetokounmpo to miss game after having oral surgery

Start-ups braced for the worst, but the worst never came.

‘He better pick a Black woman’

No Ted Cruz, even a magic money tree doesn't solve all the problems

Detroit Tigers doubleheader vs. Cardinals at Comerica Park postponed due to COVID-19

Trick-or-treating is in doubt this year, so Halloween candy is coming early

‘Last Chance U: Laney’ Is About College Football, Sure, But It Also Doubles As A Study of The Impact of Gentrification in Oakland

Damian Lillard dunks on Skip Bayless after rip job: ‘You a joke’

Sasse hits back at Trump, says he 'never asked' for his endorsement

After decades of concealing his true self, this 90-year-old grandfather came out as gay during the pandemic

Motorcylist offered witness $100 to not call police after crash: police

Back to school shopping: Best deals and sales

What Cameron Diaz (and Ellen Pompeo) don't need to explain