Majorities of Wisconsin voters rate the economy negatively and are concerned about coronavirus.  That helps explain Democrat Joe Biden’s gains in the presidential race, in a Fox News Poll of Wisconsin registered voters released Wednesday.

Biden has a 9-point edge over President Donald Trump, 49-40 percent.  That’s up from a 5-point advantage in January, and is outside the poll’s margin of sampling error.  Another 11 percent are uncommitted. 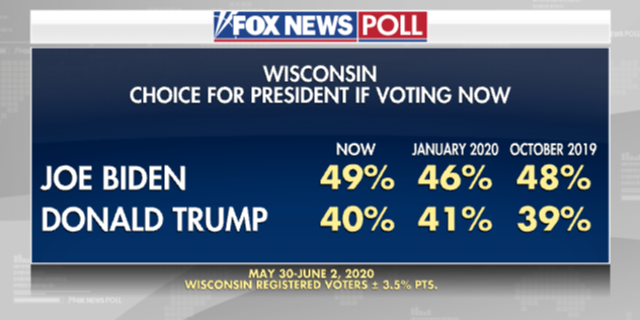 Overall, more voters trust Biden to do a better job handling coronavirus (+14) and race relations (+22).  Trump is preferred over Biden to handle the economy (+3 points).

The president receives some of his highest support from white men without a college degree (+19 points), white evangelical Christians (+29), and self-described very conservatives (+81).

Voters extremely interested in the election give Biden a 15-point lead over Trump (55-40 percent).

In addition, more Biden supporters (71 percent) than Trump supporters (63 percent) are extremely motivated to vote in the election. 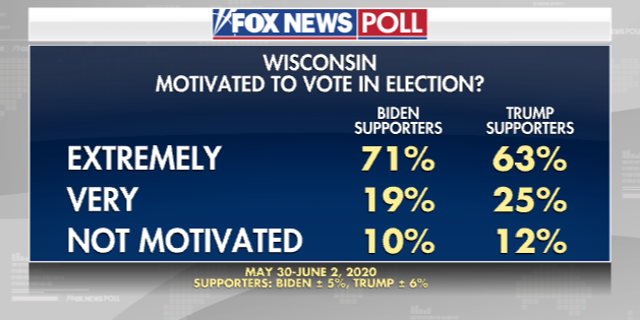 By an 8-point margin, more have a favorable (52 percent) than unfavorable (44 percent) view of Biden.  Views of Trump are net negative by 12 points (43 favorable, 55 unfavorable).

In 2016, some 64 percent of Wisconsin voters had an unfavorable view of Trump.  However, 21 percent of those who disliked Trump still voted for him -- today, just 2 percent who dislike him support his reelection.

Trump won Wisconsin by 22,748 votes, less than one percentage point. 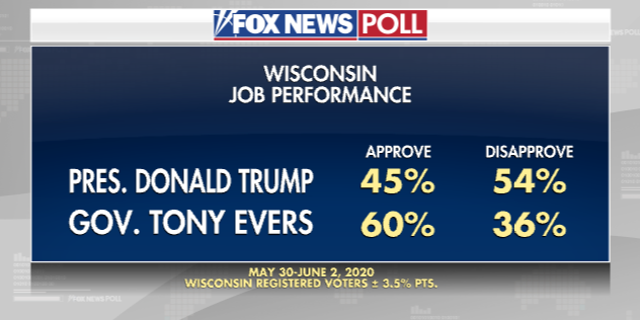 Evers’ approach to reopening Wisconsin’s economy gets mixed reviews.  Thirty-one percent say he is moving too quickly, 25 percent say too slowly, and 36 percent say things are moving at about the right pace. 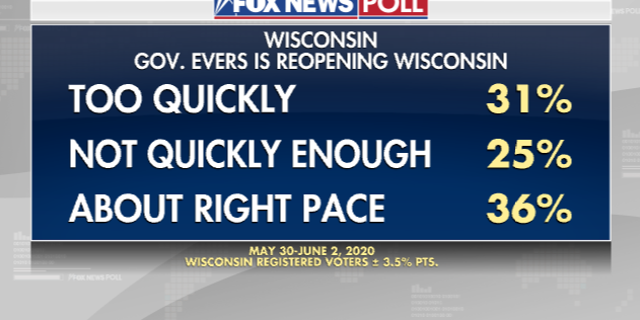 Still, Evers may have hit the right balance.  Fewer than half of Democrats think Evers is moving too quickly (43 percent), while only half of Republicans believe he is reopening the state too slowly (50 percent).

Two-thirds of Wisconsin voters are concerned about catching coronavirus (66 percent) and three-quarters have a positive view of people who wear face masks (77 percent).

By more than a two-to-one margin, they think it is important for the president to set an example for Americans by wearing a mask (65-29 percent). 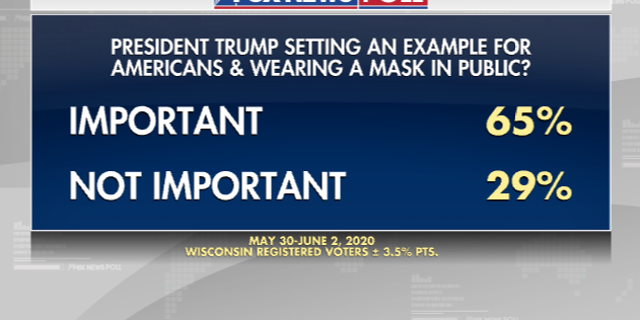 Among Republicans, 33 percent believe Trump should wear a mask and 64 percent have a favorable view of people who wear masks.

Conducted May 30-June 2, 2020 under the joint direction of Beacon Research (D) and Shaw & Company (R), this Fox News Poll includes interviews with 801 Wisconsin voters, randomly selected from a statewide voter file, who spoke with live interviewers on landlines and cellphones.  The poll has a margin of sampling error of plus or minus 3.5 percentage points for all registered voters.

La Liga President: Many try to justify failures on the field by talking about rest and schedule
Rivaldo on Griezmann: I Don't understand why the world champion and multi-million dollar transfer only comes out at the last minute
The Doctor Sociedad: The Youngster from serious injury. We are not currently considering the option of surgery
Klopp made Liverpool Champions. Now it's your turn: the game Showsport
Daughter of the owner of Valencia: This is our club and we can do whatever we want with it. Don't the fans understand?
Manchester City and Chelsea are Interested in Dean
10 years of Suarez's great save: hand saved Uruguay at the 2010 world Cup
Source https://www.foxnews.com/politics/fox-news-poll-biden-leads-trump-in-wisconsin?utm_source=feedburner&utm_medium=feed&utm_campaign=Feed%3A+foxnews%2Fmost-popular+%28Internal+-+Most+Popular+Content%29