Republicans are rightly concerned about Arizona. 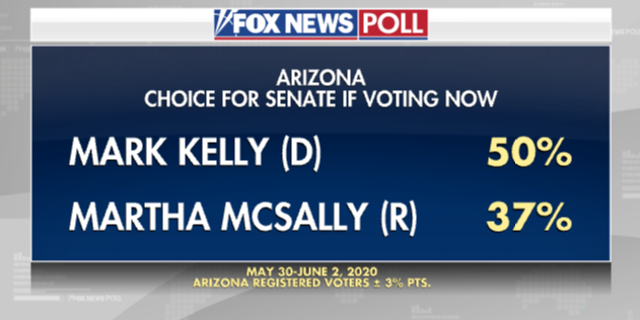 The story here is party loyalty.  Some 88 percent of Democrats back Kelly, while just 73 percent of Republicans support McSally.  Fully 13 percent of those backing President Trump in the presidential race cross over and go for Kelly.

In a head-to-head presidential ballot test, Democrat Joe Biden edges President Donald Trump by 46-42 percent.  Another 11 percent are still up for grabs.  Biden’s 4-point advantage is within the poll’s margin of sampling error. 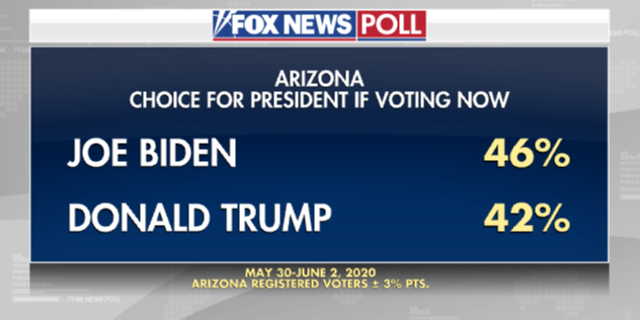 Among the 49 percent of voters who are extremely interested in the election, Biden leads Trump by a 52-42 percent margin.

In November 2018, only 32 percent of Arizona voters rated the economy negatively according to the Fox News Voter Analysis election survey. Now, 74 percent feel the economy is in bad shape.

Six in 10 Arizona voters (60 percent) are very or somewhat concerned about catching coronavirus.

For Biden, 49 percent have a favorable opinion vs. 47 percent unfavorable.

Among those who approve of Trump’s job performance, only 90 percent back him for re-election, while 4 percent go for Biden and the rest are unsure or won’t vote.

Trump’s job ratings pale in comparison to those for Republican Governor Doug Ducey.

A majority of 61 percent approves of the job Ducey is doing, nearly double the number who disapprove (33 percent). 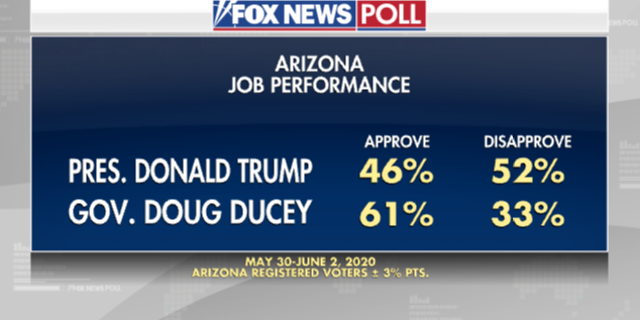 Four voters in 10 (39 percent) think Ducey is reopening the state at about the right pace, while a roughly equal number believe he is moving too quickly (40 percent).  Fifteen percent say he is not opening things quickly enough.  Arizona is still in phase one of a three-phase reopening process, although the governor says it is nearing phase two. 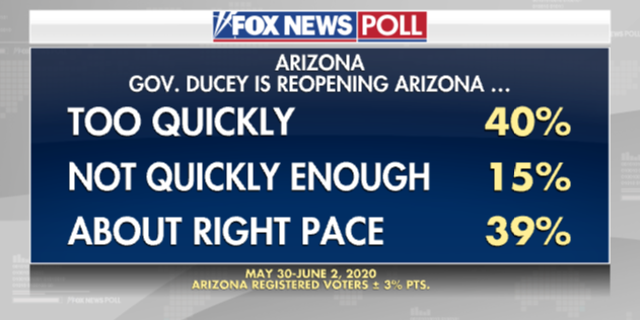 Some 75 percent of Arizona voters have a favorable opinion of people who wear masks and 65 percent believe it is important for the president to wear a mask as an example for Americans. 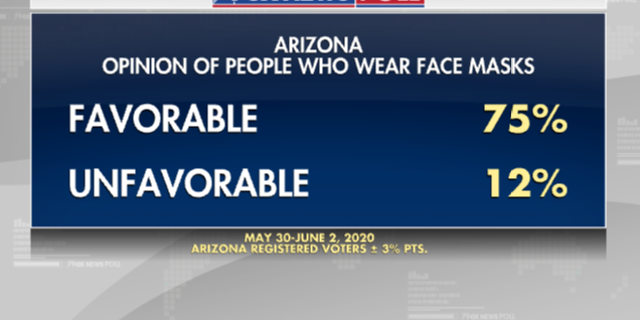 Among Democrats, 80 percent are concerned about getting the virus, 91 percent view mask wearers positively, and 92 percent say it is important the president wears one.  Each of those numbers is much lower among Republicans: 42 percent worry about catching coronavirus, 61 percent have a favorable opinion of people who wear a mask, and 37 percent feel Trump wearing a mask is important.

Conducted May 30-June 2, 2020 under the joint direction of Beacon Research (D) and Shaw & Company (R), this Fox News Poll includes interviews with 1,002 Arizona voters, randomly selected from a statewide voter file, who spoke with live interviewers on landlines and cellphones.  The poll has a margin of sampling error of plus or minus three percentage points for all registered voters.  Respondents could complete the interview in English or Spanish.

The Doctor Sociedad: The Youngster from serious injury. We are not currently considering the option of surgery
Klopp made Liverpool Champions. Now it's your turn: the game Showsport
Daughter of the owner of Valencia: This is our club and we can do whatever we want with it. Don't the fans understand?
Manchester City and Chelsea are Interested in Dean
10 years of Suarez's great save: hand saved Uruguay at the 2010 world Cup
Sane signed a contract with Bayern until 2025 (Fabrizio Romano)
Thorgan Hazard will be number 10 for Borussia next season
Source https://www.foxnews.com/politics/fox-news-poll-biden-ahead-in-arizona-kelly-trouncing-mcsally-in-senate-race?utm_source=feedburner&utm_medium=feed&utm_campaign=Feed%3A+foxnews%2Fmost-popular+%28Internal+-+Most+Popular+Content%29

Coronavirus cases are rising in 40 of 50 US states

‘Phineas and Ferb The Movie: Candace Against the Universe’ Coming to Disney+ in August

It's a scary time to be unemployed. These people still chose to get laid off

US tries to seize Iranian gas heading toward Venezuela

Balloon trips to the edge of space by 2021

COVID-19 spike in Ohio due to people not wearing masks, expert says