For years they've been seen as quiz show criminals. A new TV series may change that

In 2001, at the height of the public obsession with “Who Wants to Be a Millionaire?,” a British army major named Charles Ingram and his wife, Diana, apparently swindled the British game show. The morning after Ingram bumbled his way to a million pounds, broadcaster ITV and production company Celador realized something had been amiss: a series of coughs by the Ingrams’ alleged accomplice, Tecwen Whittock, may have led Ingram to the answers. It was a massive scandal, resulting in a court case that found all three guilty. And to this day, everyone in England has an opinion about whether they did it.

But the story of the Ingrams is largely unfamiliar in the U.S., as it was overshadowed by the terrorist attacks of Sept. 11. While the trial captivated the U.K. — and the Ingrams were vilified in the British tabloid press for years — few Americans are likely to have an opinion about the “coughing major,” so called in Britain despite the fact that Whittock was the one doing the coughing. Which is why the new miniseries “Quiz,” premiering Sunday on AMC and BBC America, may provoke a different reaction in the States than it did when it aired earlier this month in the U.K. The series, written by James Graham and directed by Stephen Frears, seeks to pose new questions about what really happened in the Ingram scandal.

“The main question is: Maybe they didn’t do it,” says Graham, who adapted the three episodes from his acclaimed West End play. “And most people in the country — and in the world — who are familiar with the story wouldn’t entertain that. Their guilt was cut and dry in the media and then in this documentary that came out a few days after the trial. I remember watching that and I couldn’t believe how obvious their guilt was. It was so apparent that they did it.”

The play, which premiered in 2017, was partially based on Bob Woffinden and James Plaskett’s 2015 book “Bad Show: The Quiz, the Cough, the Millionaire Major,” but Graham also spoke with the Ingrams, whose lives had fallen apart after the guilty verdict, as well as Celador’s Paul Smith. The play was divided into two parts, with the first offering evidence of the pair’s guilt and the second evidence of their innocence. For the series, produced by Left Bank and sold to ITV in 2018, Graham wanted to introduce evidence that has been left out of the public narrative so far.

“We’ve learned so much new information,” he notes. “It shines huge uncertainty, I think, on what people believed to be a cut and dry, closed case.” 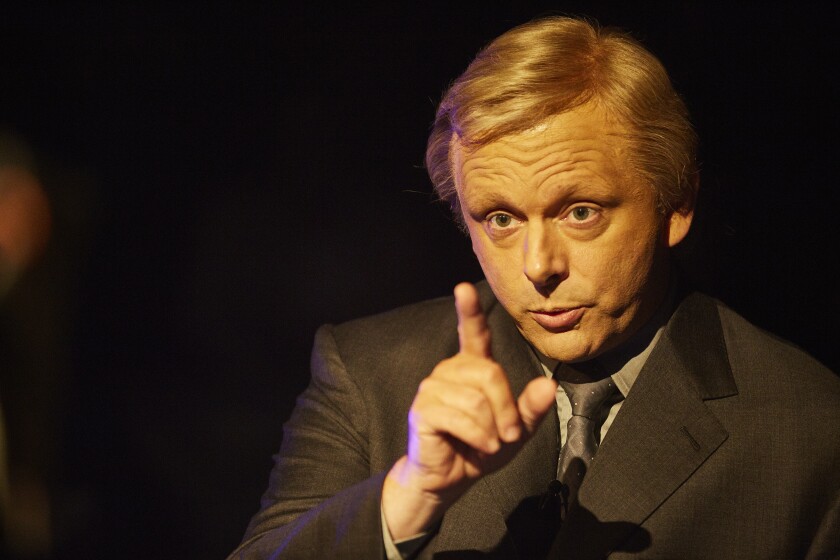 Michael Sheen as “Who Wants to Be a Millionaire?” host Chris Tarrant in “Quiz.”

The three-episode limited series was designed to ensure ambiguity. The first two episodes, which showcase the development of “Who Wants to Be a Millionaire?” and the Ingrams’ trajectory on the show, lean in the direction of “Yep, they did it.” It’s the third episode, which reveals the trial, that questions that assertion. For Frears, as well as stars Matthew Macfadyen (Charles) and Sian Clifford (Diana), the goal was to build tension through uncertainty.

“You want the viewer to make a decision and then reverse it,” says Frears. “That was where the pleasure lay …. It was trying to hold that line. It was about whether [the Ingrams] did or didn’t do it, and how fair could you be to everybody — to Celador as well as to the Ingrams.”

“We sat on set and pontificated about what really happened,” Macfadyen adds. “Because you don’t know. But ultimately you’re just playing little moments in the story. Stephen would say, ‘OK, now let’s do a really guilty take’ or do a different reading of a line so they could have fun in the cutting room …. It’s broadly sympathetic in the way it’s written, so I just played it straight and truthfully. You allow the viewers to project whatever they want to project onto you, rather than the other way around.”

Graham brought in additional context to the miniseries, including how a network of fans around the U.K. created “the Consortium,” a syndicate of people who gamed the system to get in the hot seat on “Millionaire.” The Ingrams weren’t the only ones trying to cheat their way into game show winnings, although they were the only contestants who were convicted of an actual crime.

“We knew some of it,” admits Chris Tarrant, the former host of “Millionaire,” who is portrayed in the series by Michael Sheen. “[The Consortium] just had a system, like people have systems for horse racing. We didn’t seem to be able to stop it because they weren’t actually breaking the law. They would just show up and play. They became obsessed with it.”

The series also includes the Ingrams’ court defense, which is emphasized in the third episode. For Graham, offering new evidence is about giving the viewer an opportunity to reexamine the case. And, in fact, many viewers in the U.K. spoke out on Twitter about reversing their opinion after finishing the series.

“One of the pieces of evidence for the defense that most of the public won’t know is that the guy who was accused of coughing on the right answers has a medically diagnosed, uncontrollable cough,” says Graham. “He has an asthmatic condition that was proven in court. One of the questions you might ask is, if you were planning a heist where you have to cough at very strategic times in a very clear pattern, would you select somebody who can’t actually control when they’re going to cough?”

“I absolutely believe it’s nowhere near as cut and dry as it was presented in the press, in the court or in the public’s mind,” Graham adds, though he won’t personally speculate on whether the Ingrams are innocent or guilty. “There are lots of uncertainties. And the majority of the evidence is completely circumstantial, so it requires a leap of faith to find them guilty beyond a reasonable doubt.” The cast also found themselves questioning their previously held beliefs about the coughing major. Both remember the story, but embodying Charles and Diana allowed them to reflect on how it wasn’t just tabloid fodder — it was real people being taken to task by the media and the public as well as the courts.

“The big question for me is whether or not they should have a criminal conviction,” says Clifford, who met Diana briefly on the last day of shooting. “That’s very serious and has impacted their lives immeasurably and negatively. I certainly question a lot of what I saw before. I don’t think we answer any of the questions we raise in the show — I think we leave it still pretty open-ended — but we do give a voice to a side of this story that’s never been told.”

“There’s a real pile-on thing, certainly with social media, where everyone seems to jump on board things,” Macfadyen adds. “There’s very little nuance or real, careful thought. People rush to judgment, and they rush to knowledge. They need to know what the truth is, and it’s either black or it’s white. Life isn’t like that, I don’t think.”

As for Tarrant, who hosted “Millionaire” for 15 years, there’s no ambiguity, even in light of watching the way “Quiz” reframes the known events.

“It is very well made — the production value, the acting,” Tarrant says. “But there is one basic flaw. They seem to ignore the fact that Charles Ingram was a complete and utter crook, and his wife was a crook. And they were found guilty by the jury. I sat through so many hours of tapes with the police, [going] through the show again and again and again before we went to court 18 years ago, and there’s no question at all in my mind that he is guilty as sin.”

Ribery about the robbery: the Fans and Florence to support me. Fiorentina forever!
Vinicius tested negative for the coronavirus. He will be able to play with Alaves
The tournament-the return of MLS-is still a failure. Spend in Florida (7-11 thousand cases per day), players are afraid of the virus and complain about food
Zinedine Zidane: I'm Tired of saying that real have not won anything yet. Ahead of the next final
David Silva: I will miss Manchester City💙
Giovanni Simeone: I Would like to play under my father's guidance. I dream of Atletico
Van der Vaart on Maguire: he tells his wife every day: I screwed up, but I still get paid a lot
Source https://www.latimes.com/entertainment-arts/tv/story/2020-05-31/amc-quiz-charles-diana-ingram-who-wants-to-be-a-millionaire-true-story

The ‘Glee’ curse: Is Naya Rivera the latest victim in show’s tragic history?

'It's the heart of the brand': Disney World reopens as coronavirus cases spike in Florida

'The Crown' will get a 6th season, Netflix confirms

Prosecutors want jury to be anonymous in R. Kelly trial

The Supreme Court Will Let Us See Trump’s Taxes, Just Not Before We Vote

How “abolish ICE” helped bring abolitionist ideas into the mainstream

US sanctions Chinese officials over repression of minorities

J.J. Villard On Bringing His Twisted Take On ‘Fairy Tales’ To Adult Swim

The Category Is: Renewals! Legendary Gets Season 2 at HBO Max

We won't be seeing Trump's taxes before the election

Betsy DeVos says kids need to return to classroom: 'There are no excuses for sowing fear'