While the economy has sputtered this spring and summer during the Covid-19 pandemic, high-speed rail projects have scored key wins.
XpressWest, a passenger rail project between Las Vegas and greater Los Angeles, a distance of about 270 miles, received the rights two weeks ago to build on the Interstate 15 median. Brightline, the Miami company that runs the project, plans to break ground later this year, with $5 billion of private funding, $4.2 billion of which will come in the form of tax-exempt bonds. Trains will reach speeds of 200 mph. It's expected to be completed in late 2023.

A Texas project that will offer 90-minute-or-less trips between Houston and Dallas received an important environmental review in May after a six-year wait. It also won a state court case this spring that gives it eminent domain rights, which will simplify the process of acquiring land between the two cities, which lie 240 miles apart.

The first US modern high-speed rail efforts emerged in 1965 in response to Japanese rail innovations. Legislation passed that year led to trains that traveled over 100mph between New York and Washington, DC. But high-speed rail soon stalled as the railroad industry collapsed in the 1970s.

Efforts began to speed up Northeast corridor train service in the 1990s, and the Acela launched in 2000. But the service isn't considered true high-speed rail without investment in the tracks and infrastructure, and Amtrak has struggled to find funding. High-speed rail interest re-emerged in 2008 when former President Obama pledged billions.

High-speed rail advocates say that 2020 may be a turning point for US high-speed rail development, which has long lagged other developed nations. Japan began building high-speed rail in the 1960s. Europe followed in the 1980s and 1990s. Africa's first high-speed rail train came in 2018. China surpassed everyone in the last 12 years, building the world's largest high-speed rail network, stretching thousands of miles, and moving passengers at speeds of up to 217 mph. 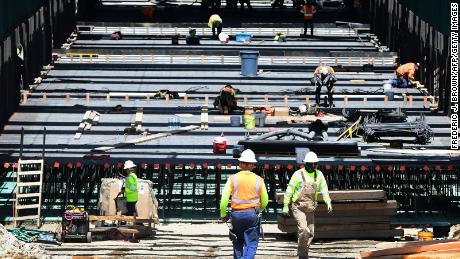 Andy Kunz, president of the US High Speed Rail Association, said investors used to roll their eyes at him when he started speaking at conferences in 2010. Now he's watching Wall Street invest in high speed rail.

Global Infrastructure Partners, a New York fund, bought an Italian high-speed rail operator in 2018. Fortress Investment Group, a New York firm, funds Brightline, which believes there are a close to a dozen other potential projects in the US that fits its model, according to a spokesman.

Kunz said that he recently heard for the first time from Goldman Sachs, regarding speaking in a Webinar about high-speed rail.

"This is not fantasy or someone's dream," Kunz said. "This is a proven technology and a reality in 20 nations all over the world."

In the Pacific Northwest, a project to connect Portland, Seattle and Vancouver with one-hour trips, has drawn an investment from Microsoft to study the feasibility.

The private sector interest comes as California's publicly funded high-speed rail project has been criticized by state legislators and President Trump, who has worked to pull federal funding.

Brian Kelly, CEO of California High Speed Rail Authority believes that private sector investment in projects like the Vegas-to-LA connection, portends good things for his own project. He expects a private sector partner to join once risks to the San Francisco-to-LA project are resolved, such as environmental approvals and land to build on.

"Somebody once said to me, 'building a mega-project is like surviving a series of near-death experiences,'" Kelly said. "It's true."

Nuno about 0:1 with Sevilla: Disappointment. Wolverhampton conceded too often in the final minutes
Immobile about Newcastle: They called my agent when the sheikhs bought the club
Liverpool are confident they will sign Tiago. The player has already agreed a contract and is pressing Bayern
Our judging = fear and helplessness. Instead of Kaloshin and Kashshai – a soulless system that does not care
Lothar Matteus: Messi is not enough to pass such a Bayern. I am not afraid of Barca
Thomas Tuchel: Mbappe will play Atalanta if nothing happens
Lille acquired 20-year-old forward David from Gent. He is the best sniper of the CONCACAF Cup
Source https://edition.cnn.com/2020/07/08/energy/high-speed-rail-us/index.html?utm_source=feedburner&utm_medium=feed&utm_campaign=Feed%3A+rss%2Fcnn_latest+%28RSS%3A+CNN+-+Most+Recent%29

Suresh Raina gets inked ahead of IPL 2020

4 Things You Should Change About Your Email Marketing