Some day, and possibly sooner than they think, Republican lawmakers will be forced to confront the reality that they cannot sustain a major American political party in the 21st century on a strict diet of voter suppression, discouragement and disenfranchisement.

That reckoning came a big step closer on Wednesday, when a federal appeals court in Florida dealt a major setback to one of the more galling G.O.P. anti-voter measures of recent years — a modern-day poll tax in Florida aimed at keeping hundreds of thousands of people with criminal records away from the ballot box.

How to Get 1.4 Million New Voters

It’s the late ’90s. You make some dumb choices. You get charged with robbing a Subway. You spend four years in prison. It’s 1995. Your friends rob a KFC. You drive the getaway car. Four years in jail. That was then. Now you’re a pastor at a church. Today, you run a successful flooring business. You’ve paid your dues. You’ve made amends. Now you want to have a voice in the world. But, you live in Florida. The Sunshine State is one of only four states that permanently bars felons from casting a ballot. And there are 1.7 estimated million people there who are disenfranchised due to a prior felony conviction. Over 10% of adults in the state cannot vote. Nearly one in four black adults is disenfranchised. The law does provide one way for former felons to get their voting rights back. But don’t get your hopes up. Then you have to wait another 10, 12 years. Why? Because there is a backlog of about 10,000 cases. Finally, as many as 20 years later, you get your big day in court. If your hearing was in front of Gov. Rick Scott, you almost certainly heard this: “I deny restoration of civil rights. I deny restoration of civil rights. At this point, I’m going to deny restoration of civil rights. I deny restoration of civil rights. I deny restoration of civil rights. So it’s all denied. Well, first off, thanks for your work for the state.” “Thank you.” “At this point, I don’t feel comfortable giving your restoration of civil rights. But congratulations on your work, and congratulations on your daughter.” “Thank you.” The law gives the governor and his cabinet members the power to decide our fate. And there’s no rules or guidelines. “There is no right to clemency. There’s no standards. The governor goes first. If I deny, then it’s over.” The governor can turn you away for any reason no matter how petty. “Just don’t get traffic tickets all the time. I mean, I mean it just says something. It says you don’t care about the law.” And it’s not just me. Governor Scott has denied way more people than his predecessors. In the last eight years, the number of disenfranchised citizens in Florida has increased by nearly 200,000 people. But wait, how did we even get here? The law is 150 years old and was designed to keep people that looked like me from voting. When the Civil War ended, freed slaves represented almost half of Florida’s population. The state’s all-white lawmakers came up with a racist plan to prevent blacks from gaining power. They created Black Codes, not-so-subtly named laws that subjected black people to harsh sentences for minor offenses. They then barred anyone with a conviction from voting. They didn’t even try to hide it. For the next 150 years, no one questioned the law. And now, here we are. “Florida voters will get to decide on a ballot referendum that would restore voting rights to felons who have done their time.” “Murderers and sex offenders are excluded.” “To pass Amendment 4, voters would need 60% or more in November.” Vote “Yes” in November to restore voting rights. Be our voice today so everyone invested in the future of Florida can help shape that future. 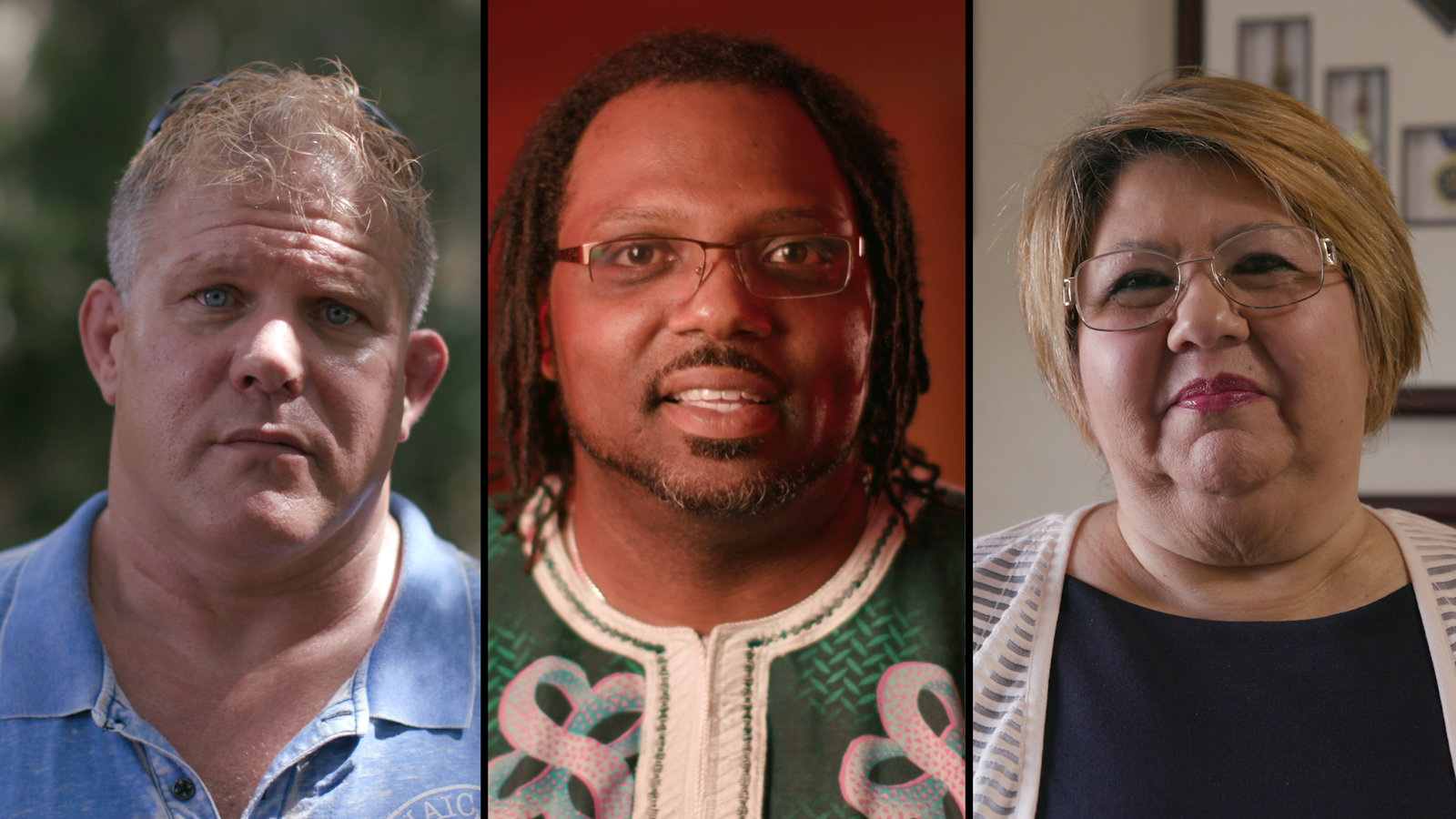 The case, involving a lawsuit brought by 17 ex-felons, is about who gets to exercise the most fundamental constitutional right of all — the right to vote. And because Florida is the biggest battleground state in the country, the resolution of the case could well determine who becomes the next president.

Until 2018, Florida was one of three states that imposed a lifetime voting ban on former felons. Like most felon-disenfranchisement laws, Florida’s was a 19th-century relic drafted to keep newly freed black slaves from having a political voice. It continued to exert its racially biased effect into the 21st century, when more than one in five black Floridians were ineligible to vote because of a criminal conviction.

Felon-disenfranchisement laws are constitutional, but that doesn’t mean they’re any good. In addition to their racist origins, they function to deny the most fundamental right in a democratic society to those who need the most help in returning to full membership in that society.

States across the country have come to understand the harm caused by this exclusion, and many have recently removed or reduced their barriers to voting by ex-felons. Florida’s voters had their say in the 2018 midterms, when they overwhelmingly backed Amendment 4, a ballot initiative abolishing the lifetime ban from the State Constitution for all except those convicted of murder or felony sex offenses. In an instant, about 1.4 million Floridians, representing a quarter of all disenfranchised felons in the country, became eligible to register to vote — one of the biggest single re-enfranchisements in American history.

Amendment 4 was also a bipartisan success, passing with more than 64 percent of the vote in the same year that Republicans won both the governorship and a key Senate seat. That’s no surprise: Republicans have criminal records, too, and everyone gets the unfairness of being barred from voting for this reason, and certainly for life.

Problem solved, right? Not so fast.

Florida Republican officials, apparently terrified that too many of their constituents would suddenly flood the polls, vote Democratic and endanger their hold on power, jumped into action. They passed a law that interpreted the amendment to require the payment of all fines, fees and restitution imposed by a court before the right to vote would be restored.

The lawmakers defend the law by arguing that the state has every right to demand that money, but let’s be clear: They know full well that they aren’t ever going to get most of it. In 2018, Florida collected only 20 percent of more than $250 million in outstanding court-related fines and fees. That’s because criminal defendants are not, as a rule, flush with cash. A vast majority are so poor they qualify for a court-appointed lawyer; there’s no way they can afford court costs and fines, which run into the hundreds and often thousands or tens of thousands of dollars. Many don’t even know the size of their debt, because Florida doesn’t maintain a statewide system to track who owes what.

In Wednesday’s unanimous opinion, a three-judge panel of the United States Court of Appeals for the 11th Circuit agreed that the state has a general interest in collecting fines and fees. But that doesn’t hold when the people who owe those costs cannot afford them. “The continued disenfranchisement of felons who are genuinely unable to pay [court costs] and who have made a good-faith effort to do so, does not further any legitimate state interest that we can discern,” the court said.

Meanwhile, those with the means to pay off their court costs are set. “The felon with money in the bank will be re-enfranchised,” the court said, “but the felon who can’t will continue to be barred.” In other words, if you are a Floridian with a criminal record, your fundamental constitutional right to vote depends on how much money you have.

This is what used to be called a poll tax, which Southern states once imposed to keep poorer blacks from voting, until the 24th Amendment barred the practice in 1964.

For now, the court avoided holding that the Florida law was a poll tax, grounding its reasoning instead in the 14th Amendment’s guarantee of equal protection. A state violates that guarantee, the Supreme Court has held, “whenever it makes the affluence of the voter or payment of any fee an electoral standard.” Florida may disenfranchise all its felons if it chooses to, but once it restores their right to vote, as it did in 2018, it can’t condition the exercise of that right on a voter’s wealth.

The appeals court’s ruling is limited to the 17 plaintiffs, all indigent ex-felons, but its reasoning applies to the vast majority of Floridians whose voting rights were restored by Amendment 4, most of whom are in a financial position similar to that of the plaintiffs. The case now returns to the trial court, which will hold a trial in April to decide whether the law is a poll tax or must be invalidated under any other provision of the Constitution.

Even if all 1.4 million Floridians with a criminal record were re-enfranchised tomorrow, the Republicans have already achieved one of their key goals: to foster confusion and uncertainty, which can discourage many eligible voters from turning out. That’s why it is all the more important for newly enfranchised citizens not to lose hope, and to get out and register.

Republicans will continue to practice their dark arts of voter suppression as long as they can, secure in the belief that when the number of voters goes down, their electoral prospects go up — until they don’t.

How can photographers capture human connection in the age of coronavirus?

New York governor says virus is spreading like 'slow-moving hurricane' across US. More than 6,000 are dead

Is Keerthy Suresh marrying the son of a BJP leader?

NFL Draft 2020: Giants could add a WR for depth purposes