Fired Minneapolis police officer Derek Chauvin has been arrested days after the death of George Floyd, which sparked protests and unrest in the city. Hennepin County Attorney Mike Freeman said Chauvin has been charged with third-degree murder and manslaughter.

John Harrington, the commissioner of the Minnesota Department of Public Safety, said the Bureau of Criminal Apprehension has taken Chauvin into custody. Floyd was seen on a disturbing video begging for air as Chauvin pressed his knee into his neck.

Freeman said the investigation is ongoing into the other three officers involved, all of whom have been fired. Freeman said his office wanted to focus on the "most dangerous perpetrator." Chauvin was arrested at 11:44 a.m. in Minneapolis, according to the BCA.

"This is by far the fastest we have ever charged a police officer," Freeman said.

The FBI is also investigating whether civil rights charges are appropriate. When Freeman spoke with federal prosecutors at a press conference Thursday night, both indicated a charging decision was still far off and pending an investigation by the BCA and FBI.

Freeman said he developed the appropriate evidence to file the charge in the hours since. Overnight, violence flared in the Twin Cities, with protesters torching the police station where the four officers worked. 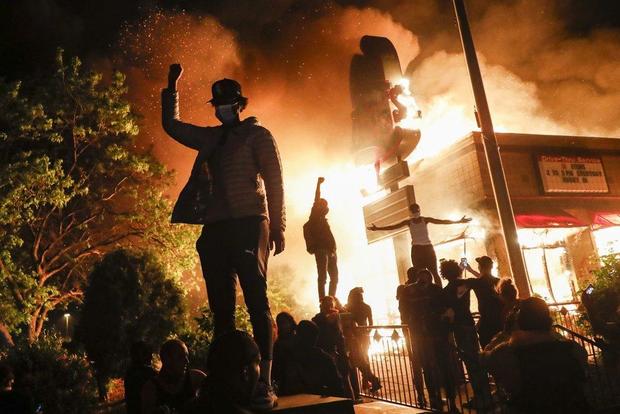 Protestors demonstrate outside of a burning fast food restaurant, Friday, May 29, 2020, in Minneapolis over the police death of George Floyd. AP/John Minchillo

Benjamin Crump, an attorney who is representing Floyd's family, called the arrest "a step on the road to justice."

"Now the officers who stood by and did NOTHING to save George need to be arrested and charged as well," Crump wrote.

This is a developing story. Check back for updates.

Jurgen Klopp: We are not thinking about next season, but about this one. There is much more to come
Inter is ready to buy out Sanchez from Manchester United for 20 million euros (Goal)
Werder fans are the best: they supported the team with a tractor emblem and thanked the Union with a hundred cases of beer
Flick about the Cup final with Bayer: It will not be like in the championship. They can hurt us
Holland will play in Dortmund and under 9-m number from the next season
Solskjaere and Lampard are among the contenders for the title of best coach in June in the Premier League
Umtiti injured his left knee. He won't have surgery
Source https://www.cbsnews.com/news/derek-chauvin-arrested-george-floyd-death-third-degree-murder-manslaughter/

Tucker Carlson: Who are the criminals destroying your country?

Have Americans Warmed to Calls to ‘Defund the Police’?

READ: The Declaration of Independence

Mike Tyson: I was a drunk and high ‘pig’ while filming ‘The Hangover’